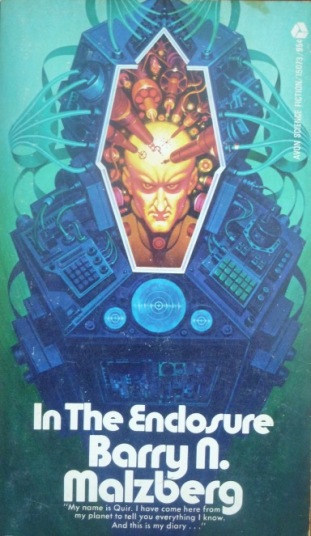 (Davis Meltzer’s cover for the 1973 edition)

Fresh off Malzberg’s intriguing young adult novel, Conversations (1975), I picked up a copy of the altogether more disturbing, transfixing, unnervingly prescient, and at moments, brilliant In The Enclosure (1972).  As with many of Malzberg’s oeuvre, the work is infused with a steady dose of metafiction — our hero laments (and we writhe along with him in a malaise of unease), “I will never really know” (189).  Just as Quir is unsure of his own reality, his diaristic words — which the reader is desperate to hold on to — are admittedly, “an impression, a conception, nothing more” (190).

Combining the science fiction trope of implanted memories with the literary narrative mode of the unreliable narrator creates an overwhelmingly uncomfortable gulf between reality and constructed reality.  The result, the overpowering desire to pick up a piece of pulp science fiction where the future is rosy, technology = happiness, the kids smart, where rockets sprout up in backyards, and villains are of an altogether different shape.

Here we are: in the enclosure.  It has been some two years and four months since we were placed here (I have fully assimilated a sense of their chronology) and now, past the initial riots and educative tortures, things are comfortable” (5).

Quir is a humanoid alien who could pass for a human — In The Enclosure is his diary of his imprisonment, along with a few hundred of his kind, on Earth.  Humans imprisoned his people when they landed, tortured them, and dangled promises of eventual freedom.  The aliens have no memory of  their homeworld and why they were sent out to Earth.  They’ve also discovered that they have no ability to prevent their immense technological secrets from falling into the hands of the humans.  They conclude that they’ve been conditioned to divulge their knowledge.  But no one knows the reason.

The paradox is brutal — mankind’s problems (overpopulation, disease, the inability to develop space travel, etc) are solved while their saviors, the aliens, remain imprisoned, tortured, and subjected to continuous questions from their “therapists.”

Quir and his people do remember the journey to Earth.  They adhered to rigorous hierarchy, they had a master of rituals which reinforced the hierarchy, but even that feels arbitrary, constructed, artificial….  That skeletal framework of a system crumbles entirely in the enclosure.  Quir, scared from the experience and the inability to remember his own pre-voyage past retreats into himself, preying on female aliens in the hallways, ruminating on the reasons for the imprisonment.

The plot thickens when Quir admits to his therapist that there’s been an escape planned.  It’s never really certain that there was an actually an escape planned, or an elaborate trap.  However, Quir is so torn that he resolves to escape with his people.  But their knowledge of the world is limited to the enclosure, the spaceship, nothing more.  And for many, unusual memories are slowly returning.

I found myself unable to write about In The Enclosure for a few weeks after I had finished.  I was somewhat disillusioned by the end (it couldn’t really end any other way).  And, as I mentioned in the beginning, the gulf Malzberg excavates between what is real and what is constructed is so vast will cause frustration in many readers.  That said, the prescient undercurrents of the work (unjust imprisonment without end/Guantanamo bay) makes it even more unsettling.

Malzberg’s prose is impeccable (he started off as a playwright).  Malzberg definitely prefers dialogue over detailed descriptions.  For example, the exchanges between Quir and his succession of therapists are spine-chilling.

“Do you find the meals adequate, the staff satisfactory, the circumstances comfortable?  Do you have any illnesses?”

“We never have any illnesses.”

“But you might,” the menacing alien [human] says, nodding at the others.  The others who have been standing against the wall, fondling their armaments nod.  “You might indeed.”

All science fiction fans who can tolerate a profoundly dark vision should pick up a copy.  I cannot wait to track down another of Malzberg’s lesser known novels.