Fred Hoyle’s Ossian’s Ride (1959) is a disappointing sci-fi thriller which fails to live up to its intriguing premise: why is unusual technology flowing from unknown sources from far Western Ireland (a handy map is provided) beyond the Erin Curtain?  Get it, Ireland’s IRON CURTAIN…  This wobbly little thriller conjures but little thrill, the grand mystery is all too obvious/abrupt/giggle-inducing, and, most damaging, intended or not the political message is an endorsement of a police state as long as it encourages technological advancement.

The first edition cover proclaims Ossian’s Ride “a novel by a famous astronomer” — indeed, Fred Hoyle was much more famous in scientific circles than he ever was as a sci-fi author (he even coined the phrase “Big Bang” but under a much different context than might be expected).  With his scientific background in mind, his prose didn’t strike me as as egregious as some reviewers have noted.  The descriptions are simple and the characterizations flat but that isn’t uncommon in a large majority of 50s sci-fi novels.

Thomas Sherwood, a recent college graduate of mathematics, is hired by British Intelligence to find out the origins of new technology flowing from beyond the Erin Curtain in Ireland.  Entire cities in Ireland are turning into ultra-modern and ultra-geometric metropolises.  Gigantic roads slither across rural expanses.  The British government is suspicious of the rising power of Ireland, and of course, the rest of world wants to get their hands on the goods.  The country is filled with spies and Thomas Sherwood decides that “maintaining a low profile” might not be the best way — instead, he presents himself as Thomas Sherwood and acts like the student he is.  Thomas ultimate goal is to sneak past the Erin Curtain and infiltrate I.C.E (Industrial Corporation of Éire) in order to find out who/what is behind all the advances.

Along the way he must run from helicopters, brave the frigid ocean in a small boat, run from tractors, scamper down cliffs, down rocks, through bogs, avoid agents from other organizations, avoid being pulled into infighting between agents, maintain his student persona, run away from fake priests, run away from a fast yet obese man, avoid drugged drinks, fall (twice) in love…

The entire gamut of the spy genre is hurled at us with earnest force and little effect.  In the end, it would have been much easier for Thomas to simply ask I.C.E for a job — especially since they have virtually unlimited money set aside to hire promising young minds and established older scientists.

The mystery?  I won’t reveal the mystery but it’s not that mysterious and the explanation takes up only a few pages.  The last third of the novel is the most ramshackle part of the narrative.  Thomas gets hired, someone tries to murder him, he figures out the riddle, falls in love, and gives in to the supermen.  And it’s this part that ruins the book.  Thomas decides that he might as well work for the “supermen” despite the fact that they’ve instituted a police state across the country.  Hoyle might personally be against such states but throughout Thomas displays good sense (if somewhat foolish on occasion) and it feels somewhat against his character.   In the end Hoyle is much more interested in talking about Thomas and his new love interest (a very unequal relationship) walking towards the new future than discussing the chilling implications of his actions.

I found this conclusion extremely unsatisfying.  Hoyle’s technological advances are all positive — they could indeed help thousands!  But are we really that blinded to the dangers of one corporation hiring all the most brilliant minds with no government oversight?  What happens when more controversial technologies are promulgated?  Can anyone do anything about it?  Or, are we, as Thomas, supposed to simply give in and collaborate? 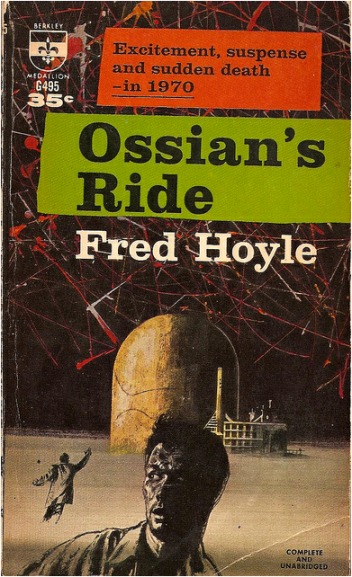 (Richard Powers’ cover for the 1961 edition)

(Uncredited cover for the 1967 edition)

(Lawrence Ratzkin’s cover for the 1965 edition)

(Uncredited cover for the 1968 edition — at first glance,  the work of Don Punchatz?)