A wonderful selection of Marx Book purchases….  All of them are high on my to read list!  I hadn’t heard of Josephine Saxton — she’s considered an inventive sf fabulist — until I read a review of her novel Vector for Seven (1970) on SF Mistressworks, a review collating blog which I highly recommend for any fan of science fiction.  There are so many great works by female sci-fi authors out there waiting to be rediscovered on dusty used bookstore shelves….

I enjoyed James Gunn’s Station in Space (1958), a thematically linked short story collection depicting mankind’s first steps into space, so I picked up a copy of one of his better known fix-up novels, The Joy Makers (1961).

And, well, the incredibly alluring description on the back cover of Mark S. Geston’s Lords of the Starship (1967) speaks for itself… 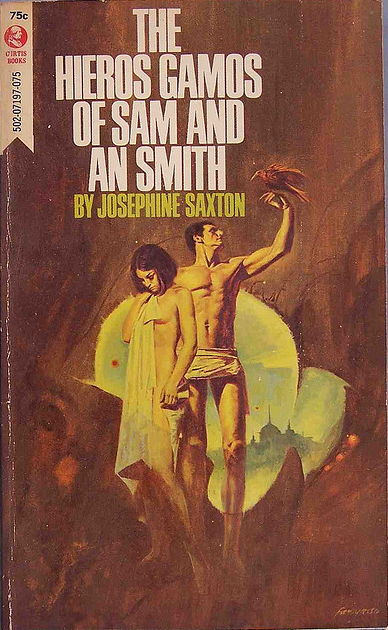 (Jack Fargasso’s cover for the 1969 edition)

From back cover: “A solitary young earthman is drawn into a new world of chaos and danger… destiny and desire.  It was a bleak and lonely countryside over which he, “the boy,” had been wandering for many years.  A rare tree, bird, or wild animal was the only life he encountered during his desolate trek over the nearly barren land.  His greatest and innermost fear was contact with others of his own species.  Then one day a desperate cry, not far from a place he had come to rest, overcame his sense of self-preservation, drawing him forward into a life of potential danger.  Often he thought of turning back, but somehow he knew this was impossible.  He must accept his new fate, overcome his fear of the reatest of all human commitments… before it was too late.”

(William Hofmann’s cover for the 1961 edition)

From the back cover: “Why be miserable?  Dial P-L-E-A-S-U-R.  Happiness guaranteed by Hedonics Inc.  Sounds like a skin-game to you and me.  But in James Gunn’s future it’s the slogan of a legitimate and successful business.  Product: anything you need to make you happy.  THE JOY MAKERS rips the lid off: describes pleasures that will make your skin tingle and your mind rattle, tells a story of men and women who are so hysterically HAPPY they turn in  strange new directions for diversion.”

From the back cover: “It was a remarkable world — for the Church and the State had become one — one supreme Authority that encouraged, indeed, ordered its people to breed, and breed, and breed again.  And punished if they did not… But few fought the Authority.  For the conceptual rites were so inspiring.  And not all sinful.  No, indeed.  The only in was not having children.  Fo that sin, a man — or a woman — could die.”

(John Schoenherr’s cover for the 1967 edition)

From the back cover: “The ship was to be seven miles long, a third of a mile in diameter and have a wingspread of three and a half mies.  It would take two and a half centuries to construct.  Its announced purpose: to carry humanity away from its ruined world, from the world that had become a perpetual purgatory.  To build this vast ship would require the undivided activity of an entire nation and would mean carrying out a ruthless program of war and conquest, of annihilation and reconstruction, of education and rediscovery.  But was this starship really what it was claimed to be?  Or was there a greater secret behinds its incredible cost — a secret so strange that no man dared reveal it?”