(Ed Emshwiller’s cover for the 1952 edition)

After Jack Vance’s recent passing I decided that as an informal remembrance I’d review one of his novels.  However Big Planet (1952), the only unread novel of his I had on my shelf, is from early in his career and far from the level of his best works.  Of his novels I’ve read, Wyst: Alastor, 1716 (1978) and the loose sequel to Big Planet, Showboard World (1975) were the most satisfying.  The Blue World (1966), Marune: Alastor, 933 (1975), and City of the Chasch (1968) were all enjoyable adventure tales set in fantastic worlds.  I recommend those — along with his more famous novels — before picking up a copy of Big Planet.

Over the course of its publication history Big Planet was cut and modified multiple times from its original magazine form.  A restored text was published in 1978…  Unfortunately, I read the 1957 Ace edition (with the fun Ed Emshwiller cover — below) which appears to be shorter than the original magazine version.  If any of my readers know more on the different versions and what was excised/added I’d love to know.

The lushly realized eponymous Big Planet is a vast decentralized world comprised of various groups from Earth who sought to escape the centralizing tendencies and urbanization of the home planet (Gypsies, political dissidents, religious cultists, nomadic tribesmen, etc).  As a result of a critical lack of many natural resources (metal, oil, etc) common on Earth, the inhabitants of Big Planet are technologically primitive.  Earth’s government, in an effort to keep the planet from posing any threat, maintains an embargo of metal and other items.

This basic premise, the lack of natural resources and the vast size of the landmasses, informs the rest of Vance’s world building.  How do the Big Planet cultures develop basic technologies without metal and plastic?  How do the societies communicate over great distances?  And travel?  How isolated would the people be?  What would they know of Earth if they rarely come in contact with people from their old home?  As our heroes traverse the surface meeting various cultures, Vance explores how each society has adapted to these factors.

The narrative concerns Claude Glystra, an investigator sent from Earth, who seeks to understand why the Bajarnum of Beaujolais has managed to gain so much power on Big Planet.  His other concerns include investigating Big Planet’s slave trade and halting the importation of metal and other weapons.  However, before he can land his space craft the vessel is sabotaged and Glystra crashes 40,000 miles away from the only safe haven on the planet, Earth Enclave.  Glystra and his team, some of whom may or may not be traitorous (and in the employ of the Bajarnum of Beaujolais), must use their limited resources to traverse the great expanse.

On the way they encounter fantastically bizarre governments, giant toad creatures (well, perhaps), unusual means of transportation, and as all novels of the time did, a ravishing young love interest.  By far the most intriguing portion of the novel concerns the city pseudo-Utopian city of Kirstendale, the secret of which I will not give away for it is downright delightful.  Cities like Kirstendale form the core of many of his later novels.

Big Planet does manage to set itself apart from the vast quantity of other pulp adventures set on alien planets by including many intriguing religious, societal, political, ethnographical, and biological details — despite the short length (a mere 158 pages) — about the world.  Vance would refine this skill — often via an index or even short footnotes — in later novels. 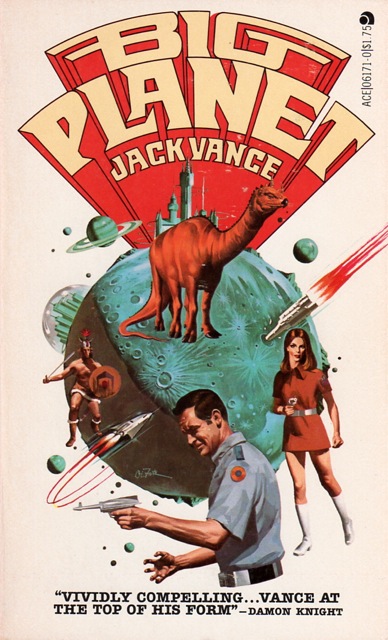 (Steve Hickman’s cover for the 1978 edition) 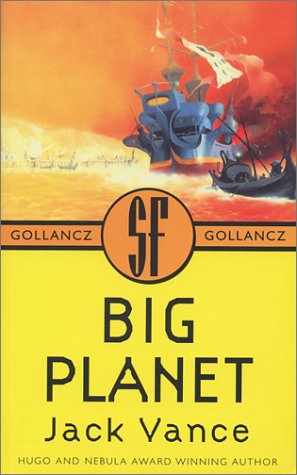 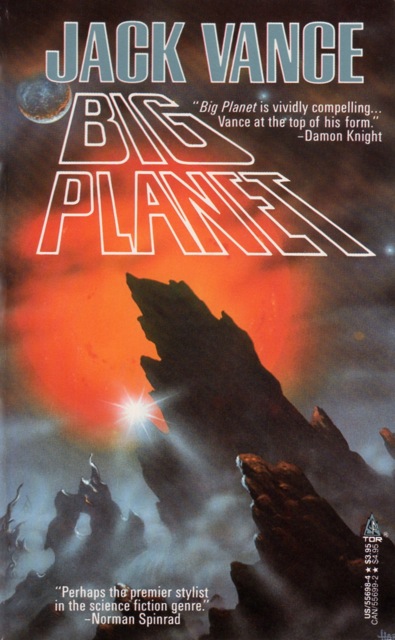 (Oliviero Berni’s cover for the 1985 edition) 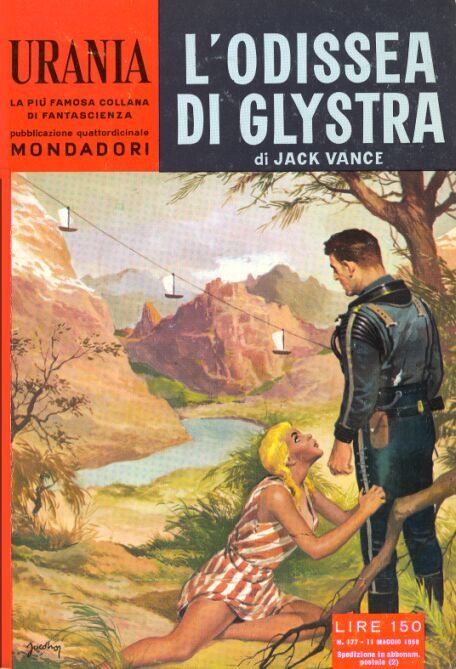 (Carolo Jacobo’s cover for the 1958 edition)

(Franco Bambilla’s cover for the 2008 edition)