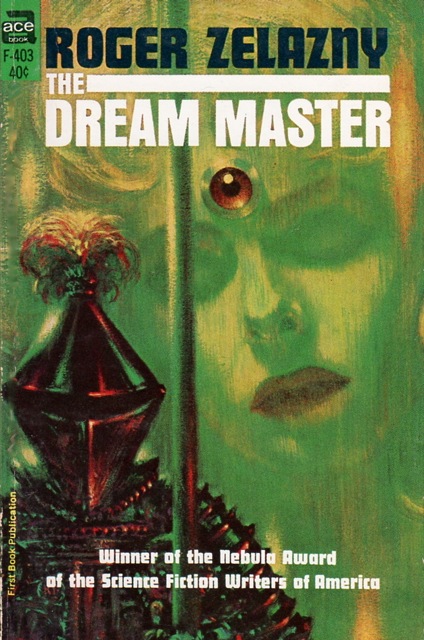 Roger Zelazny’s The Dream Master (1966)—expanded from the Nebula Award winning novella “He Who Shapes” (1965)—revolves around the Freudian notion of the centrality of dreams and importance of decoding dreams for psychoanalytical treatment.  Susan Parman, in Dream and Culture (1990), points out that Freud was initially focused on “treating ‘abnormal’ patients” but soon “expanded his theory of psychoanalysis to explain puzzling events in ‘normal’ behavior” including dreams.  Freud’s influential work The Interpretation of Dreams (1899) argued that the “dream expresses the secret wishes of the soul” where the dreamscape is the “arena” in which good and bad forces are engaged in a struggle.  Thus, the dream is a message that must be deciphered by an “allegorical hermeneutician” (Parman, 104).

Zelazny posits a future where the allegorical hermeneutician does not need to listen to the vague recollections of his/her patient.  Rather, a neuroparticipant attaches the patient to a complex machine which not only allows access to the dream arenas but facilitates the creation of particular dreams.  How the patient reacts in the constructed landscapes is an integral part of the psychoanalytic treatment program.  Thus, the format and forms are modified by the neuroparticipant while the patient fills the stage with emotional significance and narrows in on particular symbols (9).

Unsurprisingly considering the work’s themes, The Dream Master is drenched with layers of often hilarious psychoanalytical references: the main character’s smothering “mother-like” paternalism, a dog with an artificially enhanced intelligence named Sigmund who exercises his dominance but patrolling the streets looking for primitive dogs, Render’s “totemic” cufflinks, and of course the voyages though the dreamscapes.  I have found that this meaning rich way of telling is very characteristic of the Zelazny novels I have previous read: i.e. his two masterpieces This Immortal (1966) and Lord of Light (1967) as well as the underwhelming and all-too-brief Jack of Shadows (1971).

The Dream Master contains a playful satirical bent paired with some delightful prose, for example the first line “Lonely as it was, with the blood and all, Render could sense that it was about to end” (5).  Also, Zelazny’s structural experimentation–the slow dissolution of the primary narrative—perfectly blends with the trajectory of the work and the evolution of the characters.  Although Brian N. Malzberg’s best novels would take similar Freudian themes and structure experimentation to more radical and poignant levels, The Dream Master, despite the occasional obtuse passage or sequence of passages, is highly readable.

Recommended for all fans of 60s SF.

Charles Render is a famous neuroparticipant who pioneered psychiatric treatment via engineering dreams.  His name is selected for a reason, for Render he tears away the presumptions of his patients by shaping their dreams.  The narrative starts with a bang as Render recreates a version of the assassination of Julius Caesar in the Roman forum (historically inaccurate but who cares) in order to convince a politically malleable politician that he really craves enemies and conflict!  But treatments such as these are passé and simply too easy for his genius.  He craves a challenge.

And the challenge takes the form of a Eileen Shallot.  Eileen, born with congenital blindness, draws on her family’s wealth to pay for her extensive education.  She too desires to be a neuroparticipant!  The problem is not her desire, ambition, and intelligence but the very fact that she has never been able to see.  How can one form a dream for a patient if you have never “seen” a dream in the same way?  Eileen is relentless in her desire to see through the eyes of her patients.  Although initially suspicious and worried about the ramifications of such a radical experiment, Render decides to expose her to visual stimuli via dreamscapes generated by his machine.  But little does he know how dangerous her mind can be.

Render views himself as the intellectual outsider, the man who really knows how the world is working because of his area of study.  Hee records long pseudo-intellectual ruminations on the slow decay of the world and the subconscious forces that are at play: “because of the enormous masses of humanity, hectically changing positions in a space everyday throughout the cities of the world, there has come into necessary being a series of totally inhuman controls upon these movements” (57).  But he too is controlled by his subconscious (of course, a very Freudian depiction)—he serves as a surrogate mother to his child, dotting on his every need, terrified of the slightest injuries, desperate to shape every element of his life.  He obsession drives him to ignore all the danger signs that occur during his “treatment” of Eileen.

Eileen is guided in her daily life by a dog named Sigmund whose intelligence and vocal abilities are artificially enhanced.  Despite his limited vocabulary Sigmund is the observer who really knows how much danger Render and Eileen is in.  But he too (like Eileen, like Render) is governed by his subconscious (animalistic) desires, to assert his dominance over less intelligent dogs.  One of the more bizarre passages concerns one of Sigmund’s countryside perambulations where he encounters a normal hound:

“He [Sigmund the dog] made a laughing noise.

The tail continued to wag.

It ran in a small circle, lowered its head between its front paws and looked at him.

He bared his fangs and snarled.  Then he lept at it and bit it on the shoulder” (70).

As the story progresses and minds fragment the narrative structure simultaneously decays.  The viewpoints shift widely between Render’s ramblings, Eileen’s observations, dream visions, dog visions, dog observations, the observations of seemingly random individuals passing the other characters in the street….

Freud has never been so fun.

(Uncredited cover for the 1973 edition) 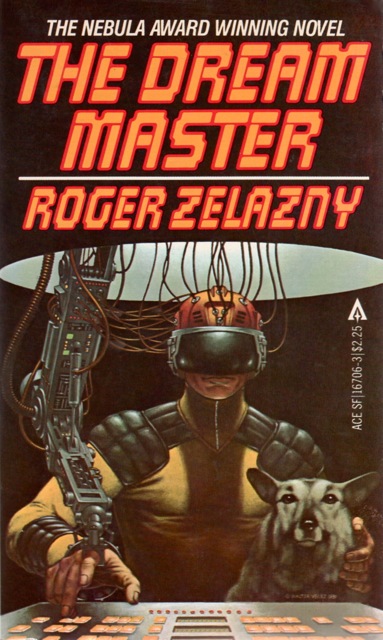