The second in my Kate Wilhelm’s SF Guest Post Series (original announcement and post list) comes via Heloise Larou (twitter) who blogs on a variety of genres and topics over at Heloise Merlin’s Weblog.  She previously contributed an absolutely stupendous review for my Michael Bishop series (here).

Thank you for contributing! 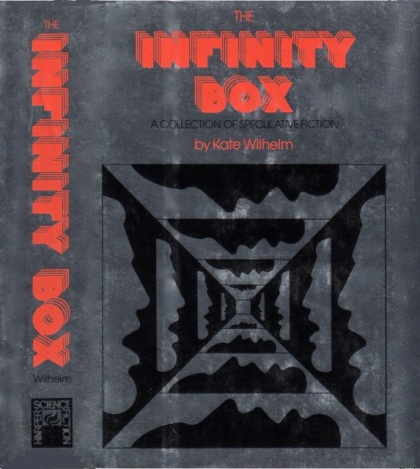 Science Fiction trappings are kept to an absolute minimum in this story collection first released in 1975, and even if the author does make use of some traditional SFnal gadget, she keeps it as unobtrusive as possible, like a time machine coming in the guise of an expensive but otherwise quite normal-seeming watch (in “The Time Piece”). And Kate Wilhelm does not bother with explanations either, not even a minimal hand-waving, some of the stories (most notably, and in spite of the title suggesting differently, “Fusion Bomb”) even might be classified as Fantasy or Horror.

Small wonder then that the stories are classified as “speculative” rather than “science” fiction, because there really isn’t a lot of science here. The speculation comes, I think, in two forms: In the first variant, Kate Wilhelm extrapolates the present into the near future; “Red Canary”, for example, imagines what public health care might look like in a couple of decades and comes to unsurprisingly bleak results. As good as those stories are, I think the second variant is even more interesting: in those, the speculative element derails what used to be an average life, it introduces a What If that insistently scratches and scratches at that normalcy, until it has been has been scraped away completely, showing what lies underneath – and as a rule, what is revealed there is not pretty.

Wilhelm’s view of humanity is consistently bleak: most impressively so in the collection’s title story (actually, more of a novella, length-wise, if not even a short novel), which first establishes its main character and narrator as a normal, even decent guy and then proceeds to mercilessly tear that appearance of goodness apart, showing how it resulted only from the absence of temptation – once given the means to control another human being completely, the narrator (who, of course, is a male) gives in more and more to the desire to wield absolute dominion over his victim (who, of course, is female – this story is also about the role power plays in gender relationships). And Wilhelm leaves no doubt that it is indeed power which is the lure – the narrator does not wish to control his victim for any particular reason, but only because he can, he only becomes physically attracted to her after he finds out that he can control her and even then does not appear to even be enjoying it, . It is not so much that power corrupts the narrator, but that the possibility to exercise power calls forth the irresistible desire to use it.

Summarized like this, the story’s impact might come across as misanthropic rather than political or feminist, and I’m not actually sure that this impression would not be correct. Let humans – an individual or a group – gain the upper hand over other humans, this – and in fact all the stories in the volume – seem to tell us, and they will try their hardest to oppress, violate, or outright destroy anyone they have power over. The only story somewhat less bleak than the others is “April Fool’s Day Forever” and it is perhaps no coincidence that I’d consider the only mediocre contribution among what is otherwise a collection of very good to excellent stories.

To reveal those dark, power-addicted strata of the human mind, Kate Wilhelm has to dig deep into her characters’ psyche, and I think it is in precisely that pysological rigour where the essential strength of these stories lies (and from here, it might become understandable how she went on to write mystery novels, a genre that thrives on psychological exploration). This is noticeable in the writing, too – while descriptions here tend towards the bland and dialogues are often borderline stilted, Kate Wilhelm’s prose really comes into its own where it explores her charcters’ psyche. Whenever she dissects minds, her sentences following the characters’ every intricate thought process, sensitive to even their most nuanced motivations, and her otherwise competent but somewhat lacklustre writing becomes supple, poised and lucid.

One story, however, is somehow the exception to all those rules, and it might even be the best story in this volume – its final one, “A Funeral.” On the one hand, this is the most SFnal of all the stories collected in The Infinity Box: it describes a bizarre, Dystopian future that is ruled by some kind of caste system and tells of a young woman caught up in its system. That is a fairly standard setting, but Kate Wilhelm turns into something truly extraordinary by the way she tells the story – it is narrated in close third person view, we never get to see or know things that the story’s main character does not experience or know, and yet, by way of overheard snippets, allusions and other narrative flotsam the reader is enabled to piece together the story of how this world came to be and what drives it. Maybe it is because Kate Wilhelm is so deeply and entirely inside her character here, but she is writing at her very best, painting a picture that is in equal parts bizarre and bleak, investing the whole story with a chilling atmosphere that seems to settle in the reader’s bones.

Overall, this is an excellent collection, pretty much a must-have for “The Infinity Box” and “A Funeral” alone, but with all stories between those two worth reading.

Where Late the Sweet Birds Sang (1976) via Admiral Ironbombs over at Battered, Tattered, Yellowed, & Creased

Welcome, Chaos (1983) via Megan over at From Couch to Moon

Collection: The Downstairs Room and Other Speculative Fiction (1968)