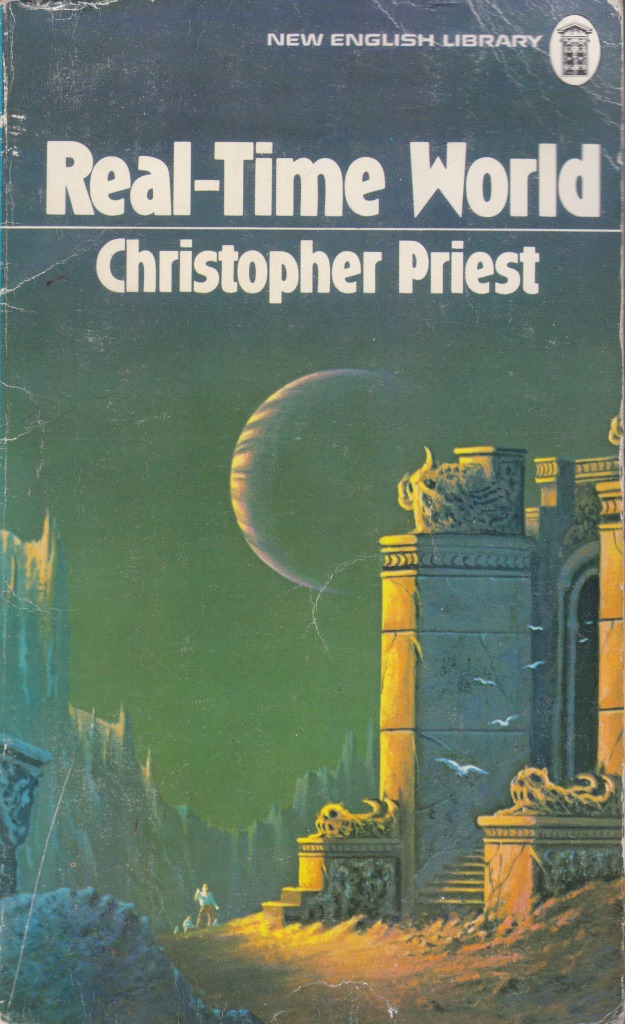 (Bruce Pennington’s cover for the 1976 edition)

Christopher Priest’s An Infinite Summer (1979) clocks in as my second highest rated single-author collection, behind Michael Bishop’s Catacomb Years (1979), so far in the life of my site.  I find Priest’s fiction intense and hypnotic.

As Real-Time World (1974) contains a range of Priest’s earliest published short stories, one cannot escape the feel that he is still trying to find his way as an author.  Similar indecision characterized his first novel Indoctrinaire (1970). The best stories in the collection revolve around the themes—the complex nature of perception and reality, psychologically unsettled environments and characters, voyeurism and performance—that his later works would take to greater heights (for example, The Affirmation (1981) and the various stories within the Dream Archipelago sequence).  Read for “Real-Time World” (1971), “The Head and the Hand” (1972), “Sentence in Binary Code” (1971), and “A Woman Naked” (1974).

The collection’s least satisfying stories, the futuristic space capers “The Perihelion Man” (1969) and “Breeding Ground” (1970), although still exuding some psychological depth, give the impression that Priest is not in his literary comfort zone.

Despite the unevenness, I absolutely recommend the collection for fans of Christopher Priest.  For those new to his short fiction, An Infinite Summer remains the place to start.

Lasken and Elizabeth care for Todd, a performance artist who mutilates his own body for adoring audiences.  Lasken has an affair with Elizabeth, Todd’s wife, who “saw herself in some messianic role” (15).  And they both hatch a plan for Todd’s final performance.

The body horror elements mesh well with Priest’s gorgeous imagery and distancing prose style.  As Todd, limbless and castrated, moves across the stage via complex contraption, “the movement was eerie and unnatural.  He floated on the wire so that his false legs just scraped the canvas of the stage” (19).  Most disturbingly, although horrified by their participation in Todd’s spectacle, Elizabeth and Lasken cannot escape their own roles and Todd knows more than he lets on.  And Todd, “Le maître” (18), still orchestrates all despite his mutilated state.

“Fire Storm” (1970), short story, 3/5 (Average) reminds me of Indoctrinaire (1970), a fascinating premise that never manages to exert the power that it should.  Captain Maast, who considers himself a dying breed of war artist, waits for word from his superiors to erase the city of Anthus.  For Maast, the destruction of cities, amounts to art: “He had grown up in a traditional, conservative background of warfare, where destructing had taken on some of the aspects of an art” (32).  Until the command, he demands the maintenance of all the city’s function: “I want all the street-lamps on, and as many private houses and public buildings lit as you can manage” (26).   Destruction as art.

“Double Consummation” (1970), short story, 4/5 (Good): Almost a reimagining of Wyman Guin’s “Beyond Bedlam” (1951), “Double Consummation” follows the couple Clive Tiptree and Nicola Woodfield who, via drugs, periodically undergo “transition” and take on “distinct” moods in order to carry on relationships with others.  In a future of hyper-abundance, the government uses “sublimages”  to “mould the nation’s moods and fashions” (42).  Other psychological drives are conquered, for example the “social” drive behind “population explosion” (42).  In this depopulated post-scarcity UK, marriage no longer serves a function.  Via a society filled with subliminal images and bifurcated realities, Priest explores the power of relationships, often ephemeral, holding out against the tides of fragmentation.

“A Woman Naked” (1974), short story, 4.5/5 (Very Good): A harrowing fable about the male gaze and the objectification of women.  Told in a detached style “A Woman Naked” tells the story of a woman assigned the “temporary” name “Mistress L—-” after she is caught and charged with “sexual promiscuity” (53).  She most walk from her house to the courthouse, where her testimony must match that of the official narrative told by informers, naked.  Her brother and his friend, who cannot directly intervene, attempt to influence the mood of the male crowd that threatens her as she makes the walk.

A minimalistic story relayed with almost scientific distance, only the sparsest details of the future (or some alternate present?) suggest a terrifying world where women are oppressed, perhaps spurred from a social environment where “men outnumbered women several times over” (57).  Despite its short length this was an emotionally tough read that a lesser author would not have been able to pull off.

“Transplant” (1974), short story, 3.75/5 (Good):  Arthur Knowland spends his days confused by the odd decayed version of the neighborhood he inhabits and depressed at the prior death of his wife.  As one might expect Arthur is not really alive but rather, as his brain survived and machines maintain his body, recreates the memories that are most familiar to him. However he realizes that he can exert some semblance of control over his experiences.

“Breeding Ground” (1970), short story, 2.75/5 (Vaguely Average):  My least favorite story in the collection, “Breeding Ground” tells the tale of Luke Caston, the captain of the spaceship Glory Whore, who discovers the holy grail of space scavengers, the remains of the Merchant Princess: “the entire industry of space-salvage owed its existent to her” (79).  Despite the promise of great wealth, there’s a catch — small space-mites who live in the wrecks mysteriously enter your spacesuit.  The psychological terror of being trapped in a spacesuit unable to doing anything about the mite’s electric shocks, creates intense discomfort among spacemen: “Get a space-mite inside your suit, the old lay of the spaceman went, and before it suffocates it’ll drive you half crazy” (78).

“Sentence in Binary Code” (1971), short story, 4/5 (Good):  As I’ve read so much SF, I often spot twist endings or grand reveals with ease…. Not here.  Joseph Turatsky, branded a political undesirable, emerges from the Institute of Corrective Therapy without a body and inside a computer mainframe.  Along with various other political dissidents in “electronically-stimulated mental contact” (92), he’s tasked with processing information: “for twelve hours of every day, data was fed into his core in binary impulses” (93).  Eventually he discovers a way to escape, but little does he know that by escaping he’ll be working against his initial political inclinations.

“The Perihelion Man” (1969), novelette, 2.5/5 (Bad): A mundane adventure tale about space nuke satellites going missing. A medically discharged astronaut is recalled by a shadowy agency to save the day…  Captain Jason Farrell, addicted to life in space, will do anything to get back.  Little does he know that there are other forces at play. Forgettable.

“The Run” (1966), short story, 3/5 (Average): Priest’s first published SF story (he put together in 2008 a collection of earlier unpublished works), shows promise in its scenario and fraught mental and physical landscape.  Senator Robbins  leaves a military base–in a future wrecked with social and political unrest–and approaches the governmental building.  He encounters a horde of juvies who block the road and he must choose whether or not to drive over them.  A story about individual choices vs. the greater geopolitical and social forces beyond our control.

“Real-Time World” (1971), novelette, 4.5/5 (Very Good) evokes a beaker containing all Christopher Priest’s favorite ideas….  But, without any other context to anchor the realty of the experience, only the beautiful chemical reactions swirls of the story can be grasped.  The narrator, whom we initially equate a scientific exactitude to his observations, comments on the inhabitants of an “observatory” whom he considers insane: “In cold factual language: I’m a sane man in an insane society” (134).  No one seems to know the purpose of the observatory, where it is, or if it is even possible to leave.   The “cold factual language” obfuscates a complete lack of firm knowledge.  He believes that the inhabitants, due to a minute temporal displacement, are able to foretell events of the future.  But, as these current events from the real world are sent to him and only him, they might be entirely fabricated.  The reader is left grasping at any shred of “reality.”

Experimental stories like this one are bound to be frustrating, however Priest’s delivery — the “cold factual language” combined with the slow eroding of the narrator’s control over the situation and his own narrative of his own role the experiment — creates a mesmerizing reading experience.  But then again, I adore both The Affirmation (1981) and Barry N. Malzberg’s Beyond Apollo (1972).

For another view on the story see MPorcius here. 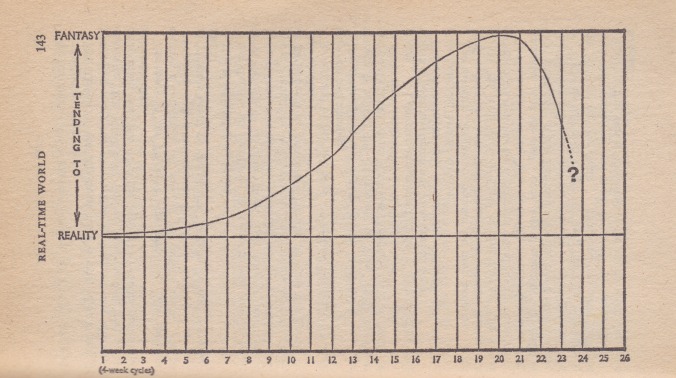