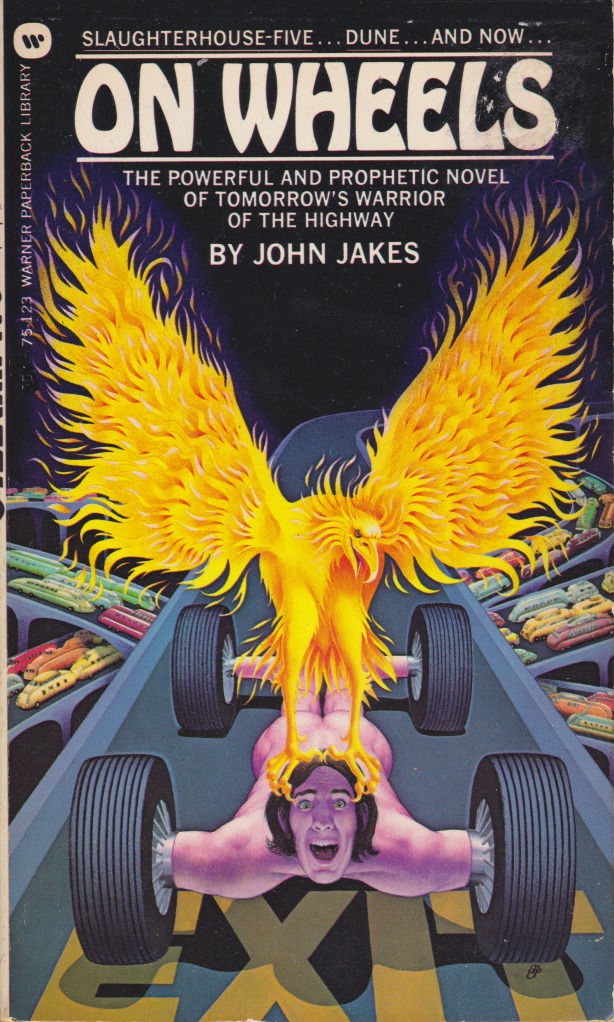 John Jakes’ satirical On Wheels (1973) subverts the popular trope of the freedom of the road. The clans (convoys of linked cars, mobile stores, residential cars, bars, and mechanics) who journey across the massive highways that crisscross the USA never dropping below 40 mph are no more free than the denizens of the crowded mega cities. At first glance the clans exude an aura of rebellion made manifest in their claims of voluntarily social estrangement from the rest of society, hyper-masculine car races and duels over women, and self-justifying theology connecting their existence to some grand American narrative of the past:

“Have we not found space and freedom beneath the singing wheels of our machines? Is there not room for all upon the turnpikes and freeways? Rome for those red-blooded, God-fearing men and women whose forebears, amongst the beloved hills and piney woods, first heard the thunder of superchargers on the roadways of the night?” (42)

Even in death the clan drivers are said to personify FREEDOM: the Firebird, derived from the Pure Oil logo, appears to those who go out in a blaze of glory on the road; and a son of a dead driver, hauled from vehicular wreckage, can be proud that his father was still jamming his leg “up and down as if to operate the accelerator pedal” (38). However, the road is a glorified prison. Supported by dole payments from the US government, the clans are but another cog in an overpopulated state that threatens to implode.

In three parts—humorously labeled “Low Gear,” “Through the Gears,” and “High Gear”—Jakes follows the life of Billy Spoiler, an aimless adolescent who struts around in “Dacro-prest Imitation Denim” (43) and prone to wet dreams “involving himself, the Firebird, and the honey-haired blonde who rode the bird with flames streaming out behind her naked buttocks” (40). Via Billy and his exploits Jakes levels a blunt critique of hyper-masculine road (biker?) culture. Almost a pastiche of the adolescent rebel filled with dangerous sexism and violent tendencies, Billy, smelling of “his own STP Brand All-Man Afta-shave Bracer” (43) lusts after the manipulative Rose Ann, “He didn’t like the woman ways he saw in her green eyes. But the heat inside him pushed that aside” (45). Her boyfriend Lee, of the rival Ramp clan, challenges him to a race for Rose’s hand! With the clans cheering the dangerous spectacle on, Lee Ramp and Billy resort to dirty tactics. Lee barely survives, charred and desperate for revenge.

The novel shifts gears [no pun intended] and the prison walls close in. The realities of married (with the wrong partner) life interrupts the initial sexual passion: “About four weeks after Billy Spoiler and his bride returned from their honeymoon, the quarrels began” (79). As with Billy, Rose Ann is painted in cartoonish—woman as manipulator—strokes: she convinces Billy to buy her an expensive car, ridicules him at every opportunity, and has numerous affairs. All pretensions of a SF novel for teens shatters as uncomfortable scenes of domestic abuse unfold as Billy is unable to control his violent tendencies: “His words grew incoherent as he banged her head a few more times, then pulled her by the hair, dragging her out of the double bunk and threw her on the floor […] Billy hauled off and kicked her ribs” (98).

Billy, the true face behind the mask of road rebel unveiled, can only weakly mumble, “I didn’t mean to bang her up. I just got so mad” (99). As he pathetically attempts to find medical attention for his pregnant wife, he discovers the true walls of his world. [why bystanders who stopped Billy’s attack then allow him to take his injured wife to find medical attention bewilders…]

On Wheels (1973) attempts to dispel the freedom of the road and its mythologies. For Jakes, the road presents freedom imagined by and lived to some degree by the naive young, a freedom only fleetingly glimpsed by the old.  More dangerously, the manifestations of this type of culture explodes in violence and an inability to create stable and loving relationships. It is hard to tell whether or not John Jakes seeks to present Billy, an abusive man, as a tragic product of the system or a stark exposé of the road rebel as hero. Fascinating dystopic world of car convoys aside, On Wheels lacks the necessary craft and articulation to rise above similar visions of the era. A lumpy shillelagh of a novel that cudgels and jabs with quirky intensity that breaks upon impact…. Sort of like Don Ivan Punchatz’s cover for the 1973 edition. 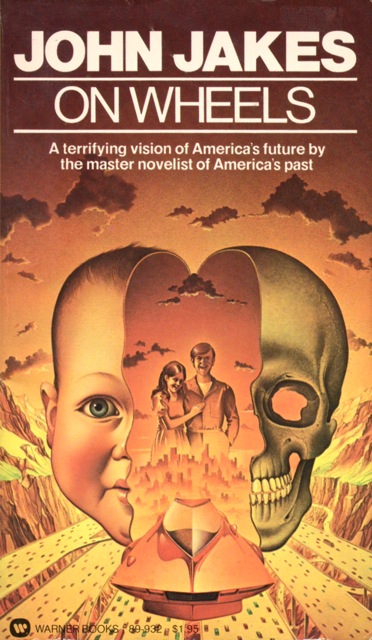 (David Plourde’s cover for the 1978 edition) 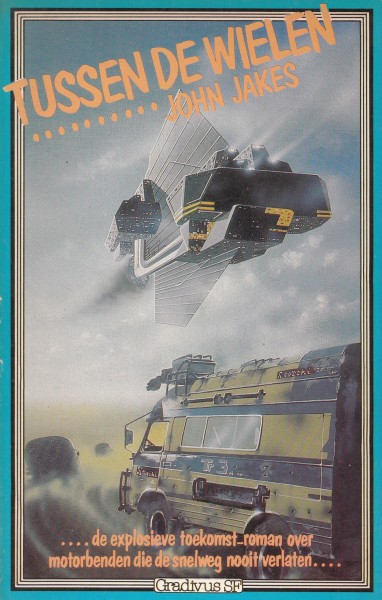 (Uncredited cover for the 1980 Dutch edition)