2) A fascinating speculative feminist novel from The Women’s Press–birth, myth, delusions, dreams, terror.  Few reviews exist online so I will go in without much knowledge of the work.

3) I placed Miriam Allen deFord’s collection (filled with numerous gems) Xenogenesis (1969) on a list of SF Gollancz’s Masterwork series should acquire. Her only other published collection for the longest time was priced far out of my reach. This is why you have Amazon lists… scan them frequently, find the deals!

4) A Ballard novel with “pervading auroral gloom, broken by inward shifts of light”? Count me in! As a fierce advocate of Ballard’s early fiction and novels, I cannot wait to read this one…

Scans are from my personal collection. Click to enlarge.

Thoughts/comments are welcome (as always)!

(Laurence Kresek’s cover for the 1976 edition)

From the back cover: “FLAWED UTOPIA. When Ivan Zhilin, interplanetary engineer, returned after years of space work, he wanted a quiet vacation on some sunny restful spot on Earth. And at first it seemed he had found the place—a charming seaside of a “liberated” country.

But somehow, since his long sojourn in far orbits, things had subtly gone wrong. He got disquieting hints of irrational actions, of secret societies of a destructive nature, of events of mass madness… and a constant reference to a mysterious product available only through the “right connections.”

And when he pursued the enigmas, he found himself projected into THE FINAL CIRCLE OF PARADISE—the ultimate electronic “high.”

It is an unusual and thought-provoking novel by the talented authors of HARD TO BE A GOD. Never before translated, this is truly a DAW international event!”

(Hannah Firmin’s cover for the 1983 edition)

From the back cover: “‘She shivers in the hospital corridor, new admission for induction of labour. Nine o’clock on a Monday morning in January, in the early nineteen-seventies. The age of technology…’

Zelda is a ‘good girl’ who has made a ‘good’ marriage. She is accustomed to please. Yet as her body is divided and her baby wrenched from her, rebellion rises in her; she enters a surreal world where past, present and deeper levels of myth, and childhood fairytales are nightmarishly confused.

The Birth Machine is a disturbing and powerful first novel by a talented new writer who uses language to pleasure and surprise.”

From the inside flap: “ELSEWHERE, ELSEWHEN, ELSEHOW i a definitive collection of fantasy and science fiction stories by one of the all-time greats in the field. Miriam Allen deFord, the doyenne of the San Francisco Bay Area Science Fiction Group (which included the late Anthony Boucher, J. Francis McComas, and Poul and Karen Anderson) introduces us in these stories to the living and to the dead—the dead who no longer have reason to fear the heat of the sun—and the living, here on Terra and on other worlds, who live in the shadows of a fear as old as, if not older than, the human race. These are chilling hints of the possible Tomorrows which we ourselves will perhaps never know, but which those who will come after us will have to live with….

Miriam Allen deFord is well-known as a writer of crime and suspense as well as science fiction stories, biographies, poetry, and novels. Some of her recent books include Real Bonnie and Clyde, Theme Is Murder, Thomas Moore, and Xenogenesis.” 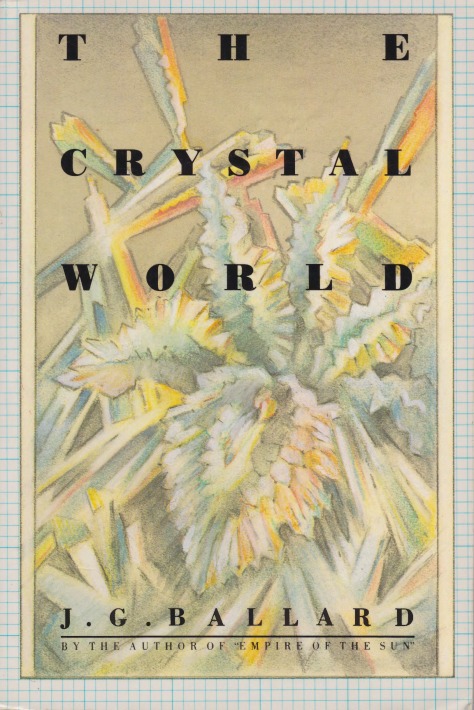 From the back cover: “The forces of nature are pitted against humanity in The Crystal World, J. G. Ballard’s fourth novel. Dr. Edward Sanders, physician specializing in the treatment of leprosy, is invited to Mont Royal by Dr. and Mrs. Clair. Upon arriving at Port Matarre, a small outpost in the interior of Africa, he notices a ‘pervading auroral gloom, broken by inward shifts of light.’ The reluctance of authorities to acknowledge this curious mid-morning darkness arouses Sanders’s suspicion that something has gone wrong. Unable to reach Mont Royal by car—the roadways have been blocked—he takes to the river. His journey brings him to the forest, now strangely drawn toward this glittering world, whose area expands daily, affecting not only the physical environment but also its inhabitants. The purity and the permanence of the forest’s crystal form taunt him, even at the expense of the one unpredictable agent called human life.”