To move past my variegated obsessions regarding William Kotzwinkle’s Doctor Rat (1976) (review + list of imaginary scientific articles), I decided to reread a lesser known John Brunner novel. I cannot pinpoint exactly when I first read Bedlam Plant (1968), other than before I started my site, but it holds up as a moody biological mystery with mythological undertones as colonists confront their deceptive new world.

This isn’t Stand on Zanzibar (1968), Shockwave Rider (1975), The Sheep Look Up (1972), or The Jagged Orbit (1969), but it left me wishing that Brunner applied his immersive near future SF skills to a vast, dark, far future tapestry. Brunner completists and fans of 1960s colonists on strange alien planet SF will not be disappointed—nor will you be blown away.

Far superior to the last John Brunner novel I read!

Dennis Malone is an explorer. He was one of the first four members of the expedition to the planet Asgard—“exposing themselves to the new planet to determine its habitability” (10). The men of the group, Dennis and Pyotr Tang-Lin, returned to Asgard with the colonization mission. Disaster strikes as Pyotr Tang-Lin crashes one of the three spaceships into the alien moon preventing Dennis from returning to Earth with any colonists who might be psychologically unsuitable for life on Asgard.

Dennis Malone is psychologically unsuitable for life on Asgard. Isolated and depressed, he spends his days bemoaning his fate. He is possessed by “the presence of the gashed terrible reproving moon” where Pyotr met his fate (5) wishing that he himself “had died on the alien moon” (12). An explorer at heart, he sinks into a morose state, characterized by Parvarti Chandra (one of the leaders of the colony) as a “martyr complex” (17).  He seeks any release from the tedium of establishing the colony. As the colonists are comprised from the specialists of Earth, Malone’s own area of expertise is unneeded.

When a biological disaster–in the form of a mysterious scurvy caused by an illness that modifies the gut’s bacteria–rampages through the colony, Malone might have a use after all! Tai Men, a Chinese medic and biologist, suggests the only answer to the dilemma might be to ingest plants grown in Asgard’s soil: “but when it came to risking the delicate balance of their very bodies on the assurance of someone whose data they could not fully understand, it was different” (31).

When Dennis sets off across Asgard’s landscape to carry out various banal tasks assigned by the colony’s scientists, he accidentally discovers there might be a way out. But by the time he returns to the colony, madness has already descended. Or has it?

John Brunner expands on the basic biological mystery besets colonists on alien planet in an intelligent (although not entirely successful) manner. Underpinning the lives of the various colonists, is a mythological substructure based on the cultural memory each diverse colonist brings from Earth. Brunner explores mythological memory and mythological action in various ways. Dennis Malone and Sigrid Kallela, one of the first four explorers who live on the planet, engage leave a “symbolic mark” on Asgard by a passionate/violent coupling (38). In addition, Parvarti wants the colony to “develop their own” festivals derived from the ones of Earth to create a new cultural memory (36). A memory derived from that of Earth but suitable for the new society…

The novel concludes with an excerpt from a much later historical text about the colonists suggests that they all played the role of the planet’s first Gods. This is both good and bad for Brunner’s characterizations and plot. At times the narrative–especially as each character undergoes a culturally unique transformation in terms of their mythological knowledge–reads like Brunner placed sections of the Larousse Encyclopedia of Mythology in a blender. Rather than focusing on individual powerful images, the story occasionally reads as an information dump in the form of a New Wave-esque descent into the metaphysical. As each colonist stands in for the accompanying cultural heritage, the diverse cast (Indian, Arab, African-American, Swedish, Chinese, Japanese, Greek, etc.) take on more archetypal (a clichéd) characterizations. Regardless, Brunner should be applauded for the women leaders and scientists, races, and religions represented by the crew, flawed although the representations might be.

Bedlam Planet attempts to break free from the straight-forward humankind settles alien planet template by emphasizing the psychological effects of colonists unable to return to Earth. The novel feels rushed although well-intentioned. If only similar ideas surrounding far future colonization were explored in a more refined and immersive experience à la The Jagged Orbit (1969) or Stand on Zanzibar (1968). 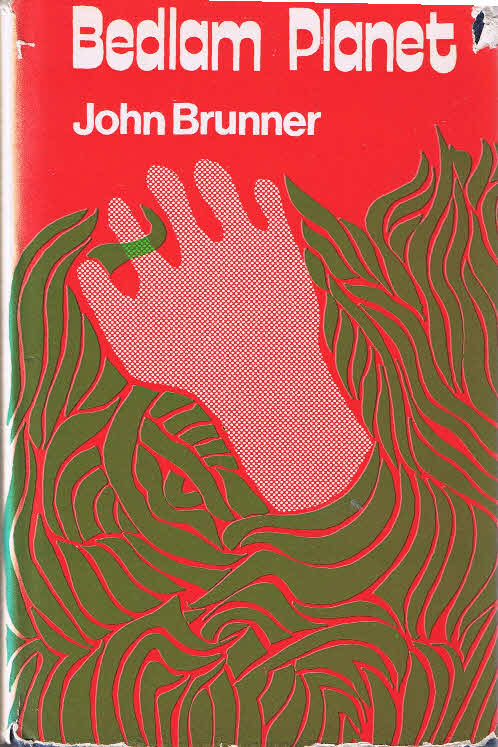 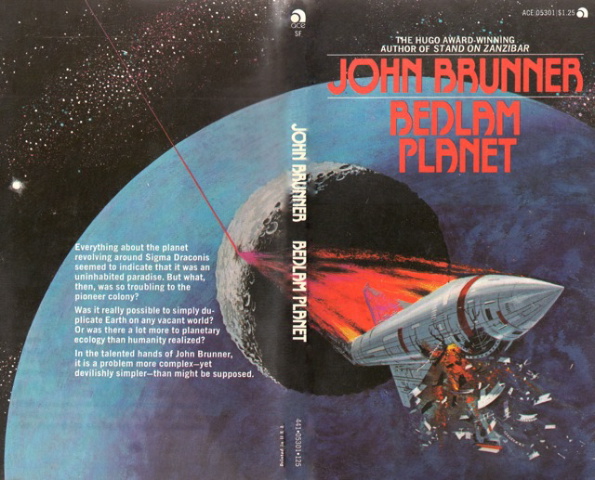 (Uncredited cover for the 1975 edition) 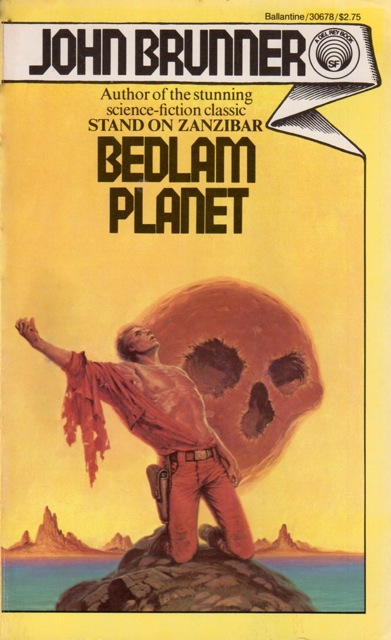