1. A fascinating, and disturbing, themed anthology edited by Thomas M. Disch. Of the stories in the anthology (see contents below), I look forward to Gene Wolfe’s “Three Million Square Miles” (1971) the most.

2. I recently read and enjoyed Garry Kilworth’s The Night of Kadar (1978) so I pulled the trigger and purchased a handful of his other early SF works. I’m also for ambivalent takes on revolutions…. In Solitary (1977) is Kilworth’s first published novel. According to  SF Encyclopedia, the novel “is set on an Earth whose few remaining humans have for over 400 years been dominated by birdlike Aliens, and deals with a human rebellion whose moral impact is ambiguous; the novel is the first of several combining generic adventurousness – indeed opportunism, for Kilworth seldom accords his full attention to the raw sf elements in his tales – and an identifiably English dubiety about the roots of human action. Consequences of such action in a Kilworth novel are seldom simple, rarely flattering, usually ironized.”

Will read this one soon.

3. I know little about M. A. Foster’s SF other than a few articles I’ve read here and there–The Gameplayers of Zan (1977) included. In 2009 Jo Walton wrote a positive article about the novel on tor.com.

4. A completely unknown author (Cary Neeper) and novel (A Place Beyond Man)…. I don’t have a lot to go on for this one!

(Richard Powers’ cover for the edition)

From the inside flap: “The theme of this book is ecological catastrophe—and the uncomfortable truth is that these catastrophes don’t require prophecy, only simple observation. Polluted air, polluted water, burgeoning population, diminishing resources—we see the results of these things in our daily lives. We teeter on the bring of disaster. Here, in the relatively painless form of fiction, is the haunting picture of the fate in store for us. “Mirror, mirror on the wall, what is the worst result of all?”…

With first-class names, beautiful writing, and an urgently relevant theme, this unique anthology must carve a major reputation in the SF field as a notable first.”

(Paul Alexander’s cover for the 1979 edition)

from the back cover: “An alien race of winged conquerors rules the Earth. Humans are kept in rigid isolation from each other, except for controlled mating. Only two dare join forces in an illicit bond of love and revolt:

CAVE, the last Earthman in Brytan, banished from the crystal-walled city to the desolate mudflats of Hess, where each tide drives the solitary exiles to the refuge of transparent needle-towers.

STELLA, the beautiful, determined revolutionary, sword to overthrow Earth’s tyrannical, bird-like oppressors, even as she carried a bold and startling secret.

Together they flee to the exotic South Seas Islands, where they defy their extraterrestrial masters and explore seductive new worlds of passion. Then, from the stars, from which had come their subjugation, falls hope of rescue—and a brutal, unexpected choice…”

(Michael Whelan’s cover for the 1977 edition)

From the back cover: “The ler had been genetically created to be a new race of supermen, and the experiment had not been entirely successful. They were superior to normal humans in certain ways, but all too human in others.

Grudgingly, supiciously, the overpopulated billions of Earth allotted the families of the ler a special reservation—a lost wilderness area where they could live their odd lives, contribute their brilliant talents to humanity’s desperate needs—and yet be under constant surveillance.

For the ler the situation was precarious and their future dubious. And the disappearance of a ler girl outside the serveration, the explosion point had been reached.

THE GAMEPLAYERS OF ZAN is the unforgettable novel of that final confrontation between the two human races. It is a novel of depth and perception, over three years in the writing, that is comparable only to the talent and insight of an Ursula Le Guin or a Frank Herbert.” 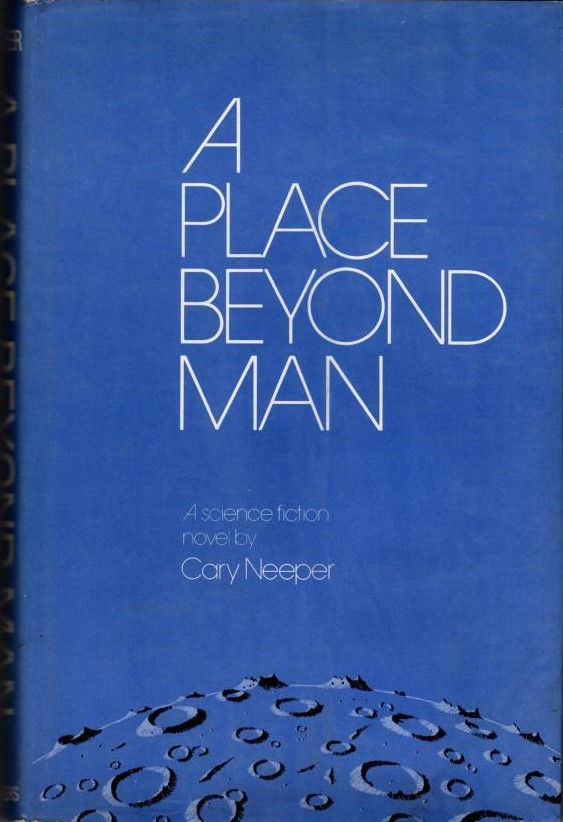 How does the human species react when it meets and intelligence comparable to its own? A PLACE BEYOND MAN is the story of the tangled emotional involvement of one human being with both an elll and a varok—Tandra Grey, the human microbiologists who discovers that she is not as free from human parochialism as she had through; Conn, the joyous ell who brings Tandra to the Elll-Varok moon base to learn whether the three species can physically co-exist; and Oran, the master varok, a somber figure who, like all varoks, can be destroyed by emotion. All three are shaken by the unreasoning resentments and fears—the awe and disgust—that block them from each other.

It is also the story of an earth heedlessly wasting itself in a relentless exhaustion of its own resources—and in the refusal of earth’s human inhabitants to understand they they alone are not the only species with a claim to its well-being.

A Place Beyond Man is a story of inter-species contact against a backdrop of an earth trying unsuccessfully to move to a steady state economy.”