From the inside flap: “The planet Windhaven was settled by humans after the crash of a colony starship. Survivors discovered that people could actually fly on this world, aided by the light gravity and dense atmosphere, and using wings made from a virtually indestructible metal fabric that had once been part of the starship. On this planet of small islands, monster-infected seas and stormy skies, the only means of regular communication between islands is the flyers, a society of men and women who carry messages from island to island, serving those who are land-bound.

Tradition is strong in the flyers’ guild, and tradition has always dictated that new members must be the children of flyers, that wings can be passed only from a flyer to his oldest child. Tradition also dictates that flyers will carry no weapons, and that they will remain politically aloof, detached from the messages they carry.

Maris challenges flyer tradition when she speaks up for herself and her stepbrother, Coll, defending their right to pursue their individual dreams. She proposes that flyers be chosen on the basis of merit, so that only the best fly. Maris wins her battle, but she must face the challenges her victory brings.

Not all flyers are willing to accept those who are not flyer-born, and not all ‘one-wings,’ flyers who win wings in competition, share Maris’ love of the established flyers’ traditions. Led by Val, an intense, brooding man, the one-wings begin to challenge everything that has been sacred to the flyers’ guild and Windhaven’s culture, including political neutrality and the custom of not bearing arms. Maris finds herself battling to preserve the integrity of the flyers and to adjust to the new world she has helped create.”

Initial Thoughts: I have yet to read anything other than a short story or two from Lisa Tuttle or George R. R. Martin. This is an unknown novel to me. I procured Martin’s Songs of Stars and Shadow (1977) and Dying of the Light (1977) recently as well but have yet to read them. In reality, I’m more interested in Tuttle’s output than Martin’s.

Bill Botten’s cover for the 1970 edition

No cover blurb describing the stories.

Initial Thoughts: In the early days of my site Galouye received two reviews: the wonderful Dark Universe (1961) and the average/bad A Scourge of Screamers (1966). I have acquired almost all of his other novels but will explore this collection of short fictions first.

Also, ‘Rub-a-Dub” was an honorable mention for the 1962 Hugo Award for Best Short Fiction.

From the back cover: “Do you remember Tommy Bloome, our beloved Leader who led the revolution that kept America out of World War II and established the worker’s state?

No? Then perhaps you may remember Tommy Bloome, the alienated kid who tried to assassinate our heroic General Norton in 1947?

Well, never mind. You may recall still another Tommy Bloome who… But maybe you had better read this account that Gordon Eklund has put down of the Americas that might have been, of the ambitions of one idealistic young man who tried to make our country and our world “better” and what happens when he bucks the invisible tides that sweep relentlessly through the course of human events.

It may be Eklund’s finest novel–it is certainly science fiction far our of the usual paths.”

Initial Thoughts: I’ve explored a bit of Gordon Eklund’s work in the history of the site: from the solid religious parable “Three Comedians” to his co-written with Gregory Benford Nebula-winning “If The Stars Are Gods” (1974). His dystopic The Eclipse of Dawn (1971) contained promising sequence but failed to deliver. I look forward to reading more of his political SF. 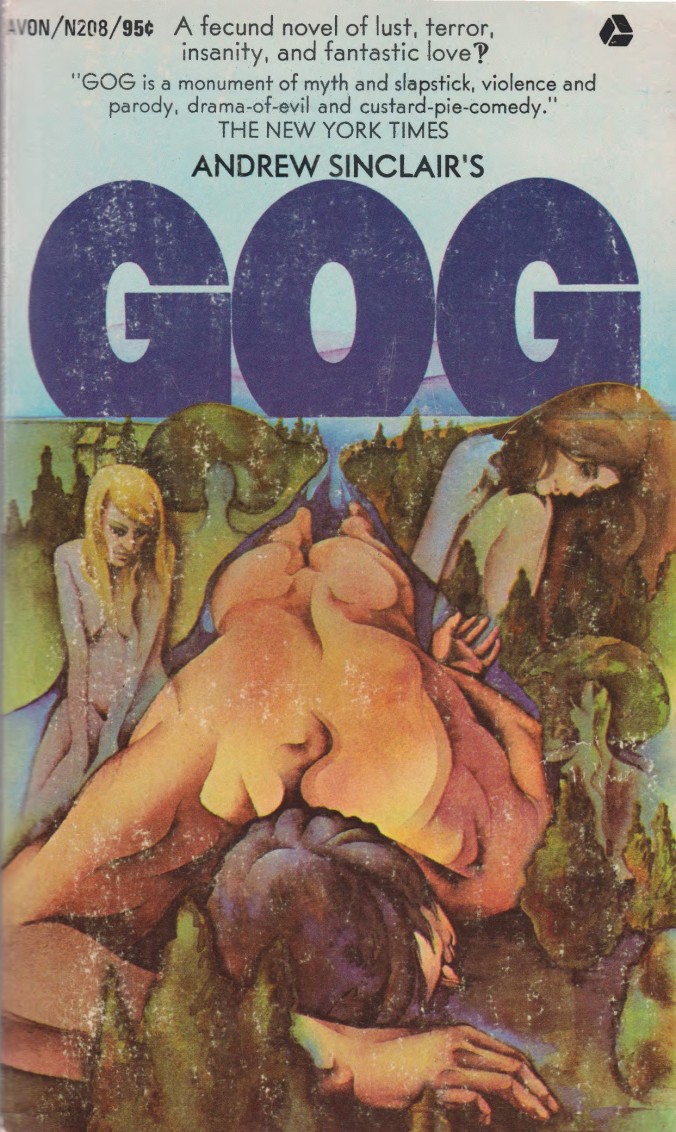 From the back cover: “Oh, once upon a time GOG (they said it was) got up from the seabeach where he lay. He was big all over—seven feet, some said. his hands were tattooed and his mind was gone. This is a book about what happened to him in the wonderful world of tomorrow–or was it yesterday?”

Initial thoughts: As a young medievalist voluntarily sequestered in the University of Texas’ massive Perry-Castañeda Library, cryptic lines from the Chronicon Scotorum for the year 900 A. D., from a tattered 1866 edition, caught my eye and my imagination:

“A great woman was cast up from the sea in Alba: she was nine score and twelve feet in length, sixteen feet between her two breasts, her hair fifteen feet long, six the length of her finger, seven the length of her nose. Every part of her was as white as a swan or the foam of a wave.”

Inspired (and lonely), I wrote an overly complex and labyrinthine short story titled “The Hanged God and his Implausibility Or ‘Jahn Yost’s Deposition and Exposition concerning the Pillaging of a World’” that explored a secretive conventicle of authors who used that annalistic fragment to create a new mythology of a world. I included diagrams, further textual fragments, sketchy metaphorical attempts to convey the seductive allure of invention…

And Andrew Sinclair seems to have done the same thing (in a far more refined way), perhaps inspired by the same historical fragment of a massive unknown human washing up on a beach, forty years earlier!