I’ve only read one of Jack Williamson’s novels co-authored with Frederik Pohl The Reefs of Space (1964) so I thought I’d pick up a solo effort.  I don’t have high hopes but the general plot from the back cover sounds a lot like Star Trek’s Prime directive: “The Men of Earth were on the verge of breaking into space.  The first of their manned moon rockets was on its way to Luna.  Now, after ten thousand years, the celestial Watchers were forced into a decision.  Were the Earth people ready to join the civilizations of space — or should they be turned down and wiped out with solar fire?  The Trial of Terra had begun!”

Harry Harrison — an unknown commodity.  There’re so many good authors out there that I’ve not read.  Alas….  I have many many many many more years. Absolutely atrocious cover…  Dickson’s The Alien Way (1965) was readable and occasionally thought provoking — I have high hopes.

Back cover: “A mysterious explosion has destroyed an Albenareth spaceship and left nine survivors trapped in the confines of a fragile lifeship – eighth humans and their alien commander now face a test far more grueling than the terror they have survived… Hiles Steel, member of Earth’s master race, will lead this strange band of survivors through a power struggle as ruthless as the very forces of nature they must outlive!”

Algis Budrys another classic sci-fi author I haven’t read.  Although not considered his masterpiece, The Falling Torch is supposed to be a solid adventure!

From the back cover: “The Spaceship dropped them into the night.  Their objective: to destroy the mighty empire that held Earth a slave planet.  One was an anonymous agent from Earth’s Underground — the other was the son of the last President of Free Earth, Michael Wireman.  Together they had to weld the underground guerrilla fighters into a force capable of beating the most powerful army in the Galaxy.  Danger and almost certain death awaited them on Earth’s nightside.  But there was the one weapon that could vanquish the Occupiers of Earth, and Michael Wireman had it within him.  The only trouble was, he didn’t know it…” 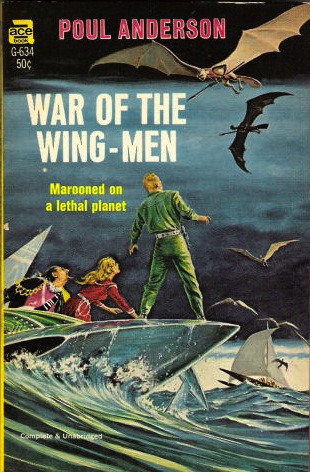 I’ve reviewed nine Poul Anderson works on my blog so far and he remains one of my favorites if I’m in the mood for a solid well-paced adventure.  A few works, for example The People of the Wind (1973) are almost classics.

From the back cover: “When three Terrans — a space pilot, a planetary queen and an obese tycoon — crash-landed on Diomedes, they realized that the chances for survival were quite slim.  The native food was totally poisonous to humans, and the survivors had only six weeks’ worth of supplies to get them across thousands of miles of unmapped territory to the one Terran outpost.  Their only hope was the enlist the aid of the winged inhabitants of Diomedes, and these barbarian tries cared only for battle and glory.  There was little little that could induce them to worry about the lives of three humans….”