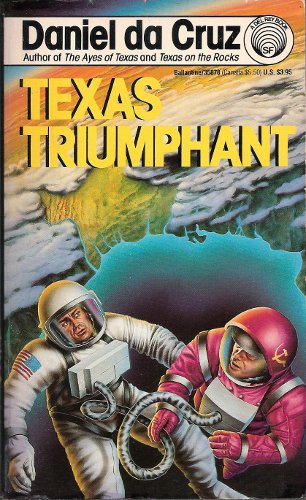 I’m a Texan, well, not really (born/raised for a substantial part of my life in Virginia), but whatever, I’m a Texan.  I’ve worked on a ranch, went to high school with a 600 square mile rural district twenty miles from my house, goats grazed in front of the school, high school football was everything, our band director stole band equipment (the year before I was in band) because all the school money went to said football team… But, I’m now that I think about it I’m not actually a Texan — oh wait, I did go to the University of Texas at Austin.  Well, regardless I don’t own a gun, go tubing drunk down the Guadeloupe River, didn’t (well couldn’t) vote for Bush, never went to a college football game, and don’t barbecue, or ride horses.  But I confess, do like the state and want to go back.

I dare not ask what compelled Daniel da Cruz to write this series — I desperately hope they are satires.

And the art (above):  LOOK, TEXAS DEFEATS THE COMMUNISTS!  THE CLOUDS PART FOR TEXAS!

These are less egregious but equally silly.  Can you imagine being commissioned to make the covers for this series?

Oh, and some evil Texans stealing the president/declaring independence….