I’m the proud new owner of four ace doubles in remarkable condition!  And considering the general quality of many of the Ace doubles, I consider it quite the haul.  The contents: two early pulp works (of rather dubious quality) by John Brunner (one under his pseudonym Keith Woodcott), one early Philip K. Dick novel, two early Samuel Delany novels, and an assortment of works by lesser known authors (Tom Purdom, Jack Sharkey, and Bruce W. Ronald).  I will devour the Philip K. Dick and John Brunner works — yes, Brunner’s early works are terrible but I’m a Brunner completest which requires a high pain threshold for his pre-Stand On Zanzibar (1968) works.

Blurb from inside flap of Captives of the Flame: “THREE AGAINST INFINITY. The Empire of Toromon had finally declared war.  The attacks on its planes had been nothing compared to the final insult – the kidnapping of the Crown Prince.  The enemy must be dealt with, and when they were, Toromon would be able to get back on its economic feet.  But how would the members of this civilization – one of the very few who had survived the great fire – get beyond the deadly radiation barrier, behind which the enemy lay?  And assuming they got beyond the barrier, how would they deal with that enemy – the Lord of the Flames – whose very presence was unknown to the people among whom he lived.”

Blurb from inside flap of The Psionic Menace:  “MUST THE UNIVERSE DIE WITH THEM? The Starfolk, arrogant masters of vast stretches of the cosmos beyond the Earth’s sphere of influence, were determined to complete the extermination of the mind-reading mutants on Regnier’s planet.  But to the mutants themselves, the terror of the Starfolf was nothing compared to the greater dread that gripped their spirits – the obsession that the universe itself was doomed.  This obsession ripped into their minds, overwhelmed them, and plunged them into horrifying hysteria.  The message of doom reached the ears of the Starfolk themselves, forcing them to a fateful decision.  They would allow an Earthman, archeologist Philip Gascon, to visit Regnier in an attempt to unravel its secrets.  What he found would either contain the key to the ultimate destiny of the universe – or the date of doomsday.”

Blurb from inside flap of Our Man in Space: “THIS FUTURE JAMES BOND WAS AN INTERSTELLAR MISSILE.  Bill Brown was a second-rate actor who happened to look enough like a dead spy from the planet Troll to qualify as one-fourth of Earth’s Interplanetary Secret Service.  His assignment was simply to impersonate Harry Gordon, the dead agent, plant false information as to the length of time it would take Earth to die of population suffocation, and return to Earth 10,000 credits richer.  It was only when Brown-Gordon got to Troll that he realized things were somewhat more complex.  It turned out that Brown had been sold out by his government; that Earth didn’t give a hott about the life of its new amateur spy… and there was a little bom inside Bill Brown’s head that Earth was 80% sure would go off!”

Blurb from inside flap of Ultimatum in 2050 A. D.: “PACKAGED PEOPLE IN A WORLD GONE BESERK.  It was the year 2050 A.D. and the Hive, with its ten million inhabitants, was going along as smoothly as ever.  Except that, on a whim, Kinsman Lloyd Bodger, Jr. had helped a fugitive girl escape hospitalization, and she had told him her secret.  “There are no hospitals!  There is only death!  Of course it couldn’t be true.  Lloyd Bodger’s own father was second in command of the Hive, the first true democracy.  “By Why,” she had said, “doesn’t anyone ever return from hospitalization?  Why is the population always a constant ten million?”  Well, young Bodger reasoned grimly, he would soon know the truth.  For hiding the fugitive girl, he himself would either be hospitalized, or fed into the incinerator chutes!” 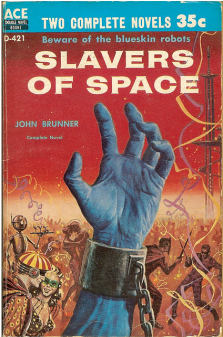 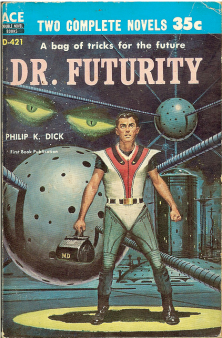 Blurb from inside flap of Slavers of Space: “CONSPIRACY IN STAR FLESH. There were robots and there were androids.  A man of quality and wealth like Derry Horn could have either for purchasing.  The robots were fine, if you liked a machine that could talk and do your bidding exactly.  But in some ways androids were even better.  Those blue-skinned creations, boiled out of some far planet’s chemical vats, were very realistic.  They did what they were told, conversed intelligently, and might almsot be mistaken for people.  But not quite.  For when Derry Horn finally made that mistake one frightful carnival night, it was to involve him in a one-way galactic transit to a rendezvous with utter horror.”

Blurb from inside flap of Dr. Futurity: “A STITCH IN TIME SAVES…? He had a moment of shattering, blinding terror… Where was he? Why was he here? Had somebody brought him here, dumped him off at this spot for a reason?  Suddenly Dr. Jim Parsons realized that he had not been dumped on a new world – but into a new time.  In seconds he had traversed centuries… but why?  How could he escape the time he was in?  How could he avoid the terrible role that the Wolves of the future had chosen him to execute?  There was no way out, for even death was humbled before the inexorable web of destiny.”

Blurb from inside flap Empire Star: “ON THE INFINITY ROUTE.  Comet Jo had a body that was brown and slim and looked like a cat’s, and on his left hand were sharp brass claws with which he had already killed three wild keppards and a boy his own age.  He also had a propensity for wandering, and this was to lead him on an adventure spanning uncounted light-years of space and incalculable spans of time, to free a race of beings upon whom the civilization of the stars depended. Along the way he would meet: the strange multiplex consciousness called Jewel; the beautiful, soul-burdened space traveler San Severina; a creature known as the Lump, who was half-alien, half-machine; Ni Ty Lee, the suicidal poet of the stars, who lived everyone’s life but his own; a young princess of the Galactic Empire, fresh from Miss Perrypicker’s Finishing Academy for Young Ladies… And finally he would meet-himself.  A thousand times, perhaps more.”

Blurb from inside flap The Tree Lord of Imeten: “Delta Pavonis II… far from the sphere of Earth-colonized worlds where a tiny human colony kept a miserable toehold alone on a high plateau of that unexplored planet.  Delta Pavonis II… where two people, Harold and Joanne, were driven from the colony, unarmed, into the terrors of the unknown jungle.  Delta Pavonis II… where two intelligent races fought a bitter no-holds-barred battle in which the human intruders proved to be the decisive factor that would through the world to one species or the other!”