What a group of novels!  Four novels by the highly underrated and underread 1960s/early 70s author Daniel F. Galouye — the only novel of his I’m missing is The Infinite Man (1973)…  I’ve previously read his most famous work Dark Universe (1961) — here’s my review (be warned, one of my first reviews on the site, I’d like to think that I’ve improved) — but copies tend to go for around $10+ online so I didn’t own a copy until I stumbled on a great lot of his novels on ebay for a few bucks…

Just read the back covers quotes (below).  They all sound disturbing and absolutely fantastic.  Rainer Werner Fassbinder — yes, you read that correctly — even made a German language miniseries adaptation, Welt Am Draht (1973) (World on a Wire), of Simulacron-3 (1964). Criterion just released a DVD….  And of course, Josef Rusnak’s more famous film The Thirteenth Floor (1999) was a lose adaptation of the same novel.

Also, I spent the most I’ve ever spend on a paperback for David R. Bunch’s near masterpiece, Moderan (1971).  I finished the novel last week (interlibrary loan) and had to find a copy…  They are usually $18 + online but again, found a copy on ebay and made an offer.  I’ll have a review of Moderan up in a few days, I promise! 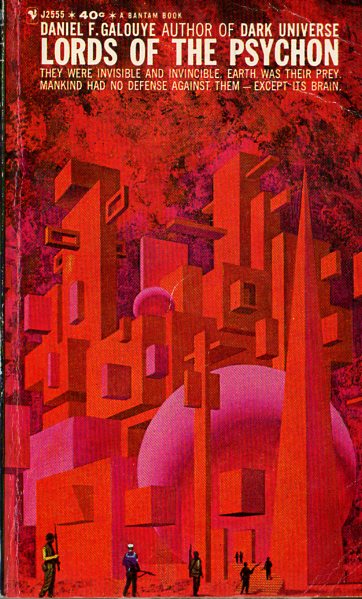 (Uncredited cover for the 1963 edition)

From the back cover: “City of Force: huge prisms, obelisks, cubes, cylinders, rhombohedrons, domes, pyramids shimmered with glowing colors, corruscating [sic — haha, spelling mistakes on book cover always make me laugh] essence, blinding radiance…  Here were the Lord of the Psychon!  And Horror Day was fast approaching, the dreadful day when Earth was held inescapably in a grid of luminescent, evil energy, the day when the Earth might be torn into another universe!  A little band of ragged men, the pitiful remnant of the Army and Navy of the United States was all that stood between this unimaginable fate and the Lords of the Psychon.”

From the back cover: “Come to Moderan… Moderan is one of the most startling original, provocative, and fascinating future worlds in all of science fiction.  In Moderan, men are made mostly of metal.  They retain strips of flesh to contain their humanity.  They live in Strongholds, and they prowl the war rooms of their Strongholds and plan wars.  Quite a world, Moderan.  Come visit.  The war is about to begin.”

(Uncredited cover for the 1961 edition)

No real summary of the plot on inside flap or back cover — see my review [here].

From the back cover: “The screamie package.  A searing blast of pain and fear which drives its victims into writhing paroxysms of anguish… A raging plague for which the only cure is death!  They tried everything: isolations institutes; screamer pickup squads stalking the streets; emergency sedation kits whose plunging hypodermic needles set off pitifully wailing sirens that could be heard for blocks.  But the epidemic continued to grow….  A scourge of screamers.

(Uncredited cover for the 1964 edition)

From the back cover: “The word of the future built its policies on public-opinion samplings!  But Rien Reactions, Inc. — realized that old-fashioned public-opinion polls were too slow, inaccurate, and unstable on which to base a conforming society.  So scientific researchers Morton Lynch, Hannon Fuller, and Douglas Hall built a total environment simulator — SIMULACRON-3 — into which they fed subjective analogs and got human reaction results… But Lynch disappeared, Fuller was murdered, and Hall was charged with both crimes!  Then Hall discovered that his world was nothing but a total environment simulator for a governing world as large as his was to his own miniature simulator world — and that he was marked for extinction!”