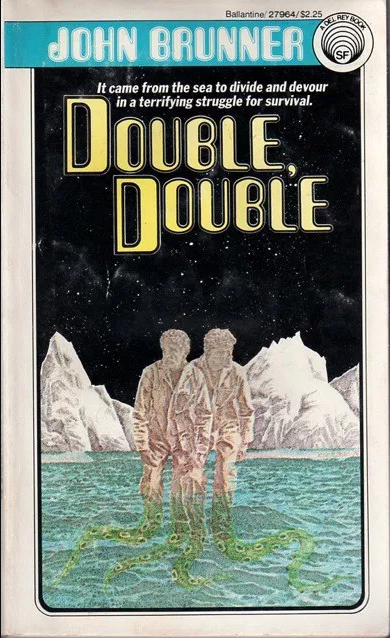 (Murray Tinkleman’s cover for the 1979 edition)

John Brunner has long been one of my favorite SF authors and it almost pains me to review dismal disasters like Double, Double (1969).  I find it mind-boggling that an author who produced the otherworldly Stand on Zanzibar (1968) can turn around and release Double, Double the very next year.  Yes, yes I know, even brilliant SF authors such as Robert Silverberg churned out a vast and bizarre variety of sex/smut books to make ends meet (and buy a mansion) under such names as L.T. Woodward MD (Virgin Wives, Sex in our Schools, etc) and Don Elliot (Cousin Lover, Gang Girl, Gay Girl, The Instructor, etc) so I really should not complain….

Double, Double contains the most rudimentary clichéd premise and a plot used in countless 50s B-movies.  At moments it feels like Brunner wanted to transform the plot into a vehicle for social commentary.  However, at these crucial junctures where Brunner could have used his profusion of strange disparate characters gathered together in the English countryside to comment on the state of English society, he reverts to following the plot dots.  In Stand on Zanzibar the sheer range and number of characters, side stories, quotations, and even charts served to facilitate world-building/narrative/character.  In Double, Double short chapters from the perspectives of the band members of Bruno and the Hermetic Tradition, Dr. Tom Reedwall and his fellow scientist wife, vicious journalist Joseph Leigh-Warden, crazed Miss Felicia Beeding, among numerous others serve to flesh out a “novel” with as little effort as possible.

It’s worth quoting from Spider Robinson’s review of the novel, “it’s a shame that writers have to do this stuff to stay alive” (Galaxy Bookshelf, 1977).  Only recommended for Brunner completists/collectors….  And even they will be disappointed.

Coming toward you it looked as through a piano with hydrophobia had suddenly run wild and opened bulbous eyes like a frog’s but with enormous thick — somehow sad — lashes.  The white and black keyboard of fangs was painted on the radiator grille, and lashes surrounded the headlights.  Splaying out along the sides were art Nouveau curlicues forming frames the size and shape of double crown posters—green, orange, brown purple.  The poster-sized frames were filled with posters, gaudier and more complex than the designs swirling around them.  All of them said, somewhere among their fat bulges and curves:  BRUNO AND THE HERMETIC TRADITION” (7)

Bruno and the Hermetic Tradition has to be one of the best invented band names (an homage to Giordano Bruno and his obsession with the invented figure of Hermes Trismegistus, from where we get the term “hermetically” sealed).  And unfortunately, Bruno and his band friends—an interracial 60s group comprised of Brits and Americans—populate one of John Brunner’s worst novels.

The plot concerns a strange collection of individuals who converge on a rural seaside town.  The town contains ca mysterious chemical plant replete with large vats, a Ministry of Agriculture and Fisheries research facility, and a burnt house lived in by a nutty old woman named Miss Beeding.  A series of usual events transpire in the town which which no one really understands.  Previously, a small plane crashed into the ocean.  After Bruno arrives with his bandmates and “girlfriends” to scout out a chalk cliff for a concert and they encounter a “man” with a deformed face stumble out of the ocean who appears to be the same guy from the plane: “he didn’t seem to want to be helped out of the water, though he was wringing wet and very cold.  Then when we saw his face we—we panicked (71).”  When they report the issue everyone things that Bruno was simply stoned.  And there are weird fish, and doubles, and tentacles, and more dead people who seem to be alive who act, well, like something else.

I suspect the novel would have been rather more satisfying if the social commentary elements of small town life was brought to the fore.  However, besides the town’s initial distrust of Bruno and his band their account of the events on the beach are almost immediately dispelled.  And the novel devolves into a formulaic and uninspired connect-the-plot-dots and reveal slowly nature of the mysterious force, and its peculiar biology, behind the strange occurrences…

(Oliviero Berni’s cover for the 1981 edition)