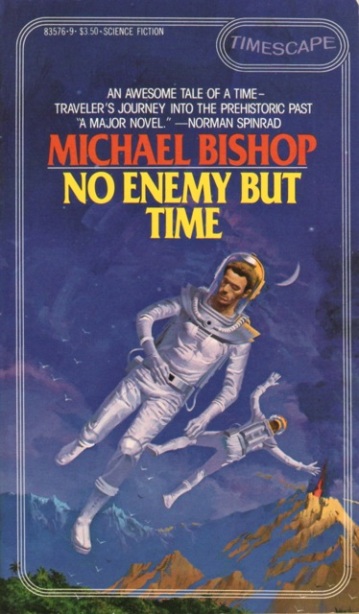 The third installment of my Guest Post Series on Michael Bishop’s SF was written by Megan (twitter: @couchtomoon) over at the relatively new but completely worthwhile SF review site From Couch to the Moon.  She’s already put together a substantial list of delightful reviews.  Megan selected Bishop’s single most famous and Nebula award-winning novel, No Enemy But Time (1982)—and sadly, one of few books of his still in print.  Along with Transfigurations (1979), it was republished and selected for the Gollancz Masterwork [list].

Coming out of Bishop’s 1982 Nebula award winning novel, No Enemy But Time, is like coming out of a time travel trance: the experience is jarring, hazy, and unwelcome. Bishop sweeps the reader into his world—humanity’s distant past—and paints a primitive African landscape dappled with hippos, hyenas, and volcanoes, but lush with the human experience. It’s a world where our ancestors, two million years removed, wear more flesh and charisma than our contemporaries. The reader befriends these charming hominids, shares in their struggles and triumphs, exalts in their communal efforts, only to be yanked back to the present where individuals misinterpret, neglect, and manipulate one another.

(Uncredited cover for the 1983 Sphere edition)

Since infancy, Johnny Monegal has dreamed about the prehistoric past, a phenomenon he calls “spirit-traveling.” His dreams always lead him to the same time and place, Pleistocene era Africa, inspiring his curiosity about primitive humanity and influencing his informal expertise in paleoanthropology. But Johnny knows more about humanity’s past than he does his own, a black baby abandoned by a mute Spanish prostitute, and he later deserts his adoptive family, changes his name to Joshua Kampa, and flutters around Florida until a chance meeting with eminent paleoanthropologist Alistair Patrick Blair. Blair, and temporal physicist Woodrow Kaprow (Bishop has a thing for rhyming names), bring him to the African country of Zarakal, where he will test the technology that will unlock the past and allow his body to join him on his spirit travels.

Bishop’s love for the past is reflected in the romance between Joshua and Helen, a Homo habilis female who Joshua meets during his visit to the past. Helen is the member of a small troupe of habilines who grudgingly adopt Joshua as their resident outcast. Helen, a barren female of unusual height and with humanlike characteristics, shares Joshua’s outsider role, and they eventually mate and bond. Some readers may be disgusted by this pairing, and Bishop acknowledges this when Joshua states, “an old country boy like our Wyoming landlord Pete Grier would have seen more poetry in a farm boy’s hasty violation of an indifferent heifer than in my adult attraction to the willing Helen Habiline” (Loc. 2119, Ch. 16). But Helen, despite her hairy façade, is not an ape, and her advanced sapience and outsider status bridge the two million year gap. Helen and her habiline community represent the “innocent and beautiful” referenced in the Yeats poem from which the title is derived. (“The innocent and the beautiful/Have no enemy but time…” L. 3122, Ch. 22.)

As expected, common SF themes of violence and gender are explored in this novel about pre-human civilization. Typically maligned gender roles take on an innocent quality in the habilines’ primitive hunter-gatherer society, and Helen’s role, having no children to care for (although she yearns for this) and larger stature than most of the men, is stretched to benefit the hunt. But Bishop reminds us that the social boundaries we currently struggle to break were being formed in this early age, where “a big, strong, swift-footed, and cunning female was still a female” (Loc. 1586, Ch. 12) and “if you put on a child in this society, you were automatically dressed as a woman” (Loc. 4557, Ch. 28). And the violence, in which baby cheetahs and adopted Australopithecus children are clubbed to death, may be as dark and bloody as many modern movies and video games, but is never as gratuitous.

But Bishop’s charm lies in his writing. Cool, placid, and precise, with a few snatches of dry humor that surprised a few laughs out of me. Images of habiline shaving cream fights and while the leader wears Fruit of the Looms (which gives new meaning to the phrases “wearing the pants” and “brief dethronement”) are funny, but the real humor lies within Bishop’s observations—never a punchline exactly, but built into the prose, and too corny or unwieldy to take out of context as a quote. This style fits well with the often jokey protagonist, who alternates first-person POV in the Stone Age with third-person POV in Joshua’s modern past. Joshua himself is an odd duck, an outsider in both the past and present, but with more empathy for his habiline companions. He wants to fit in with the “Minids,” whereas he makes little effort to fit in with modern-day Homo sapiens. His peculiar interactions with modern humans only emphasize his outsider status. In fact, I suspect his success with the “Minids” may be due to their limited language skills, which spares them from Joshua’s often inane babble.

Bishop’s wry humor goes beyond the silly imagery and quips that pepper his tale. He pranks his readers by setting up a traditional time travel paradox that, to my relief, he never delivers. He even withholds his anti-paradox time travel rules until the very end, just for the sake of the prank. Habilines with fire, Fruit of the Looms, and a few English words– not to mention sex with a Homo sapien– all have the potential to rock the foundation of human development at its core. And when the time traveler resembles his hominid community (short, dark, and initially speechless), with mysterious parental origins and vivid dreams (perhaps memories?) of humanity’s origins—even a casual SF reader can foresee the looming grandfather paradox. But when Helen births an albino female, and not a baby Joshua, the paradox is revealed as an illusion. And Bishop’s prank serves the rest of the story by fostering that illusion, casting doubt to Joshua’s entire story. 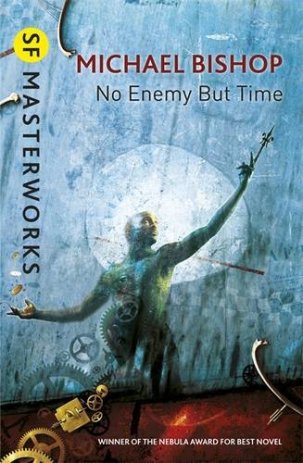 (Uncredited cover for the 2013 edition)

And that’s where the story should have ended. The illusion of time travel told by an unreliable protagonist fits well with the lingering tone of the story, but perhaps Bishop wanted to circumvent the hackneyed “it was all a dream” ending. Instead, Bishop switches gears and flips his resonating sociological study of human origins into a 007 thriller piece in which Josh’s halfbreed daughter catches the attentions of a slimy questionable crook with interests in future-travel. The last tenth of the novel is so out of character, I prefer to think that some idiot editor forced Bishop to axe his original ending (likely brilliant and moving) to wedge in this abrupt shift in tone, in order to dangle the possibility of a sequel. It’s just that terrible.

Or maybe it’s brilliant. Maybe Bishop designed his story to illustrate his interpretation of the chain of human evolution: slow and steady, difficult and harsh, but meaningful and communal, with the last tenth of our history rampaging toward the future in hollow, violent meaninglessness. Perhaps Bishop’s story structure is a reflection of his story’s message, in which he proclaims the end of evolution, likening our current social development to that of a tumor, a mutation rather than progress.

Because that last chapter was like a tumor in an otherwise perfect tale. It shocks the reader out of the powerful trance that Bishop fosters. It’s an unwelcome jolt from the cozy, warm slumber of spirit-travelling, and I was pissed when it happened. I want to go back.

Bishop succeeds where few speculative writers dare to tread. It’s common to imagine a future with endless possibilities, or to inject a documented past with dystopic tones. But to summon an unwritten past, and to gild our primitive ancestors with utopic optimism—it may not be very scientific, but it’s compelling and weighty. Bishop’s habilines hold a mirror to our supposed progress, causing the reader to reexamine their definition of “the good old days.”

Brighten to Incandescence (2003) (review by MPorcius at MPorcius Fiction Log)

Links to my three previously posted reviews of Bishop’s work