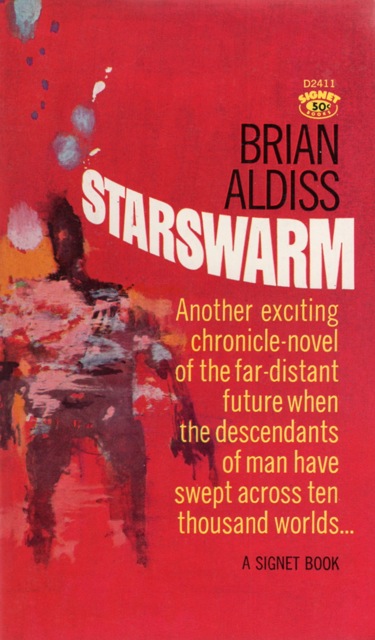 (William Hofmann’s cover for the 1964 edition)

Filth.  Decay.  Mud.  Transmutation.  Brian W. Aldiss’ SF is filled with such images:  Men—with limbs removed—who are slowly (and artificially) transmuted into fish, writhe around in the mud of their tanks grasping at the last shards of their humanity;  A powerful matriarch lords over a planet where her pets transform at will;  A tall tale about a planet filled with strange life and a human hero who cannot get over the fact that everything smells like garbage…. Aldiss’ novel The Dark Light-Years (1964), despite its poor delivery, is the best example of these themes—humans encounter sentient aliens who spend their days copulating, laying around, and eating in their own fifth.  And they are happy with their lot.

Starswarm (1964) is comprised of three novelettes and five short stories with conjoining explanatory material that links the previously published short fiction into a cohesive collection.  The modus operandi of such a conjoining concerns the “Theory of Multigrade Superannuation” where “the universe is similar to the cosmic clock; the civilizations of man are not mere cogs but infinitely smaller clocks, ticking in their own right” (7).  Thus, the inhabited solar systems of Starswarm—our galaxy—will exhibit all the characteristics through which a civilization can pass” (7).  Each story with its wildly different setting concerns one particular segment of the vast galaxy inhabited by man.  As with many of Aldiss’ other collections, the organizational paradigm is evocative although the stories do not always fit nicely within it.

Unlike Galaxies Like Grains of Sand (1960) where the grafted stories fell flat despite the appealing set-up, the stories within Starswarm are vintage Aldiss. Recommended for all fans of inventive 50s/60s SF.  And Aldiss aficionados who do not own this one must procure a copy!

Note: stories marked with an (*) indicate that I reviewed them in earlier Aldiss collections.  If I disagreed with my rating I changed it.  I have also modified the earlier reviews for this review.

Sector Vermillion: *”A Kind of Artistry” (1962) novelette, 4/5 (Good): Derek Flamifew Ende is one of the few people left on Earth.  Humanity has spread across the galaxy over the millennia of spaceflight and physically transformed in a vast variety of ways.  Most human inhabitants of the Starswarm have evolved unique characteristics–fur, other limbs.  Derek is summoned away from his mother (and lover) My Lady.  She spends her day in her laboratory creating animals that can transmute into new shapes.  Derek is to investigate The Cliff.  The Cliff is a semi-sentient asteroid that impacted itself on a planet where it destroys approaching vessels.  Another unusual rumination on the nature of sentience and far future human development.  As a story, more thought provoking than satisfying….

Sector Gray: “Hearts and Engines” (variant title: “Soldiers Running”) (1960), short story, 3.5/5 (Good):  Aldiss explores the power of induced dreams to convince even injured soldiers to be better soldiers: “In his dream he had promoted himself to colonel.  It could be mere oneiric self-aggrandizement: but more likely it was something deeper than that, another slice of prediction matching the first” (38).  Dreams as conditioning would be used to more disturbing effect in Suzy McKee Charnas’ Walk to the End of the World (1974), but the fact that Sgt. Taylor’s is recovering from an injury in a hospital bed and undergoing additional self-brainwashing to prepare his mind for another fight is evocative and disturbing.  Taylor’s fantasies of a normal life are destroyed by the mechanisms of war.

Sector Violet: “The Underprivileged” (1963) shortstory, 4/5 (Good): The Starswarm, the planets inhabited by humankind, sprawls relentlessly across the vastness of the galaxy.  In some horrific manifestation of colonialism the new worlds slated for colonization need to be prepared.  Often that means removing native populations: “The first party to disembark will the immigrants from Istinogurzibeshilaha” (40).  At first glance the arrival planet of Dansson seems luxurious.  The  story follows two natives who soon realize that they have made a horrible mistake allowing themselves to be transported off planet—at least their is an enclave of their kind on Dansson.  But it is a cage.  And there are drugs… And the nice man who followed them around is an undercover immigration office.

Sector Diamond: “The Game of God” (variant title: “Segregation) (1958), novelette, 4.5/5 (Very Good):  I found “The Game of God” one of the more complex short stories in the collection.  An old explorer, a hero among the new Planetary Ecological Survey cadets, resides for years on a planet inhabited by lizard-headed pygmies.  Each day the pygmies bring the explorer a bowl of intestines derived from small fluffy animals that they fight incessantly over.  The old explorer is caught up in a grand delusion of his lordship over the planet and comforts himself with memories of his role in propaganda films recounting his life on the planet.  A new team arrives seeking to solve the biological mysteries of the planet in order to decide whether it is suitable for colonization.  As the mystery of the pygmies and their rituals unravel so do the characters’ fantasies and delusions of control.

Sector Green: “Shards” (1962) shortstory, 5/5 (Masterpiece):  One of the best stories in the collection will remain embedded in your memory.  “The way of telling time in Mudland was ingenious” (88)—Mudland is the bottom of a large tank where humans, whose limbs are periodically amputated, grasp what remains of their humanity.  The process: transformation into fish-like bodies with human minds.  The goal: exterminate the fish-like aliens that are hiding out in the depths on a new planet ripe for colonization.  The transformations that occur appear natural to the pseudo-men: “Fins had been uppermost in his mind for some time.  Fins, indeed, induced in him a whole watery way of thinking” (93).   The offhanded brutality of the situation, the physical filth of their existence, the mutation of their bodies, the horror of the goal creates a concoction bristling with unforgettable horror.

Sector Yellow: “Legends of Smith’s Burst” (1959) novelette, 3/5 (Average):  Even the weakest story in the collection still has merits—a testament to Aldiss’ abilities.  At first glance “Legends of Smith’s Burst” is a galactic romance replete with fantastic aliens and a beautiful love interest.  Hero on planet seeks a way off and must trek across the unusual landscape… However Aldiss explicitly positions the story as a tall tale, the details of which have been exaggerated and modified since the historical events occurred.  Also, Aldiss’ common themes—filth, decay, transmutation—create a landscape and feel very distinct from anything that Jack Vance wrote.  The human hero cannot help but notice the stench of the world, the piles of garbage, the slimy food he has to eat.  None of the planets inhabitants, odd bird men to a race where no two are born alike, seem to have a sense of smell.  For Aldiss, filth is a way to generate the alien and position man in opposition to the Other.

Sector Azure: “O Moon of My Delight” (variant title: “O Moon of My Delight!”) (1961) novelette, 3.5/5 (Good):  Aldiss takes the hard science problem, how to decelerate a FTL spaceship, and creates a human drama of how it would impact society: In this case the inhabitants of Tandy Two and the surrounding Flange, “a huge shock absorber, three stories deep, girdling the planet” (144).  The deceleration of a FTL spaceship literally moves Tandy Two, shifting it from night to day.  The uniform surface of the planet is used for a giant sheep station where farmers live, work, and family drama transpires.  Strange obsessions play themselves out.

The Rift: *“Old Hundredth” (1960) short story, 5/5 (Masterpiece): A masterpiece!  Humankind has vanished completely from Earth — at least, physically.  They have “transubstantiated” themselves into some other states of existence.  The transubstantiation shrines remain, litered across the landscape.  Some humans transformed themselves into music—musicolumns punctuate the wild expanses, which when a living creature approaches creates ethereal music.  Dandi Lashadusa, a massive sentient sloth with modified hands (humans created sentiences in other species), desires to transubstantiate herself into a piece of music in imitation of her creators.  She is tethered telepathically to her Mentor, a sentient dolphin that resides in an underwater monastery.  He is perplexed by her desire….  He sends her mental images of sentient tunneling moles…  And fragments of dead languages… An emotional fabulist tale that plays out in a vibrant post-human earth littered with mankind’s creations and memorials to their transubstantiation. 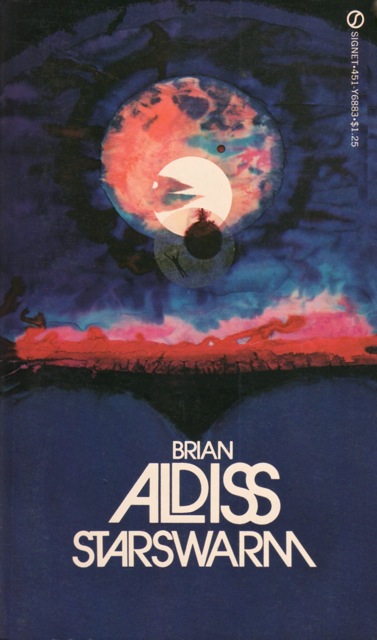 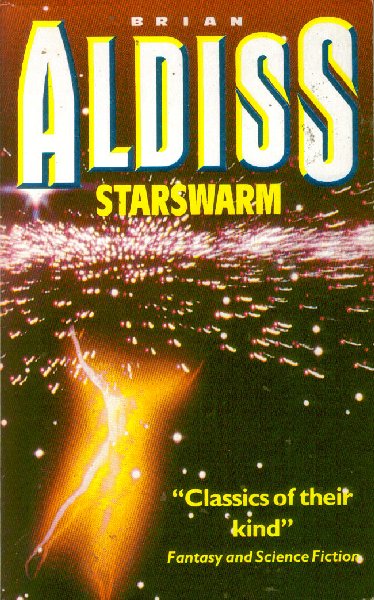