The first guest post in my series SF Short Stories by Women Writers pre-1969 (original announcement) comes via Rachel S. Cordasco (follow her on twitter) who runs the spectacular, and much needed, resource Speculative Fiction in Translation and who blogs on literature more generally at Bookishly Witty.  She also writes for tor.com and Book Riot.

Her post focuses on three stories by French women writers: “The Devil’s Goddaughter” (1960) by Suzanne Malaval, “Moon-Fishers” (1959) by Nathalie Henneberg, and “The Chain of Love” (1955) by Catherine Cliff. 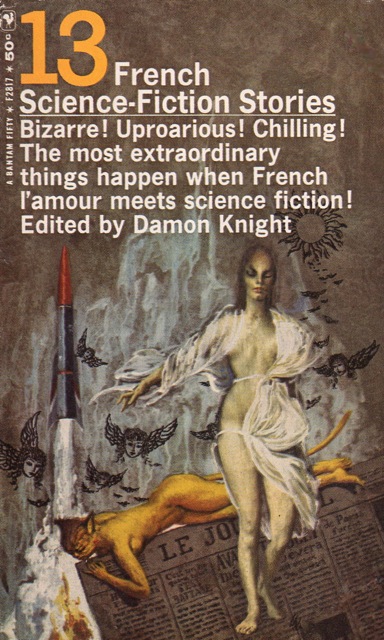 Don’t be put off by the purple prose on the front and back covers; 13 French Science-Fiction Stories is a fantastic resource for anyone looking to read more widely in the genre. To his credit, Damon Knight includes five stories by women writers (three of those stories are all by Nathalie Henneberg). These radically-different pieces showcase the exciting variety of approaches to sf pre-1969, and each introduces us to French women writers of sf whom we might not have heard of before. And so, without further ado, I give you some thoughts on “The Devil’s Goddaughter” (1960) by Suzanne Malaval, “Moon-Fishers” (1959) by Nathalie Henneberg, and “The Chain of Love” (1955) by Catherine Cliff.

At just four pages, “The Devil’s Goddaughter” is a bizarre and unsettling allegory(?)/folktale(?) about a girl who is the last in a family of eight children and thus can’t find a godparent in town. So of course the devil steps in and offers his services. Over her mother’s protests, Fanche’s father accepts the devil, and eventually the girl is kidnapped by him and dragged into Hell. Eventually, the devil tries to seduce her, but when Fanche protests, he offers her the chance to leave if she can solve a few riddles. The devil’s wife (yes, he’s married) gets jealous and tells Fanche all of the answers, thus securing her release. The “punch line” of the story is that the rain that Fanche notices after her escape is due to the devil beating his wife. Science fiction? Nnnnnnot really. A strange and twisted take on an old wive’s tale? Most definitely. 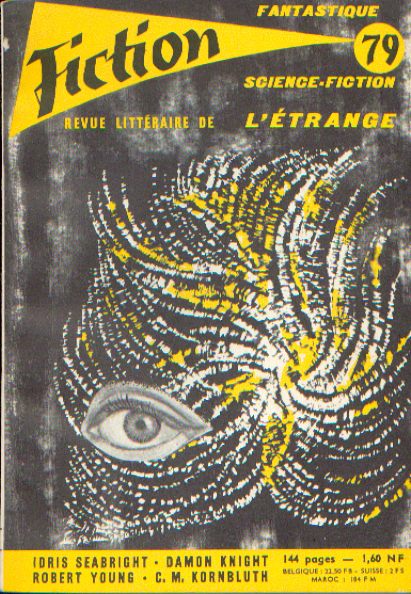 Catherine Cliff’s story, however, fits much more neatly into the “science fiction” box. When an out-of-work actress contemplating suicide is brought in off the street by a mild-mannered “man” and cared for without any apparent strings attached, the scenario seems too good to be true. Little by little, though, we learn that the “man” is actually an alien, one of a small group that has blended in on Earth while remaining slightly aloof, acting like tourists all the while. Cliff expertly guides us through the actress’s growing blind devotion to this “man,” culminating in the her realization that she has become his pet in the exact same manner that a human would have a dog or cat. This story is sinister, careful, crafty, and slightly spine-tingling at the end. 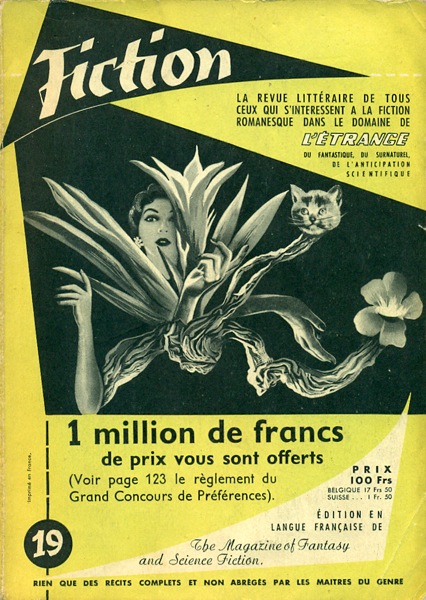 But I have saved the best for last: “Moon-Fishers” is a trip like no other. Knight notes that Henneberg is one of France’s most acclaimed sf authors, and it’s easy to see why. Her stories are complex labyrinths, built with lavish, sensuous sentences, often interested in the clash of the past with aliens/alien technology. In this story, set in the year 2500, a test pilot named Hugh Page is sent into ancient Egypt via a machine in the Paratime Research laboratory. As the professor in charge of the project explains just before Hugh sets off, time travel is no longer thought of as a physical form of travel. Rather, it is based in the perceiver’s brain: “The time that acts on matter is external to it. Our contact depends on extrasensory perception”… “[t]he present is built on an uncertain past, looking forward to a multiple and plastic future” (61-2). Pretty brain-twistingly awesome, I say. Once Hugh finds himself in ancient Egypt though, it’s all Stargate from there. Seriously- you’ve got soul-swapping and aliens and ancient Egyptian pharaohs. Hugh winds up trapped in this past and another body (Amenophis), but this is somehow what was supposed to happen all along. Henneberg makes parts of your brain light up that you didn’t even know you had. And she crams it all into about 20 pages.

I don’t know about you, but I’m all geared up now to read as much Nathalie Henneberg as I can find, and much more sf written by French women in general. 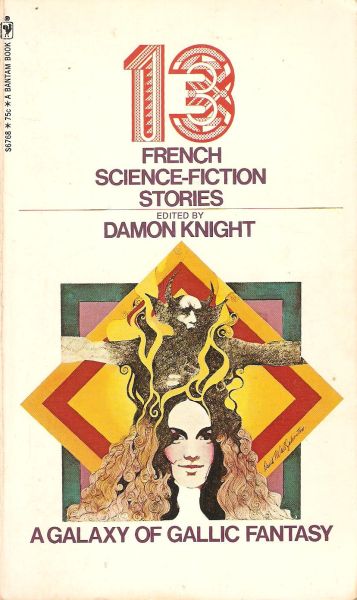 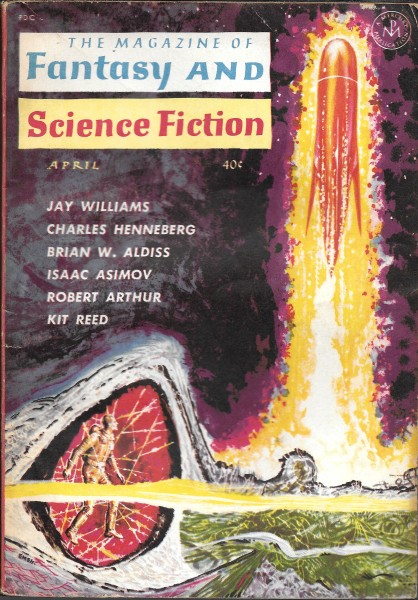 For more reviews consult the INDEX