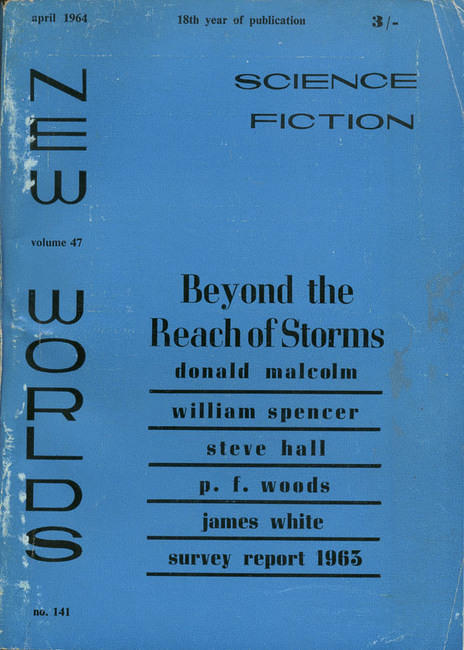 To mix things up a bit I decided to review four stories in John Carnell’s last issue of New Worlds Science Fiction (April 1964) before he handed over the reins of the dying publication to Michael Moorcock, who would elevate it to New Wave greatness. Other than the James White serial Open Prison, which I plan on reading in book form when I procure a copy, three of the four authors reviewed below owed much of their careers to John Carnell, and would see few stories in print after his departure (see the individual story reviews for details). Only Barrington J. Bayley, writing as P. F. Woods, would see continued publication (and growing popularity) in New Worlds under Moorcock.

Of the stories I recommend reading William Spencer’s rumination on overpopulation and urban life,  “Megapolitan Underground.” The others are worthwhile only for die-hard fans of Carnell’s New Worlds and other editorial projects.

“Beyond the Reach of Storms,” Donald Malcolm, 2/5 (Bad): The collection immediately drops us in the middle of a sprawling  hard science mystery: “Out at the edge of the Milky Way, where stars are lonely beachcombers on the shore of an unimaginable sea of space stretching two million light years to the next island of light they found a strange sun” […] “like a doughring.”

The Survey Ship Starfire, with a crew of (apparently) entirely men, recalls its Planetary Exploration Teams after encountering a “dilemma with three horns” after three weeks on the planet Palmyra. In flashback we learn their story….

The discovery: Lengthy astronomical discussions transpire across pages and pages like the banter on a Star Trek bridge (but amidst lots of masculine sparring and cigars and glowing cigarette tips and bets) but in paragraph form: “The material in the ring is highly ionised and the star is rotating very quickly, the period being thirteen hours, ten minutes and fifteen hours, as computed form available data” (feels like when I accidentally signed up with an astronomy class for majors rather than non-majors as an undergrad). Maybe that’s why I hate technobabble even if it has a “real” scientific core idea? Eventually survey teams are sent into the space within the star, “The Hole” — possible a “gateway to other areas of space.” And, on the other side, there is possibly an intelligence!

Contact: From the viewpoints of multiple scouts sent inside The Hole we learn about the discovery of the planet Pamyra with its Eden-like landscape…. And eventually the intelligence chimes, “Greetings, men from Earth.” The crewmen learn about the Guardians who serve the Creator, and that humans have passed the test and can join the ranks of the apprentice Guardians. The crews bring back a box, given to them from the Guardians. And of course, it comes with a warning — do not open!

For the fans of step-by-step guides to astronomic discoveries with a good dose of pseudo-religious babble…. For others, like me, who are intrigued by the “science” but want a good story for the science to snuggle and cuddle and mingle with, avoid…. 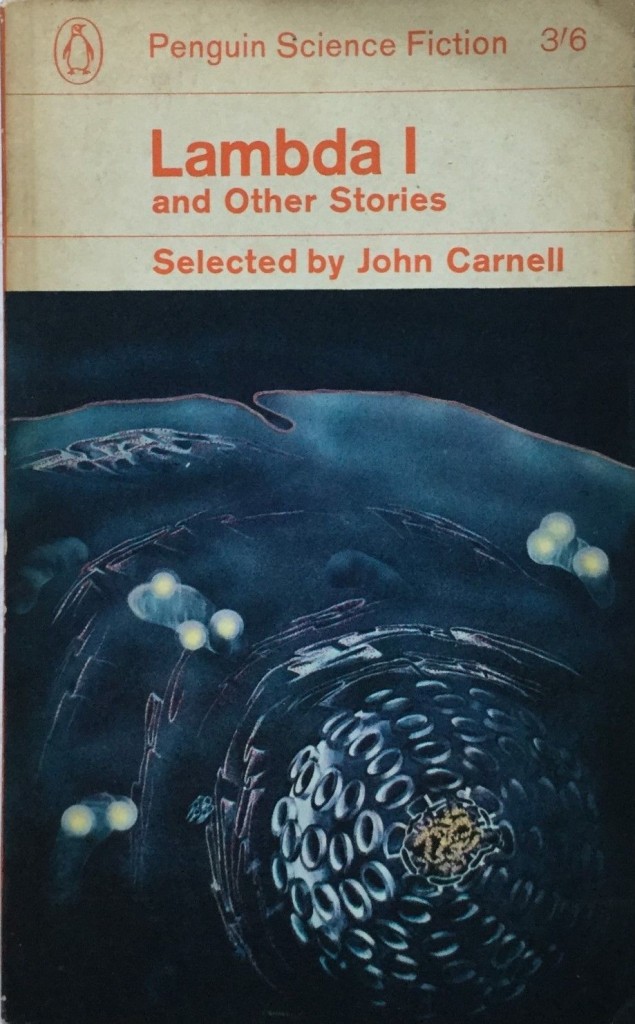 I get the sense, especially from Carnell’s later New Writings in Science Fiction series, these were the stories that truly tickled his fancy. Unsurprisingly, Carnell reprinted it in Lambda I and Other Stories (1965). Malcolm published a substantial number of short stories in John Carnell publications and two novels with Laser Books.  I will  not  be  tracking  them . 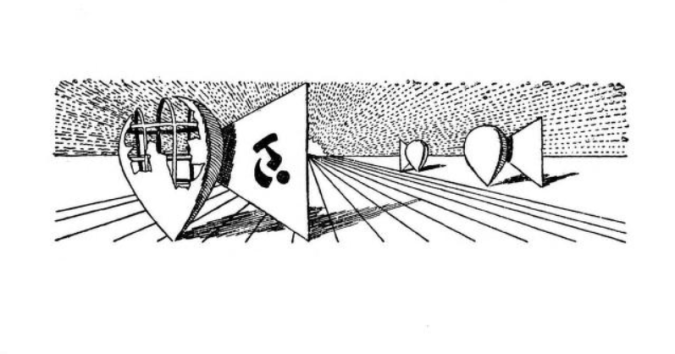 “Megapolitan Underground,” William Spencer (1964), 4.5/5 (Very Good): The surprise of the collection! It is a dying shame Spencer’s paranoid and disconcerting rumination on the psychological effects of overpopulation was never reprinted.

In a future overpopulated world, the crowds journey from place to place by means of a “travel-track.” Strategically placed viewscreens, observed when facing backwards on the “travel-track,” lull and transfix the viewer–offering small scenes and advertisement. The narrator, Blundell, speculates on the patterns of the screens, the reason for the “travel-track,” the character and thought of his fellow passengers crammed together all within their own worlds…. He ponders whether or not the “travel-track” has a more sinister purpose and a moment of disconcerting paranoia (the track malfunctions) has devastating ramifications.

This is a well constructed speculation on a technological invention that is far more than gimmick. Recommended.

Spencer was published mostly in New Worlds under John Carnell and then a handful of stories in Interzone in the 1990s before his death in 2018.

“Now is the Time,” Steve Hall (1964), 3/5 (Average): A humorless “humor” story about political decisions and arguments delegated to a machine….

“The Prime Minister of Euthanasia” and his political party are faced with the prospect of losing the populace’s favor. The opposition appears to have an insurmountable approval rating making calling an election a veritable disaster. The Department of Science minister has an idea to turn things around: “I my opinion, it is merely a matter of mathematics as to which policies will best appeal to the electorate, and once a problem has been reduced to an exact equation, it can be solved.” And to the National Electronics Laboratory supercomputer the problem of the election goes…. Despite the efforts of the opposition candidate with its well-oiled political machine, the Science Minister proclaims, without spilling the details, that prognosis of “electoral swing” is “30%” to give the victory to the establishment.  The government calls the election on the Science Minister’s guarantee. The opposition eventually discovers that they are “competing with a machine intelligence!” And, suddenly, the Opposition Leader has a brilliant idea to turn the entire scenario on its head.

“Now is the Time” was never reprinted. And I understand why…. it has a humorous and fun idea, computer programs used to come up with arguments to sway human voters — however, it’s told in a bland/functional way that is far from memorable.

Hall published a handful of short stories, mostly in John Carnell publications, between 1962-1964. Few were reprinted.

“Farewell, Dear Brother,” Barrington J. Bayley as P. F. Woods (1964), 3/5 (Average): A man from an expedition to “Celenthenis, the Planet of Cold” (“it’s right at the dead end of creation”) arrives at a house party. His handful of words about his experience–“No, but you can see it [the cold]. Goddammit, you can feel it. But not with your senses. With your emotions. Get me?”–strike a cord with the narrator, as he, and his brother, were on the ship that discovered the planet! And the narrator’s brother “lives” in his attic, rigged with a complex refrigeration device….

The narrator recounts his strained but interconnected past with his more irresponsibly twin brother— their lives as “go-getters […] glorified galactic scrap merchant [s]” who go into all the unexplored areas selling information and occasionally resources they discover and their fateful meeting with Professor Juker, who specializes in low temperature physics.

This is similar to “Beyond the Reach of Storms” as it focuses on the scientific core idea (the mysterious planet of extreme cold) but is far bettered told and has a disconcerting undercurrent throughout (no pun intended). Unlike the Malcolm’s story, Bayley tries to focus a tad more on character and setting. Still not intriguing enough to track down in my view…

Reprinted in Bayley’s collection The Seed of Evil (1979) 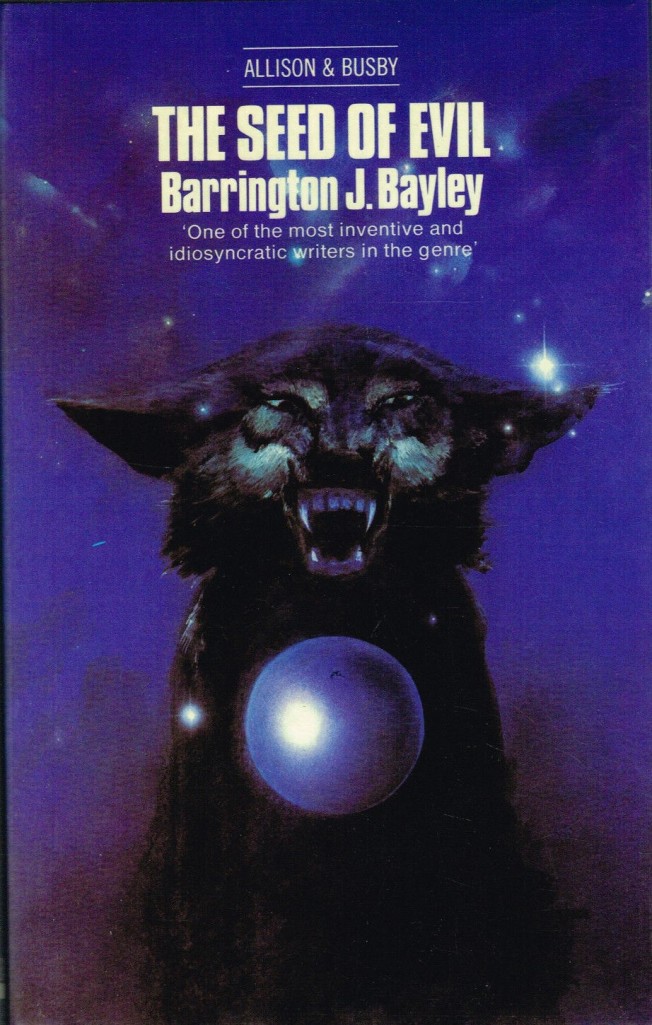