Initial note: This is the inaugural post in a series of vintage generation ship short fiction reviews. You are welcome to read and discuss along with me–all of the stories I’ll review will be available online–as I explore humanity’s visions of generational voyage!

Chad Oliver’s “The Wind Blows Free” (1957) first appeared in the July 1957 issue of The Magazine of Fantasy and Science Fiction, ed. Anthony Boucher (Internet Archive link). Despite the simple premise, Oliver’s powerful delivery and imagery reaffirmed my love for generation ship stories and their common tropes: generational change, the science of survival, the architecture of arks, the moment of arrival on a new world….

The story tells the tale of Samuel Kingsley, who, from birth, “walked his own path and fought discipline like a wild stallion” (14). His world, bounded by the metal “belly of [a generation] ship,” is all too small (15). He tries to escape into books but their tales of men who “struck on their own” adds kindling to his burning desire to escape.

The mechanisms of control, that have kept generations focused on the mundane rituals of survival in an enclosed and perfectly balanced world, kick in as they have for hundreds of years. The Heritage Day celebration, performed at The Show (the ship’s central square), a “perfectly ordinary tri–di theater,” a sensory bombardment of reaffirmation of Conservatism—stay the course! Humanity is at stake! Earth is but a wasteland!

“This is Earth. This was your planet. Look at it now. Sam looked, his heart thudding like a wild thing in his chest. He saw desolation, and death, and worse than death. He saw great cities gutted, their buildings shattered, their streets ripped like tissue paper. Black windows stared at him with cold stone eyes. A few figures that might have been human stumbled through the ruins, clawing at their faces, their shredded clothes, their blistered bodies” (18).

After Heritage Day, when the smallness of his world is put into perspective, Sam tries to do what is expected. He joins the hydroponic team. He tries to believe that “the voyage would never end” and that “the Ship was all there was” (20). But the crew know his rebellious past. They pass him over, despite his brilliance, for a position in the crew. And, after years of work, his passions can no longer can be restrained and he sets off into dark tunnels away from the bowels of the ship: “AUTHORIZED PERSONNEL ONLY. Sam smiled and stepped into the cave of night” (23).

At its core “The Wind Blows Free” explores the generational trauma of interstellar voyage. The mechanisms of control–Heritage Day and its searing images of societal destruction, the rigid roles and regulations, the separation between colonists and crew–that enabled humanity to make its journey outward become the very forces keeping humanity encased within the metal vessel. While only the crew know the secret, they are possessed by a fear of the outside world. In tradition there is certainty. In ritual there is affirmation of purpose. Perhaps the subliminal impact of Earth’s devastation, used to compel all to focus their efforts on survival in the depths of space by highlighting the devastation of Earth, remains imprinted in the minds of the crew.

While I’m unsure if Oliver wants the reader the take the logic in the following direction—a figure like Sam, impulsive and brilliant, is the very sort who might create new and devastating conflicts on a virgin planet.

MPorcius’ reviewed the story here. He also enjoyed it. 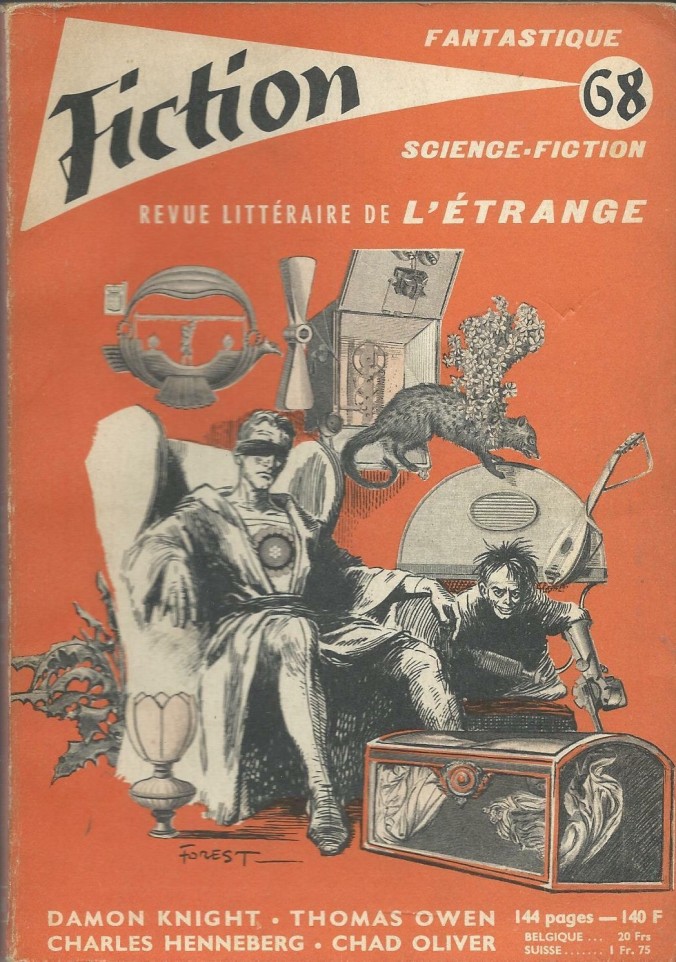