Here are my favorite films and science fiction novels I’ve reviewed this year (and some other interesting categories) with links to my reviews….

Watch them! Read them! Gaze at them!  (the array below….)

Silverberg’s The World Inside is a fascinating take on the theme of overpopulation — what if society was organized towards a single goal, propagation?  What would society look like?  What position in society would women occupy?  Men? What would cities look like? Hallways? Rooms? Institutions?  What happens to those who don’t fit in?  Or, can’t have children?

D. G. Compton’s The Unsleeping Eye is a dark and literary take on a future society where people have increased life expectancies.  A man is employed by a reality television channel and implanted with a camera in his eye to spy on a middle aged romance novel writer with a terminal illness.  In my top ten favorite science fiction novels.

Although told in a somewhat simplistic manner, Silverberg’s Hawksbill Station is a intriguing take on time travel (one-way time-travel) — time-travel which allows prisoners to be sent back to Earth’s Cambrian era.  This prison, in a geographically bleak early Earth with few forms of life, is home to a variety of political dissidents who struggle to survive and remain sane.

I admit, the pool was rather small considering I didn’t write very many film reviews this year (for rather nebulous unexplained reasons).  Dogtooth was a fascinating experiment — and perhaps the strangest (darkest?) film ever nominated for a Best Foreign Film Oscar.  Be warned, the film is a depressing and violent rumination — three children raised under the most unusual of circumstances by sadistic parents — an invented language, a wall, illicit films…

I’ve read five of D. G. Compton’s novels this year — The Unsleeping Eye (1974) (REVIEW), Synthajoy (1968) (REVIEW), The Quality of Mercy (1965) (REVIEW), and The Steel Crocodile (1970) (REVIEW) have ranged from solid to brilliant.  The Missionaries (1972) (REVIEW) was a complete and utter dud.  Compton constructs strong female characters with whom our sympathies lie.  He’s fascinated with the interplay between science vs. religion, government vs. individual rights, and themes such as spying, voyeurism, the male gaze (literally)…

Katherine MacLean’s Missing Man (1975) (REVIEW) is a seldom read gem of immaculate world-building and multi-faceted characters — an earlier incarnation of the novel (in novella format) won the 1971 Nebula.  MacLean is more famous for her short stories but Missing Man deserves to have a larger audience — pick up a copy! 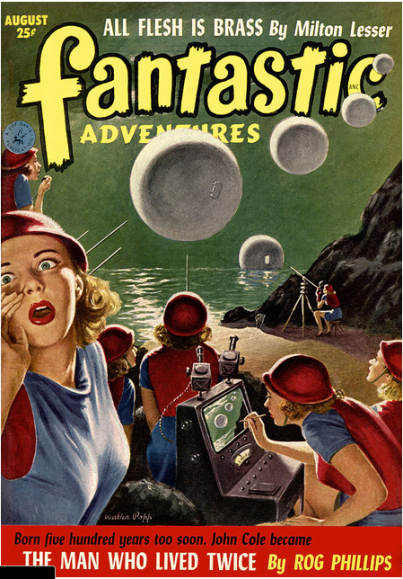 Run away from this piece of drivel — thank goodness not all early Silverberg is this bad.  It receives a .25/5 for the sole fact that it is comprised of sentences.

Uncredited cover for A. M. Lightner’s The Space Olympics (1967)

In the future the olympics will have the same sports.  A constipated athlete.  Docile collie — you gotta have a collie.  Little boy doing the chainsaw….  And a rocket is a must, or, it wouldn’t be the future.

For the rest of the post see, Adventures in Science Fiction Cover Art: The Best of Alex Schomburg’s 50s Novel Covers