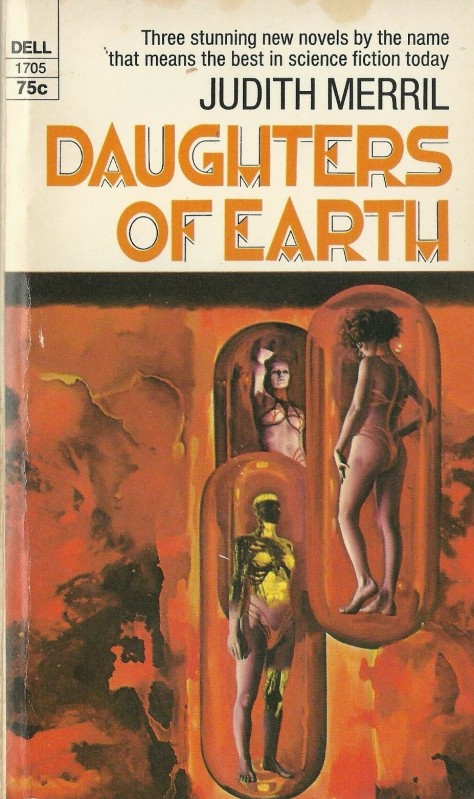 (Robert Foster’s cover for the 1970 edition)

Judith Merril was not only an important early science fiction author of novels and short stories but a political activist and a member of the influential 1940s sci-fi group known as the Futurians (members included her husband Frederik Pohl, James Blish, Damon Knight, David A. Wollheim, C. M. Kornbluth, et al.).  Her fascinating collection, Daughters of Earth (1968), contains three novellas from the 1950s: ‘Project Nursemaid’ (1955), the highlight of the collection — ‘Daughters of Earth’ (1952), and the underwhelming ‘Homecalling’ (1956).

All three contain a plethora of female characters who challenge the traditional roles women were often relegated to in science fiction of the time.  ‘Project Nursemaid’ and ‘Daughters of Earth’ are highly recommended for fans of the more intelligent 50s works touching on social science issues.  ‘Homecalling’, despite a rather outlandish premise, is readable and at moments affecting.

I will definitely keep an eye out for Merril’s novels and short story collections.

‘Project Nursemaid’ (1955) 4/5 (Good) (89 pages) — The powers that be on Earth desire to establish a moon colony.  However, due to the effect of low gravity on the human body, women are unable to give birth on the moon without complications for both the mother and the child.  Instead, the army has developed a technology to remove the child from the mother before it comes to term — these unborn children are sent to the moon in surrogate wombs where they are able to adapt to the low gravity before “birth.”  It is up to a Colonel (trained as a psychologist) not only to convince women to have their children removed (often women who would have an abortion or aren’t married) but also screen older women to serve for a year at a time on the moon as nurses for all the babies in their surrogate wombs.  This task proves incredibly difficult.  Despite a few melodramatic moments with his young interviewees, the Colonel proves to be a good man who sincerely wants to help both the women who give up their unborn children and see the project through successfully.

The novella at moments feels like a piece of later social science fiction (deals tentatively with issues such as pre-marital sexual relations, young motherhood, abortions, etc).  At other moments, ‘Project Nursemaid’ comes off as a rather dry “how do we do it” pseudo-manual for birthing moon babies and calming young Earth women.  How the children will be raised on the moon with only a few “mothers” and no fathers (well, some of the nurses might eventually be men) is only touched on for a page or two.

‘Daughters of Earth’ (1952) 4.5/5 (Good) (68 pages) —  is the standout novella of the collection.  The first lines: “Martha begat Joan, and Joan begat Ariadne.  Ariadne lived and died at home on Pluto, but her daughter, Emma, took the long trip out to a distant planet of an alien sun.  Emma begat Leah, and Leah begat Carla, who was the first to make her bridal voyage through sub-space, a long journey faster than the speed of light itself” (97).

Although plagued with some unfortunate tendencies of the pulp era (silly aliens), ‘Daughters of Earth’ traces humanity’s exploration and colonization of the galaxy over multiple generations through the women of one family.  Merril adeptly inverts the Old Testament Biblical trope of tracing generations through the fathers (à la “and unto Enoch was born Irad: and Irad begat Mehujael: and Mehujael began Methusael: and Methsael begat Lamech” Genesis 4.18).  She also weaves between the plot driven fragments a fascinating metatextual element — the novella is an admittedly rewritten collection of family documents for the education of future daughters of the family — the work itself conveys the lessons necessary for the family’s future generations of intelligent daughters who will undoubtedly set off on grand adventures, invent new technologies, and discover new planets.  ‘Daughters of Earth’ contains extremely positive portrayals of female scientists who are often simultaneously mothers, intrepid pioneer women willing to set off on their own, and have tender relationships with men whom they happen to meet (often, of lower occupational levels which inverts the common 50s portrayal).

‘Homecalling’ (1956) 3.75/5 (Good) (90 pages) — I initially was put off by the beginning of the novella because the premise, was well, too unbelievable.  However, as the work progresses, Merril is careful never to be too over-the-top in her portrayal of her young precocious child protagonist and as a result, the work is often believable and moving.

Eight year old Deborah and her baby brother are the only survivors of a spaceship wreck on a forested planet.  For a few days Deborah takes care of her brother in the wreckage of the ship (most of it is still intact except for the piloting compartment where her parents were).  After a while she decides to explore the vicinity and comes into contact with intelligent human child sized insect aliens — with a large queen and are telepathic.  Deborah learns to communicate with the aliens after her initial fright.  The novella is successful because it is narrated from both the perspective of alien Queen insect — who exudes “motherness” — and  Deborah, who cares deeply for her brother.  ‘Homecalling’ is a readable story about first contact despite the nature of the aliens.