The concept behind Brian Aldiss’ short story collection Galaxies Like Grains of Sand (1960) is intriguing.  Take previously published stories (in this case from magazines in the late 50s), graft them together by means of mini-introductions, and arrange them so they fit into a future history framework à la Olaf Stapledon’s Last and First Men (1930) or Isaac Asimov’s Foundation Trilogy (1951-1953).

The quality of the stories makes the format less than successful.   Only three stories are worth reading — ‘Secret of a Mighty City’ (1958), ‘Out of Reach’ (1957), and ‘All The World’s Tears’ (1957).  Also, Aldiss’ tendency to state in between stories that “thousands and thousands of years have gone by” means that the logic behind a particular progression of millennia is not always clear.  Also, one gets the sense that Aldiss is forcing his stories to fit into a particular future history framework — i.e. clearly the last story has to be about the “last” men, but all these in between, how are they going to fit?  Aldiss groups all the stories under “The Law of Transience” (7).  But again, by following this law any vast variety of tales can be grouped.

On the structural and conceptual level Galaxies Like Grains of Sand is a fascinating attempt to organize/contextualize a series of short stories.  The delivery is less than satisfactory (besides the three stories listed above).  Worthwhile for fans of Aldiss and 50s Future Histories.

The War Millennia — ‘Out of Reach’ (1957) (15 pages) 4/5 (Good):  The second best story of the collection.  While bombs are falling outside, the Directory of Dreamy Five enters the dreams of one of his thousands of “slugs” i.e. patients.  The context is intriguing, the a Race War (perhaps derived from the Cold War) has produced so much stress and fear that large percentages of the world have gone insane or escaped from their worries by entering dreameries.  Unfortunately, when the director enters Floyd Milton’s dream the story loses the power evoked by the earlier scenes.  The Director’s patient replays and replays his love affair and marriage to a Solite.  The Solites are humanoid “aliens” who appeared on Earth but didn’t offer to end the violence — instead, they saved plants, animals, and took Floyd with them.  A silly time travel twist weakens the work.

The Sterile Millennia — All The World’s Tears’ (1957) (12 pages)  4/5 (Good):  In the thousands of years after the Race War and the Era of Overpopulation the Earth has been entirely transformed.  All the whites were exterminated in a nuclear bombardment of the moon — due to which the moon still glows red in the sky.  After such extensive fighting, the remaining people despise nature and their fellow men.  They live in carefully constructed houses where they rarely interact.  They are also prone to sink into deep malaise.  Smithalao’s task is to rile up those wallowing in self pity in order to force them to visit the Mating Center.  And then he observes an illicit love affair between two people who are forbidden to mate by the Center.  With explosive ramifications…

The Robot Millennia — ‘Who Can Replace A Man?’ (1958) (10 pages) 3.75/5 (Good):  Few people survive Smithalao’s age.  Those that remained created vast farms staffed by robots.  When humans disappear from a farm the robots are left to fend for themselves.  Which robots seize power?  And what will the bands of robots do when they encounter other robots with more sophisticated brains?  And what will they do when they suddenly come across one of the few remaining men?  Robots in science fiction needed Asimov to offer more sophisticated way that humans would program their mechanical helpers.  Here, Aldiss’ programing simply means obeying man.  One would think we’d be so much more carefully in delineating what a robot can or cannot do.  A rather simplistic take on a very complicated issue.

The Dark Millennia — ‘O Ishrail’ (1957) (15 pages) 3/5 (Average):  It isn’t all together clear how this story is related in the chronology to the previous one.  Regardless, Earth has become incredibly isolated from the external world.  All the spaceships have rusted away, knowledge of the other planets has disappeared  and most people live on farms or small cities.  A man claiming to be human appears on Earth.  A nice-hearted man still doesn’t believe his story and hands him over to a mental health ship that travels up and down the rivers treating those who need assistance.  The doctors refuse to believe the man’s story.  But, reconnection with vast galactic Empires is already underway.  A dull “first contact” story but with no aliens.

The Star Millennia — ‘Incentive’ (1958) (18 pages) 2/5 (Bad):  After Earth has reconnected with the vast Galactic Empire of humans, who have often evolved in different directions, it is treated as a colony.  Aldiss is clearly inverting the colonial paradigm found on Earth during the 50s.  Earth is now the colony to a vast “superior” Commonwealth.  Farrow, the head of the isolationist party on Earth, contacts the Governor.  Soon he is introduced into powers beyond his comprehension.  And the powers of Galingua, the Galactic language, that allows space travel.   Yes, a language with the power to transport people across vast distances.  An incredibly silly ruination of an intriguing commentary on colonization.

The Mutant Millennia — ‘Gene-Hive’ (1958) (20 pages)  2/5 (Bad):  Another utter clunker of a short story based around a 1950s understanding of evolution.  Apparently, evolution can be instantaneous and “triggered.”  Think Hulk or another superhero transformed by radiation.  Mankind is clearly on its last legs and a new breed is coming.  A healing woman triggered spontaneous evolution in an injured man.

The Megalopolis Millennia — ‘Secret of A Mighty City’ (1958) (17 pages)  4.75/5 (Very Good):  I’m unsure how this story fits within the future history Aldiss lays out even with the linking mini-introduction.  It clearly belongs before the previous story.  Regardless, it is by far the best of the collection.  Thankfully it appeared in another Aldiss short story collection, The Canopy of Time (1959).  Earth is comprised on one massive city.  Rhapsody, who works for a movie studio, has come across reels of footage of a documentary of the city and its true nature made by Ars Staykr.  Think Walter Ruttman’s film Berlin: Symphony of a City (1927) or a less avante-garde version of Dzinga Vertov’s Man with the Movie Camera (1929).  Rhapsody claims there is enough material to make a film for the masses.  The studio agrees — of course, the true nature of the city, apparent in the original footage, is lost in all the glit and glamour — transformed completely.  An idealized vision of a city that in no way exists.

The Ultimate Millennia –‘Visiting Amoeba’ (1957) (29 pages)  2/5 (Bad):  The last story is the worst of the collection.  An unusual humanoid with shapeshifting abilities from the Galaxy’s outer reaches involves himself, for unclear reasons, in a series of petty wars undertaken by petty states.  Mankind’s time has clearly passed and Aldiss’ usual imagination deserts him. 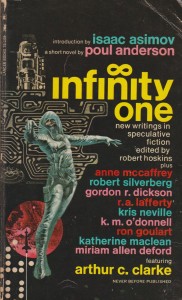 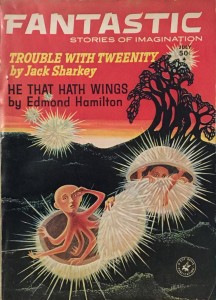