A short story collection by an author I have termed Mr. Perpetually Average But Readable, Bob Shaw.  I am interested in whether or not his visions are more concise/poignant in short story form.  I suspect a book like One Million Tomorrows (1971) would have been amazing in short form, especially the disturbing portions that take place in Africa (the UN forcefully administering immortality treatment on people who do not want them)….

A Nebula award nominated novel by Marta Randall, Islands (1976)—immortality themed, seems (at first glance) to be on the allegorical side = I have high hopes.

More Brunner! (Despite his warning, I was influenced by a review over at Speculiction…. here)  But then again, I am a Brunner completest…. And finally, a relatively unknown British SF novel, Implosion (1967) about a decreasing population.  Despite words of warning from reviews like Ian Sales’ (here) I couldn’t resist the Vincent Di Fate cover.

(Uncredited cover for the 1975 edition)

From the back cover of an earlier edition: “A baker’s dozen of the best, including “What Time Do You Call This?” — a widely ironic story about a bank robber who shuttles to an alternate universe and runs into himself.  “Communication”— a modest plan by a shaman spiritualist gets out of hand when the dead begin to contact him.  “…And Isles where Good Men Lie”—a space caravan of scale-armored, bacterial-laden immigrants begins to make landings on Earth every twenty-two hours… and is likely to do so for the next twelve centuries.  And many more in which TOMORROW LIES IN AMBUSH.” 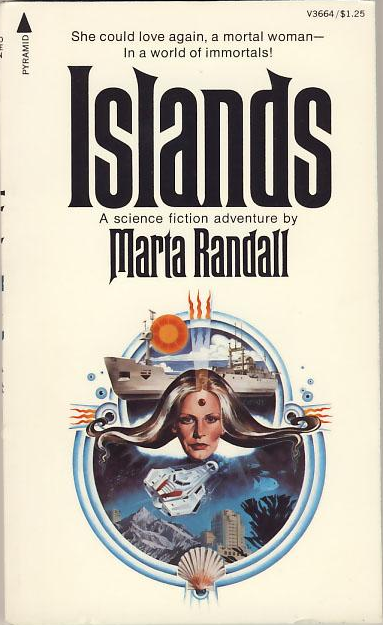 From the back cover of the 1980 edition: “Islands.  She was Different.  The immortality treatments had failed.  She was destined to grow old, to wither ad fade among them—the wondrously beautiful, gloriously van, Immortals.  After the floods, they rebuilt the earth.  Now the Immortals lived in transmutable homes, they traveled the galaxy, they colonized the sea floor.  There was no place for her in their sparkling cities.  Because she was different–she would die.  Her refuge was aboard ship, on the Ilium.  Her ocean-floor exploration of buried islands yielded treasures the Immortals prized.  But among the ruins she discovered a dark, enclosed place—a special room which contained a power the Immortals had lost, a power that if she could but learn it, would transform the world forever…”

(Diane and Leo Dillon’s cover for the 1971 edition)

From the back cover: “WHEN CHAOS RULED THE COSMOS.  The time was the unguessably remote past–or perhaps the distant future.  Throughout the universe, Chaos ruled.  Scientific laws of cause and effect held no force; men could not know from one day to the next what to expect from their labors, and even hope seemed foolish.  In this universe there was one man to whom had been entrusted the task of brining reason and order out of chaos.  He was a quiet man dressed in black who carried a staff made of light, and wherever he went the powers of Chaos swirled around him, buffeted him, tested him.  He fought them, and little by little he drove them back.  But the Traveler in Black himself belonged to the anti-science universe.  If he succeeded in his task of changing the order of the cosmos, could he continue to live?”

From the black cover: “IMPLOSION.  An inexplicable decline in birthrate leads to an investigation and the discovery that the water of Great Britain has been poisoned by a chemical that has left almost all the women sterile.  Dr. John Bart, Minister of Health, must find a way to remedy the situation.  He decides to put all the fertile women in breeding camps, and then learns to his horror that his own wife is among those who must go…”