Adored An Infinite Summer (1979), had to procure more Priest…

William Tenn, great short story author—needed more! I had previously read both Of Men and Monsters (1968) and his collection The Human Angle (1956).

(Uncredited cover for the 1957 edition)

From the back cover: “Shocking— Startling — Incredible.  13 strange and unusual stories set against the background of new worlds and fantastic futures—

A woman is terrorized by the strange creatures she carries in her womb.

A man substitutes for a robot in a new kind of prize fight.

A vampire decides to have a funeral for himself.

A little girl gets lost in another dimension.

And many, many more exciting stories by the talented author of THIRD FROM THE SUN, I AM A LEGEND [sic], THE SHRINKING MAN. 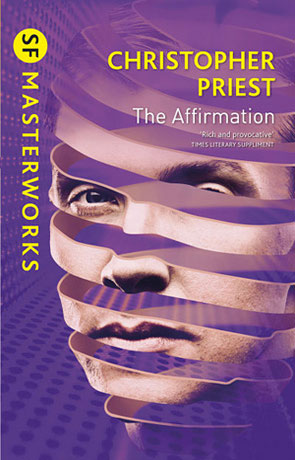 (Tyler Stalman and Julyan Bayes’ cover for the 2011 edition)

From the back cover of an earlier edition: “Peter Sinclair is tormented by bereavement and failure.  In an attempt to conjure some meaning from his life, he embarks on an autobiography.  Soon he finds himself writing the story of another man in another, imagined, world whose insidious attraction draws him forever further in.  a major work of fiction from one of Britain’s most exciting authors.”

(Stephen Miller’s cover for the 1968 edition)

From the back cover: “THE SEVEN SEXES is almost entirely dedicated to the cynicism of nature’s prime conman, homo sapiens, in such a variety of stories that it is difficult to believe they all derive from the same source, capped by a hilarious piece of nonsense in which a has-been producer cons the seven variable sexes of Venus into starring in a “typical” Hollywood love epic—with results that defy description.  This book is part of a simultaneous six volume publication celebrating William Tenn, and featuring his first full-length science fiction novel, OF MEN AND MONSTERS.”

(Stephen Miller’s cover for the 1968 edition)

From the back cover: “Of the six volumes of William Tenn’s work now made simultaneously available, THE WOODEN STAR comes closest to being a pacifist collection, the general theme being an ironic and sometimes bitter comment on man’s stupidity to man.  But Tenn’s humor is irrepressible and bursts forth in a joyous satire on the ways of the sexes titled “The Masculinist Revolt”—which may yet bring codpieces back into fashion.”