More Kit Reed! I enjoyed both her first short story collection Mister Da Vi (1967) and first SF novel Armed Camps (1969).  I was impressed enough to track down another—and as she has informed me via twitter “rare”—collection.  Rare enough that she does not even own a copy!

Fresh off Tom Reamy’s dark and wonderful Blind Voices (1978), I thought it would be best to explore some of his early short fiction.

There’s nothing wrong with another Robert Silverberg collection from his heyday (late 60s-70s), although, I have read at least two of the thirteen stories in the collection already.

Frank M. Robinson in the early 90s jumped back on the SF scene with the well-received generation ship novel The Dark Beyond the Stars (1991).  More involved with editing over the decades, he published in the 70s a series of famous thrillers with Thomas N. Scortia.  I found a copy of his first novel, The Power (1956), although, the presence of telepathy (my least favorite SF theme?) makes me less than enthused.

Three of the four following books came via Mike at Potpourri of Science Fiction Literature and Tongues of Speculation—he visited Uncle Hugo’s in Minneapolis and sent me 10 (!!) books I had on my “to acquire” list.

Thoughts and comments are welcome (as always!).

(Paul Alexander’s cover for the 1978 edition)

From the back cover: “A TRIP OR TWO TO THE END OF TIME… ….the shimmering joys of holographic group sex, the first robot Pope, a dying Earth too beautiful to live, the last ugly man in the world: these are only a few of the bizarre, otherworldly and unfamiliar stories in this visionary new collection by an award-winning (and always surprising) master of modern science fiction.” 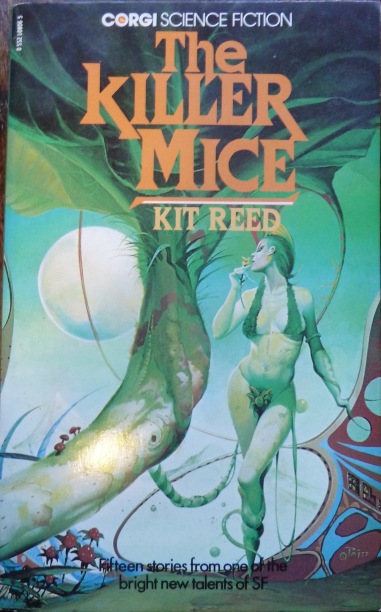 From the back cover: “THE VINE.  For centuries the Baskin family had tended the vine; no one knew precisely how old it was or who had planted it.  There were those who said the vine sucked the life out of the Baskins, and others who said the Baskins drew their life from the vine.  But whatever the truth it seemed as though the vine had an uncanny ability to survive even the worst disasters, while the Baskins were growing weaker all the time…

The Vine is just one of the stories from this amazing collection of stories by one of the bright new female science fiction writers.”

(Uncredited cover for the 1957 edition)

From the back cover: “The human mind has unknown, unused powers.  If one man could tap these latent abilities he would be as different from his fellows as they are from the apes.  And no man did unlock the depths of his mind—and by doing so became the enemy of the human race.  Only one other human being suspected the monstrous secret and set out to find the possessor of it—before he could destroy us all.  This is a novel of science fiction as real and urgent as the headlines of your morning newspaper.” 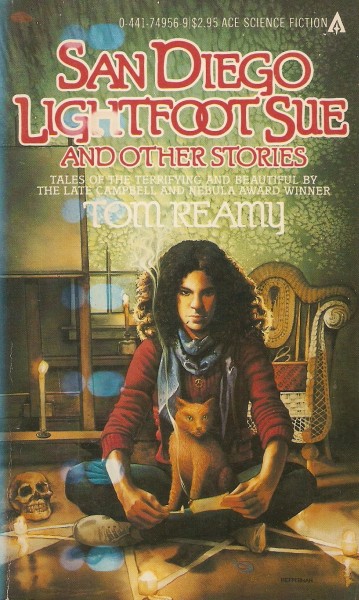 (David Heffernan’s cover for the 1983 edition)

From the back cover: “WELCOME TO TOM REAMY’S WORLD.  You might hear a middle-aged spinster scream as she faces a sixteen-foot monster with only one thing on his mind.

You might see a teacher cowering behind her desk as the children she taught all year advance on her with bloodlust in their eyes.

You might witness the ritual trek of the nuclear holocaust survivors, avoiding the subsurface creatures that feed on them.

One thing is for sure: you won’t return unchanged!