The Clarion Science Fiction Writers’ Workshop, started in 1968, continues to this day as one of the successful workshops for authors with instruction by the best the genre has to offer.  The alumni list is massive including Vonda N. McIntyre, Octavia Butler, Ted Chiang, Lucius Shepard, Bruce Sterling, etc.  For more on the workshop consult the SF Encyclopedia entry.  Robin Scott Wilson, the original director, published three anthologies decked out with the distinctive art of Gene Szafran.  I am now the proud owner of all three!

And many many many less familiar authors whose stories I will be keen to explore.

And, last but not least, A Frederik Pohl collection with a stunning Richard Powers cover.  He was in fine form in the early 60s.

(Richard Powers cover for the 1963 edition)

From the inside page: “In which, with characteristic satire, Fred Pohl deals with:

What happens to the Sirians when they invade Earth

A scientist with a conscience

And a most peculiar impregnation.” 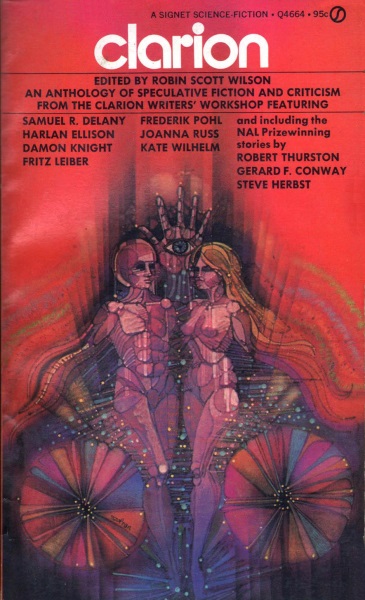 From the back cover: “‘Science fiction has been approached from many new directions; the Clarion Workshop is one of the most exciting’–Samuel R. Delany

Until recently science fiction was condemned to the purgatory of the pulps.  It is only within the past decade that this situation has been radically altered.  Science fiction is at last no longer considered a sub-literary genre.  The novels of Bradbury and Arthur C. Clarke, the works of Vonnegut and Borges, and the fantasies of Tolkien have all helped bring to science fiction the scholarly recognition it has long been denied.  Along with this resurgence in popularity and critical acclaim, the traditional sources from which science fiction writers were once exclusively drawn have been changing.  The magazine is slowly giving way to to the writer’s workshop; the most important of these is Clarion.  It is from the Clarion Science Fiction Writers’ Workshop that many fresh and important voices will emerge to set the tone and influence the direction of science fiction in the ’70’s.” 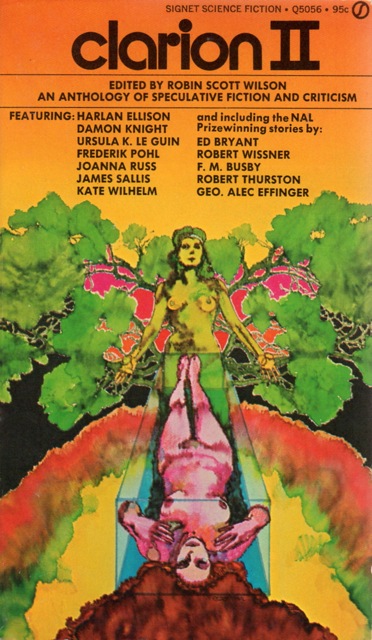 From the back cover: “‘Read this book… and then you may understand, at least intellectually, why it is that the Clarion/Tulane kids are considered… a very special, very loving, and very talented group of writers.’–Harlan Ellison.

Science fiction, once found only in pulp magazines that the reader was forced to shield behind a plain brown wrapper, has now become an accepted literary genre.  Today, writers’ workshops have replaced the pulps as a training ground for the new generation of authors.  One of the most important of these workshops was founded in 1968 by Robin Scott Wilson at Clarion State College.  The highly successful results of this enterprise were published in the first volume of this series, CLARION, which Theodore Sturgeon calls ‘the most valuable book yet written about science fiction.’

The present anthology is the product of two 1971 Clarion Workshops, conducted at Tulane University and the University of Washington under the supervision of Harlan Ellison, Robin Scott Wilson, Ursula K. Le Guin, and others.  Maintaining CLARION‘s high standards, CLARION II contains some of the finest examples of speculative fiction being written today.” 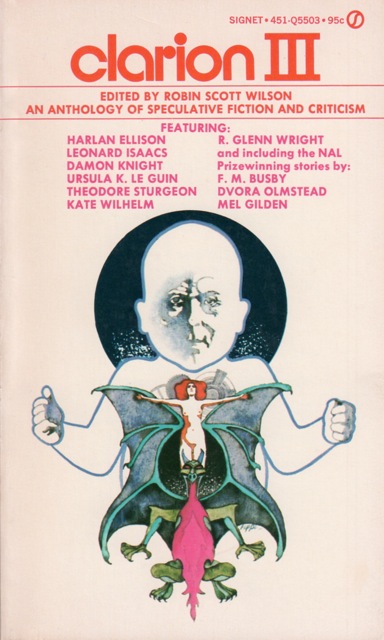 (Gene Szafran’s cover for the 173 edition)

From the back cover: “AND SO WE GIVE YOU CLARION III, WHERE:

ASCLEPIUS HAS PAWS: Have your feline friends psychoanalyzed you lately?

WHEN PAPPY ISN’T THERE:  If you want to be sometime badly enough, the years can be yours!

CANTALOUPES AND KANGAROOS: When your lion says “Good morning,” just pretend he isn’t there.