Megan (twitter) over at From Couch to Moon—who, with boundless wit and intelligence, enjoys exploring the turbulent seas of lesser known SF both vintage and contemporary—provides the sixth guest post in my SF Short Stories by Women Writers pre-1969 series (original announcement and list of earlier posts). Head over to her blog—do not miss her review of Brunner’s Stand on Zanzibar (1968) written in his style and more recent rundowns of various award slates, the 2015 Kitschies for example. 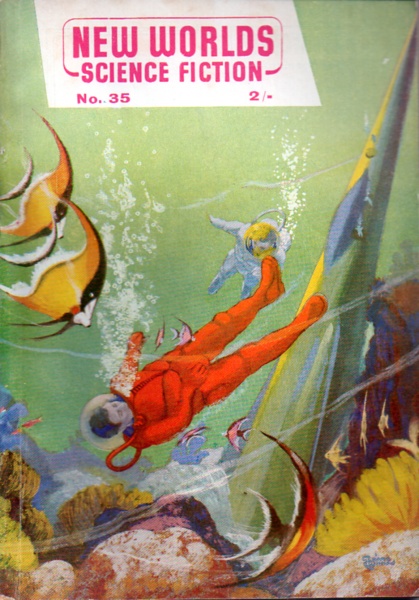 Not being much of a short fiction reader, these were all new-to-me stories that I thought I might appreciate. A selection of fifties SF, all of which are dark and strange and rebellious, and examine the social and political pressures that are oftenplaced on women’s biology and sexuality. (Thanks to Joachim for suggesting and sharing the Kit Reed story with me!)

“Survival Ship” (1951) by Judith Merril, read from Feminist Philosophy and Science Fiction: Utopias and Dystopias (2007) ed. by Judith A. Little

“It was right– it was essential– for the captain to wake up first. If any of the men had showed superior recuperative powers, it could be bad.”

A high speed starship heads for Sirius, but the identities of the famous crew are anonymous to the public. After the initial acceleration and hypnosuspension, the crew awakens to tend the ship, but the divisions of labor seem strained, yet unexplained.

Aside from the drama of cramped-quarters conflict, the basic incentive behind pioneer starship stories and their ilk is utopian in nature: to fantasize about a reboot moment for dwindling human civilization. But what is often either neglected (or glorified in a “last-man-on-earth;she-has-to-do-me-now” scenario) in these stories is the unquestioned expectation of female enlistees on these ships to make their bodies and lives available for sexual reproduction, pregnancy, childbearing, and child-raising. Merril, being an old-fashioned kind of feminist, doesn’t exactly refute this presumed state of biological nature so much as embrace and empower it, and then turn the sexual pressure back on men by designing a pioneer ship crewed by “The Twenty and the Four”: twenty women and four oh, so lucky (eh? nudge-and-wink with me, guys) men, with nontraditional family systems on the horizon.

This story could perhaps be too quickly interpreted as a feminist utopia–though I’m sure the concept of polyamorous sex on a less competitive playing field tented many a pant among 1951 heterosexual male SF mag readers, too–but there’s an oppressive strain that lies beneath the entire storyline. All within the eight short pages of this story, as evidenced by the language of the narrative, the interactions between women characters, and the internal workings of the captain, the four men are, in various ways, condescended to, infantilized, and disenfranchised. It may be my more modern sensibilities talking, but this seems likely to be the start of a dystopic vision for all parties involved–sexual determinism turned on its head is still sexual determinism, after all– a lesson for all that biology should never be destiny.

This is 1951, but, to its detriment, “Survival Ship” bluntly reveals its “Twenty and Four” mystery in the final paragraphs via the captain’s corny dinner speech, when a more oblique conclusion could have achieved a resonant, (and less cheesy) statement. Still, the story supplies us with an unfinished thought-experiment that begs for expansion. I would like to see what happens next.

“Of course. Any girl with spirit would.”

A young Marine visits a robot therapist in order to resolve her issues with mandated, inter-service sex. The robot therapist, quietly malfunctioning across from her, gives reactionary advice that only a proper soldier would understand.

Given St. Clair’s history of support for nonviolent movements, including her involvement with Wiccans and Quakers (Wikipedia said), it’s likely this story was intended to begin and end as a dark satire of military values, soldier obedience, and (to any outsider) the eyebrow-raising and counter-intuitive rivalries between the US armed forces. But there’s that issue again: the expectation of women to make their bodies available, this time “to relieve inter-service tension,” and poor Major Briggs (Twin Peaks inspiration? Nah.) just can’t figure out why she can’t get herself going for these assigned sex appointments without a double-dose of sexy hormones. It never occurs to her to question the system; she believes something is wrong with her.

The real problem is obvious to the robot therapist, but its malfunctioning state–the short in its chest being a symbol of a heart broken by the constant warring violence– manipulates the soldier into murdering her next Air Force john, hoping to spark an inter-service war that blows the entire military to hell.

As blunt as the premise and ending seem, it took me a couple of readings to grasp St. Clair’s full intentions for this story. The absurdity of the situation removes several of layers rationality, and it appears at first read to be just a bizarre throwing together of absurd concepts. However, that absurdity is dressed in a deadpan and matter-of-fact sense of humor, which is often misinterpreted in women’s writing, and this short story is very tongue-in-cheek. While St. Clair’s primary target is the military mindset, the commentary on the political control of female sexuality, especially female accountability for sexual problems, isn’t just some imaginary, whimsical SF idea.

“The main thing, sweetie, is to be a good girl.”

A mother-and-daughter road trip through the southern heartland of America brings them to an extra friendly town where the townsfolk want to help cure the mother of her “problem” and introduce the daughter to their unorthodox traditions.

Early on, the story almost feels like an abstract piece when we first encounter an ill woman lying on a mattress in the park, then overhear a guarded conversation between a newlywed woman and a girlish admirer, followed by disjointed public discussions about medication that take on an irrational quality. But after those initial dissonant moments pass, the reality of the town takes shape within the fog and things start to feel properly sinister within a familiar, suffocating small town context. Along with the townsfolk’s belief that they know what’s best for the ill (while likely keeping the mother ill with all of their medicinal troubleshooting), and the powerlessness of the daughter to get her mother to some real medical help, it also becomes apparent that the townsfolk have a vested interest in the daughter’s virginity. After she fails to escape the oppressive small town atmosphere, the story ends with the daughter coerced into joining a field full of young women standing on boxes and holding strings that lead to the edges of the field. What feels nightmarish and sinister is simply a symbolic illustration of a common and recognizable social custom: women’s virginity put on a pedestal, with strings attached to men’s desires.

The relative obscurity of this story surprises me since it employs a Tiptree-like sophisticated and nightmarish social extrapolation in order to vividly articulate an unquestioned social truth, but written an entire decade before Tiptree’s stories were being published. This was my first experience with Kit Reed’s work and I will likely return for more.