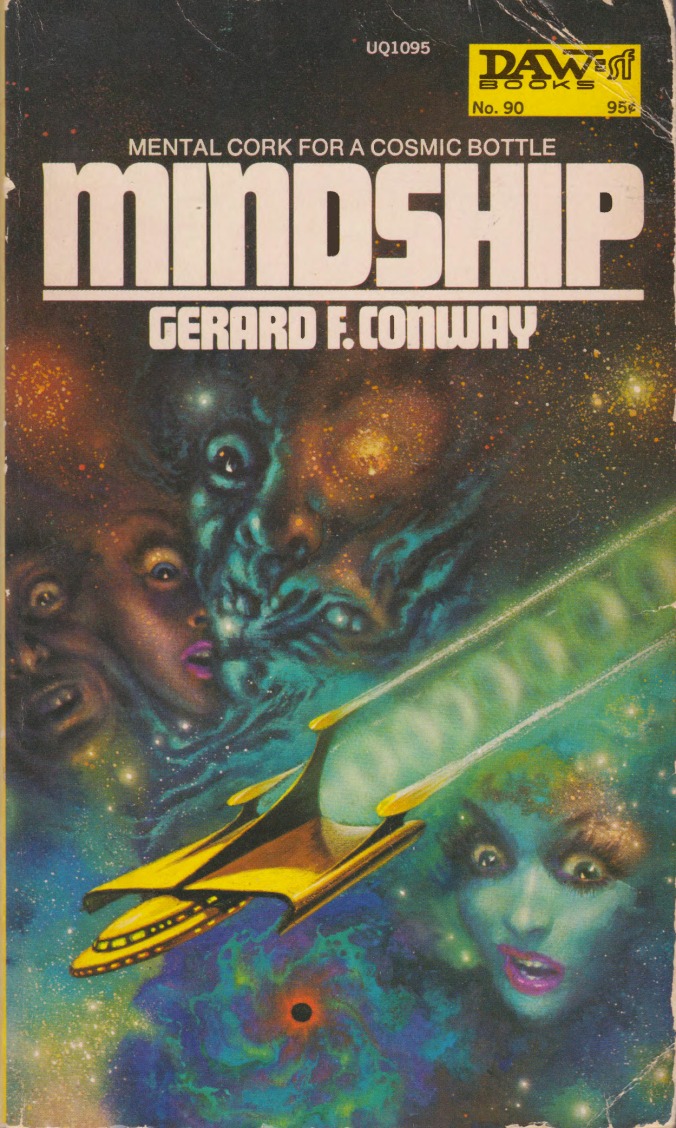 “The only truth is what happens, in plain and simple reality. I’ve seen the inside of too many minds to think any man’s intentions can be good. We’re evil inside ourselves Kilgarin. We’re sick and foul and filthy. The only ones who come close to being pure are those too stupid to be anything else” (72).

Back in 2016 I read Universe 1, ed. Terry Carr (1971) and was pleasantly surprised by Gerard F. Conway’s short story “Mindship” (1971) about telepathic (“sensitive”) “corks” who calm the minds of the spaceship crews whose psychic powers run interstellar “engines.” This story forms the prologue of Conway’s novel continuation. In an odd way, the novel reinterprets the original short story and adds an additional level of mystery (it wasn’t an accidental death, it was a murder!) to its straightforward plot.

As I mentioned in my review of the short story, I tend to avoid the SF trope of psychic powers unless there is a conscious attempt to focus on character development and inner turmoil. Conway’s novel is somewhat successful in this department but fails to create momentum in the story.

The year is 3146 and great mindships traverse the galaxy. A young “cork” is recruited by the Captain of the Charter after a disaster. Unsurprisingly, the job of the cork, sifting and soothing the thoughts of Charter‘s crew powering the hyperdrives, is the most stressful job on the ship—often resulting in psychotic breakdowns. The young cork dies as well… and there are shades of intent on the part of the Captain. His brother Kilgarin, a moody/uncomfortable sort of character who runs a brothel, takes up his brother’s contract in order to solve his murder (54). His own past as a cork haunts him. Searching for a purpose, he latches onto his quest—despite the disquieting truth that he barely knew his brother (60) and in his youth desired to kill him (53).

Kilgarin immediately feels that Charter does not seem to be a normal ship. First, an “aura of violence” permeates the corridors and its crew (76) and the Captain’s mind seems to be blocked off, perhaps facilitated by the Captain’s officers, hiding the secret that Kilgarin seeks. The Charter voyages from planet to planet and additional clues are revealed and dangers encountered.

Conway depicts space as a landscape of psychological trauma and broken men and women. Even the buildings on planets, economically held back by the monopoly of The Company (that controls space travel), are afflicted: “Yet the building was in decay: a spiritual decay” (56). Inhabitants, desperate for jobs that tend to go to off-worlders in the employ of The Company, struggle to make ends meet. Even the bodies of off-worlders and the landscapes they dwell in exude decay: Conway describes lips as cracked and raw, planets grey and bleak, noses drip mucus, hands shake, arms are laced with veins. Other sensitives are plagued by their abilities: some “were constantly ‘on,’ whose minds were in perpetual reception of thoughts and emotions of people around them’ (62). Those sensitives who refused to read the minds of others  tend to “decay mentally” (77). Everyone, as a coping mechanism, is possessed by their quests and vices…..

Even wealthy planets are moral wastelands–the pleasure hub of Rylon, is “a literal explosion of the perverse” (88). Theater actors perform with their intelligence removed, programmed (91)… Cats are modified (poorly) to walk upright in pathetic imitation of their human owners.

Despite the intensity of the original short story, the novel version does not maintain sufficient momentum. As Kilgarin and his crew move from port to port to port, Kilgarin drinks and drinks and drinks, and then mopes and mopes and mopes, and only occasionally uncovers a clue to his brother’s possible murder (this element of the story is almost tangential yet drives the plot forward). Events swirl around the Charter—rebellion against The Company, etc.—but Kilgarin tends to observe the surroundings rather than influence them.

Recommended only for DAW books completists or fans/scholars of telepathy in SF.