1. Ursula K. Le Guin’s novella, The Word for World is Forest, first appeared in Harlan Ellison’s Again, Dangerous Visions (1972) anthology before a stand-alone publication. I seem to remember reading it as a kid…. But…. the memories are vague.

2. Cordwainer Smith and I have never really seen eye to eye (I wanted to rhyme). I’m all for acquiring more of his collections just in case!

The Richard Powers cover is one of his best of the 60s.

4. John Varley, another author whom I’ve yet to read despite owning numerous of his collections and novels…. Millennium (1983) seems, well, suspicious? Time travel, airplanes, dystopic futures, love affairs across time. We shall see!

Note: the images are hi-res scans. Click to enlarge.

As always, comments and tangents are welcome!

(Richard Powers’ cover for the 1976 edition)

From the back cover: “THEIR TRIBAL DREAMS HAD BECOME AN ALIEN NIGHTMARE.

The planet Athshe was a paradise whose people were blessed with a mystical awareness of existence. Then the conquerors arrived and began to rape, enslave and kill the humans without a flicker of humanity. The Athsheans were unskilled in the ways of war, and without weapons. But the gentle tribesmen possessed strange powers over their dreams. And the alien conquerors had taught them how to hate…”

From the back cover: “CORDWAINER SMITH had a vision of the future that created a legend in his lifetime—the universe of the instrumentality of Man, or Norstrilia, of the Underpeople and their heroine C’Mell, of the Scanners—a vision shot through with the truth of poetry and prophecy.

This classic collection includes such famous stories as “The Lady Who Sailed The Soul,” “The Game of Rat and Dragon,” Alpha Ralpha Boulevard,” and “Scanners Live in Vain,”—landmarks of imaginative writing.

Read them and in truth

YOU WILL NEVER BE THE SAME.”

From the back cover: “A purple vapor, far deadlier than any bomb or gas invented by man’s genius, passes over the world and kills every living being but one. One person is singled out for survival, and to meet the most bizarre destiny ever conceived by any mind–human or divine.” 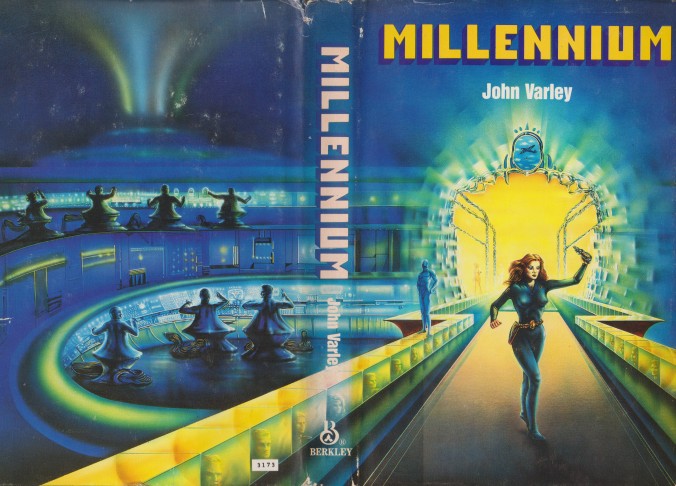 From the inside flap: “To Louise Baltimore and her fellow citizens of Earth in the 99th century, life offers bleak prospects. The world is on its deathbed, dying from the accumulated poisons of one too many wars. Suicide is common, since convincing reasons for hanging around for the planet’s final gasps are few.

But there is a plan. Directed by the Big Computer, a group of people are engaged in an all-out effort to create a future for humanity; if not there, then on another planet; if not in their time, then in another. Louise is one of these people.

Louise is the head of a time travel team which uses The Gate to enter the past. There they kidnap people, but not just anyone. Louise must choose only those who are destined to die in their time, passengers of airplanes of the twentieth century that are about to crash, or those involved in similar disasters. They will be rescued and brought to Louise’s time, and placed in suspended animation awaiting the moment when a great space/time ship will carry them to a distant planet in an unthinkably distant future. There, these folks, dead in their own time, will give new life to the human race.

The enterprise is risky. In order not to disturb the delicate fabric of time, no shred of evidence must be left, no clue to what happened be allowed to exist. Bloody remains, dismembered bodies, personal effects—all prefabricated by Louise’s people—are placed in the wrecks to satisfy the curious authorities. For if something should happen to change the flow of time, the timequake that would result could destroy all hope of human survival.

But something has gone wrong. Two stunner guns are lost, one in 1955 and the other in 1980. Three members of Louise’s team have already died trying to retrieve them. And now it seems that one of the weapons will fall into the hands of a crash investigator named Bill Smith. And Smith is smart enough to figure out something happened—and do something about it. Louise must attempt to stop him from changing history. It is a mission of enormous danger. One false move, one tiny mistake, may cause instant disaster. And things don’t get any easier when Louise finds herself falling love with this twentieth-century meddler.”