1. Years ago I read and reviewed Suzette Haden Elgin’s provocative At the Seventh Level (1972)–I praised the use of linguistics, the formulation of societal ideologies, and critiqued the ramshackle plot and Orientalism. Native Tongue (1984) is supposedly her strongest work. I look forward to reading it.

2. I have yet to ready any of Greg Bear’s work. This late 70s novel was signed so I snatched it up. I don’t track down signed copies–all the ones I owned were accidentally mislabeled or inexpensive volumes I wanted anyway. Bear’s signature joins the ranks of Christopher Priest, D. G. Compton, Karen Joy Fowler, and Norman Spinrad.

Hegira itself draws inspiration from the Ringworld and Riverworld-style SF novel.

3. My Tanith Lee collection grows and grows. This one more fantasy than SF (although SF elements crop up at the end). In case you missed it, I reviewed Don’t Bite the Sun (1976) recently and procured a copy of Electric Forest (1979).

4. Mildred Clingerman was regularly featured in The Magazine of Fantasy and Science Fiction in the 50s and early 60s. I have finally found an inexpensive copy of her only collection published during her life (an omnibus edition with never before seen stories was recently self-published by her descendants). As it’s a Ballantine Books volume, it has a wonderful Powers cover.

This is a novel of the cold war between the sexes as it developed in the centuries that followed. It is a highly controversial novel, sure to arouse charged emotions in readers of both sexes. Suzette Haden Elgin, science fiction author and professor of linguistics, combines her talents to tell a vivid story of people in a future society where interplanetary trade had made language-study a necessity–and thereby handed the so-called ‘weaker’ sex a weapon for liberation… if they dared use it.”

From the back cover: “Almost three-quarters of a million miles around, Hegira had, against all the laws of physics, Earth-normal gravity; its different races had a common history, graven on giant Obelisks that rose out of sight to the sky, beyond men’s powers to reach and read. As knowledge advanced, Hegira grew more impossible to explain or understand.

The strange trio who set off in search of the legendary Land Where Night Is a River–a disguise soldier fleeing the wrath of those his army had oppressed, a bewildered religious fanatic, and a slave who held a secret he dared not think of–knew little of their planet’s oddities and cared less… until Hegira’s changeless mysteries began to alter, threatening the existence of all life on its surface.”

From the back cover: “She woke from a sleep of countless years, reborn form the heard of a raging volcano. Her baby was a masterpiece all men desired, her face a monstrosity that must go masked.

Warrior, witch, goddess and slave, she was doomed to travel through a world of barbaric splendor, helped and betrayed by her lovers, searching for escape from the taint of her forgotten race, and the malice of the demon that haunted her.” 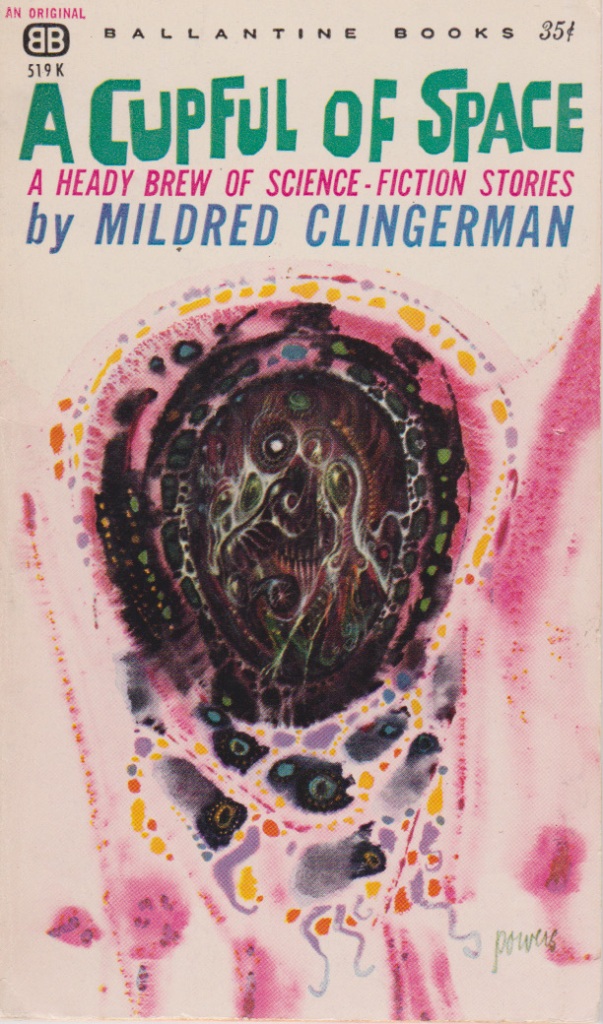 (Richard Powers’ cover for the 1961 edition)

From the back cover: “RECIPE: Recommended

A few well-chosen characters—human or otherwise

A sprinkle of suspense

A dash of suspense

A dash of danger

A pinch of peculiarity

One tablespoon of terror

Blend the above with the bygone and beyond, sifting in the supernatural. Mix at the high speed of magic, then season to the taste of science-fiction lovers.

Now, cook over a low flame of fantasy and allow to cook.

YIELDS: An measurable serving of pleasure in A CUPFUL OF SPACE.”

For adventures in cover art consult the INDEX