1. As a historian, I am particularly fascinated by future histories—stories or novels chronologically organized to convey the historical scope of a society’s evolution. Mike Resnick, a new author to me, presents a future history in the form of linked original short stories. The format reminds me of Michael Bishop’s Catacomb Years (1979), although the stories in the latter volume were previously published.

Barry N. Malzberg also tried his hand at a future history (albeit, a distinctly Malzbergian take) in the underrated Universe Day (1971).

2. I’ve read extensively about Mary Gentle but I haven’t picked up one of her novels–until now. I’d love to know your thoughts on this one.

3. Jayge Carr is best known for Leviathan’s Deep (1979) which I bought a few years back but haven’t read. Here’s a lesser known work—it only received one printing—in a trilogy.

4. And finally, another complete unknown…. SF Encyclopedia describes Robert Reed’s first novel, The Leeshore (1987), as “a tale which combines adventure-sf plotting (a pair of twins, the sole humans left on the eponymous water-covered colony planet, must guide a task force in pursuit of the Computer-worshiping zealots who have killed everyone else) with an almost mystical sense for the genius of place, the intricacies of self-hood.”

Count me intrigued! I’m all for unusual planets…..

As always, let me know what you think of the books and covers in the comments!

From the back cover: “THE GALAXY WAS MAN’S FOR THE TAKING—BUT KEEPING IT WAS ANOTHER MATTER…

On an insignificant planet far from the heart of the galaxy. Man gazed at the stars and dreamed of conquest. And with the passing millennia, Man’s ships began to roam the spaceways, making that dream a reality. Claiming star system after star system, Man settled peacefully on hospitable places like the fifth planet of the Sirius system and fought deadly wars over territories like the water world of Gamma Leporis IV. Almost too soon, Man was acknowledged to be the dominant species in the galaxy—and that was when the glorious dream changed into nightmare…” 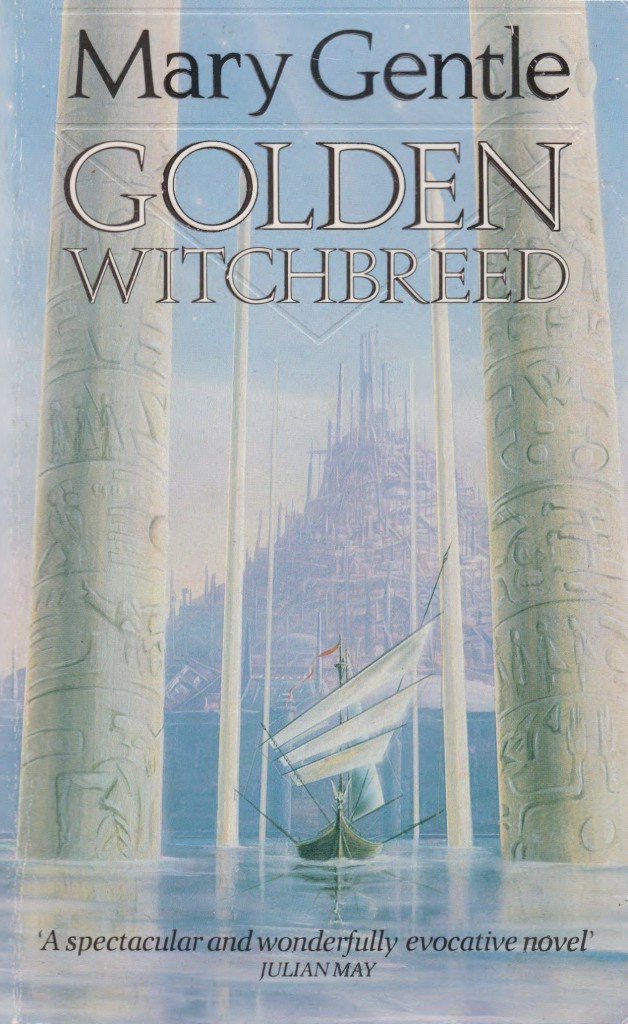 (Uncredited cover for the 1988 edition)

From the back cover: “The distant world of Orthe is littered with the spectacular remnants of its once great civilization. Now the Ortheans have deliberately turned away from the technology which nearly destroyed them—and from anything that links them with their past.

To Orthe comes Lynne de Lisle Christie, envoy from Earth. Her assignment: win the confidence of the planet’s leaders. All too quickly, however, she finds herself at the centre of a conflict which threatens to explode into war—and which puts her own life in peril

GOLDEN WITCHBREED is a brilliant, epic adventure of fierce imagination.” 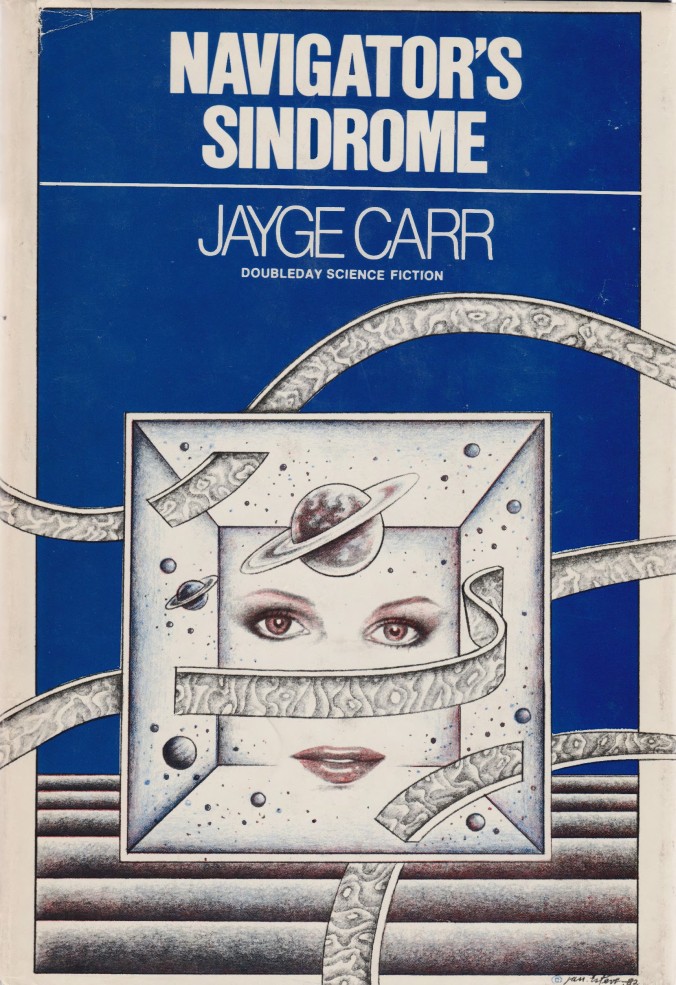 From the inside flap: “The planet Rebelais is a world unlike any other in the  galaxy—wilder, stranger, and infinitely more dangerous. The masters of Rabelais maintain their cruel, perverse dominance by an extraordinarily complex system of contractual arrangements which are as binding on the subject race as they are incomprehensible to the unfortunate travelers whose star-course intersects the planet’s co-ordinates.

One any other world, for instance, Jael’s black Navigator uniform would have protected her. And on any other world, Freighter-master Hannibal Reis wouldn’t have to hide his real motives for staying on the evil planet. But on Rabelais, Lord Golden Singh makes the rules, and the Golden Rule is Lord Golden’s pleasure. He’s manipulated the obscure laws into a protective screen of legitimacy, but–though he doesn’t know it—there are powers in the galaxy much greater than his, powers that become very angry when he tries to make offworlder Jael the victim of his self-legislated self-indulgence…” 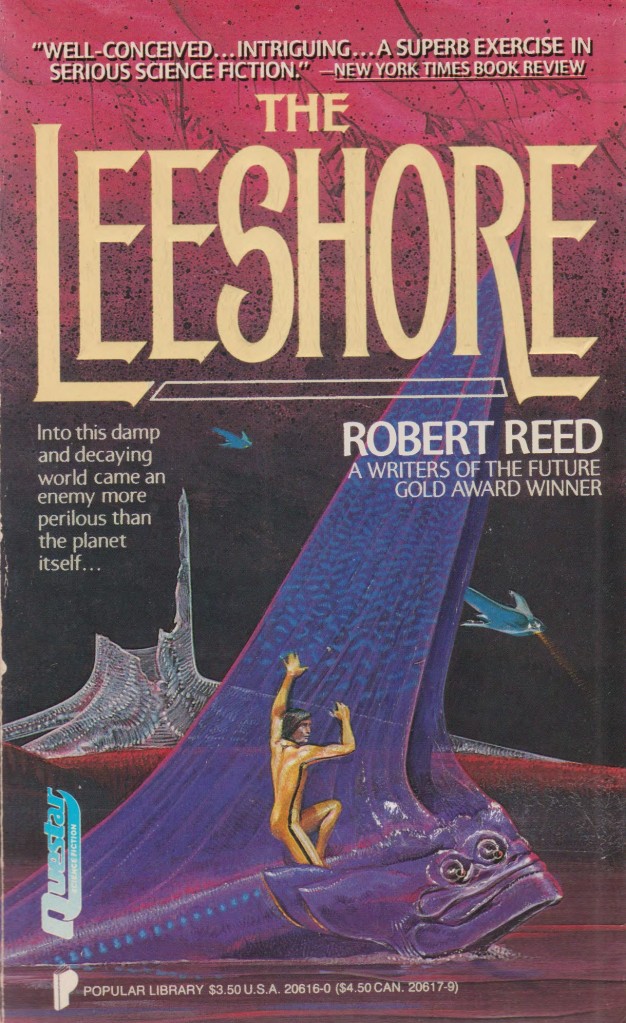 (Wayne Barlowe’s cover for the 1988 edition)

From the back cover: “THEY THOUGHT THEY KNEW ALL THERE WAS TO KNOW ABOUT DANGER… UNTIL TWO ARMIES BROUGHT WAR TO THEIR WORLD.

Abitibi and Jellico were the only humans to be born on the Leeshore. To them, it was home. But the Islanders hated the watery planet. Beneath its canopy of airborne plants they felt suffocated by the stench of decay and blinded by the eternal darkness. Their only hope lay in rescue.

Yet when the starships finally appeared, they carried men whose goals were not to liberate, but to destroy. Rivals in struggle for supremacy that had begun on another world, the Alteretics and the Earthmen were preparing for the ultimate confrontation. Any they would use any weapon–or anyone–to win. Soon, in a var they can neither understand nor envision, Abitibi and jellico will be forced to choose sides. For the final battle will be fought on… THE LEESHORE.”