This collection contains the third post in a loose series on SF short stories that are critical in some capacity of space agencies, astronauts, and the culture which produced them. After reading today’s installment, I decided to review the entire collection!

Previously: Edmond Hamilton’s “What’s It Like Out There?” (1952) in the December 1952 issue of Thrilling Wonder Stories, ed. Samuel Hines. You can read the story online here. 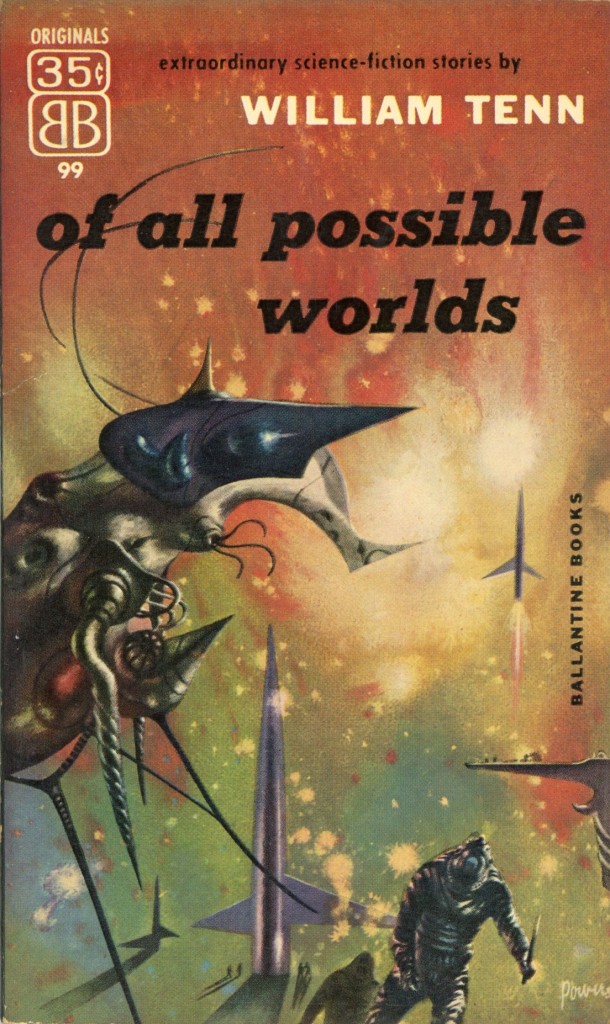 Richard Powers’ cover for the 1955 edition

In the early days of my website, I reviewed two volumes by William Tenn–his sole novel Of Men and Monsters (1968) and his collection The Human Angle (1956). Of All Possible Worlds (1955) is his first published collection. The presence of “Down Among the Dead Men” (1954), “The Liberation of Earth” (1953), and “The Custodian” (1953) make this a must purchase (despite the handful of duds that drag down the overall rating) for fans of polished 50s satires in wrecked future worlds. Tenn’s narrators regurgitate the propaganda of their times to cover-up their traumas and memories.

Publication Note: The UK editions (Michael Joseph and Mayflower) contain slightly different contents. Check the isfdb.org listing for more details. I read the US 1960 edition with the cover by Blanchard (below).

“Down Among the Dead Men” (1954), 5/5 (Masterpiece): Our spacer narrator approaches a junkyard, memories of cataclysmic war  against insectoid aliens assault him… He’s presented with slogans of the war effort that jar him into the present and buoy his spirits: “DON’T WASTE WASTE […] WHATEVER IS MAIMED CAN BE RECLAIMED” and “GARBAGE IS OUR BIGGEST NATURAL RESOURCE” (14). He lifts his head with new resolve, happy with the presence of pregnant women (new soldiers!), happy with his own sacrifice (his arm, reclaimed). But a new challenge awaits—he must meet a new version of the  “zombies” that will form part of his team of soldiers. Or should I say, “soldier surrogates” (22) fashioned from the plasma of dead soldiers in four models based on long-dead war heroes!

As with “The Liberation of Earth” (1953) later in the collection, Tenn’s narrators are entirely caught up in the propaganda of their moment. And of course, far deeper traumas and memories bubble beneath the surface. This is terrifying world that the narrator inhabits–children learn war strategy from birth, women are perpetually pregnant with new soldiers, waves and waves of men are sent out to the insectoid grinder, and simulacra of men do odd jobs oblivious to the terror of battle.

“Me, Myself, and I” (1947), 2/5 (Bad): A delusional professor develops a time machine and needs a test victim. The small-time criminal McCarthy, obsessed with his comic books, is the perfect man no one will miss if the time machine experiment goes wrong. And it does, but in ways that are not foreseen or seen as “time” is a slippery business. As with “Flirgleflip” later in the collection, Tenn’s professors are more oblivious, corny, and perpetually lodged in a windowless ivory tower than “mad”…

The story is silly but slight.

“The Liberation of Earth” (1953), 5/5 (Near Masterpiece): The second best story in the collection! A Korean War parable, “The Liberation of Earth” tells of two alien powers (the Dendi and the Troxxt) engaged in an interstellar war. Earth, a cosmic backwater, is repeatedly “liberated” and simultaneously destroyed by repeated waves of occupation and the scars of alien weapons. The tale is told as if we, the readers, are learning an oral history from one of Earth’s few survivors–who spend their time munching succulent roots (57) and fighting giant rabbits in order to consume each other’s dead (75). The most disturbing elements involve the effect of alien propaganda—the narrator seems to believe each successive inundation of maxims and declarations spewed by the new occupier. And that the survivors, who scurry from puddle to puddle, and listen in horror to Earth’s dying geological spasms believe that they are “as thoroughly liberated as it is possible for a race and a planet to be” (75).

Tenn’s best when his tales involve far future locals. A must read for fans of anti-war SF and the intersection of orality and collective memory….

“Everybody Loves Irving Bommer” (1951), 2/5 (Bad): Like “The Tenants” below, this particular story does not rise above the bad “gimmick” variety. Irving Bommer spends his days wistfully following girls–and without ability to find love himself [i.e. not be a creep] falls victim for a gypsy selling love potions (cue bad attempts at dialect). And he buys a bottle, and doubting its efficacy accidentally applies too much. At first he’s an asset at work selling kitchen gadgets in a department store to the adoring female masses…. but a more sinister end awaits, under a smoosh of adoring flesh.

Tenn’s attempt at a parable might be a warning about the emptiness of physical attraction as a sole metric of a relationship. This is one of those stories where a deeper argument about its aims and comments on empty male desire might be made, if I enjoyed it more. Avoid as you would a real love potion.

“Flirgleflip” (variant title: “The Remarkable Flirgleflip”) (1950), 3/5 (Average): In some “intermediate civilization” (99) Terton, cue “Tenn academic type,” fixates on his paper on “Gillian Origins of Late Pegis Flirg-Patterns” (96). A colleague interrupt his intellectual dreamland with a revelation about The Temporal Embassy, a time-travel organization that periodically time-travels to improve the present. Apparently, Terton lives at the point in time where “we send nobody into the past; we receive orders, but give none of our own” (99). And his colleague’s scientific discoveries related to time travel might create a future incursion to prevent his research from happening!

“The Tenants” (1954), 2/5 (Bad): Sydney Blake receives word from his secretary that two unusual “men” seek to rent a section of an undesirable office building. Initially ecstatic, Sydney’s concern grows due  to their unusual  interchangeable names (Tohu and Bohu), unusual stature, and desire to rent the thirteenth floor which the building does not actually have. The story itself takes on horror-esque tones as the obvious mystery of the thirteenth floor becomes apparent…

“The Custodian” (1953), 4/5 (Good): Earth, 2190. Earth Society has bifurcated as a supernova threatens to destroy the planet. The Affirmers believe in subsuming everything to the goal of transporting Earth’s population off planet. Children are assigned to “Extra Work for Extra Survival Groups” where they paint numbers on packing crates (141). The Custodians wish to die on Earth surrounded by the objects of humanity’s past greatness. What is life without art? What is life without a physical connection to our pasts? The Affirmers assume power—and the narrator, a Custodian, is granted his wish to die alone on Earth.  All other Custodians are carted off by The Affirmers. But a discovery will call into question his drastic choice.

Tenn takes the middle ground between the entirely utilitarian and the entirely aesthetic. An exploration of the power of place in crafting who we are as a people. Recommended.

Enric’s cover for the 1963 edition 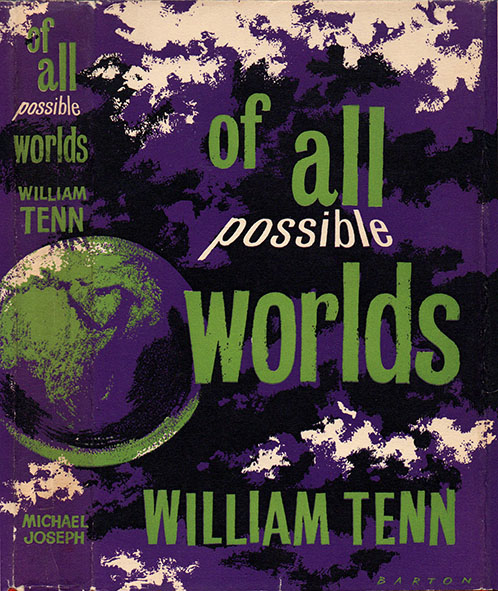 Richard Barton’s cover for the 1956 edition 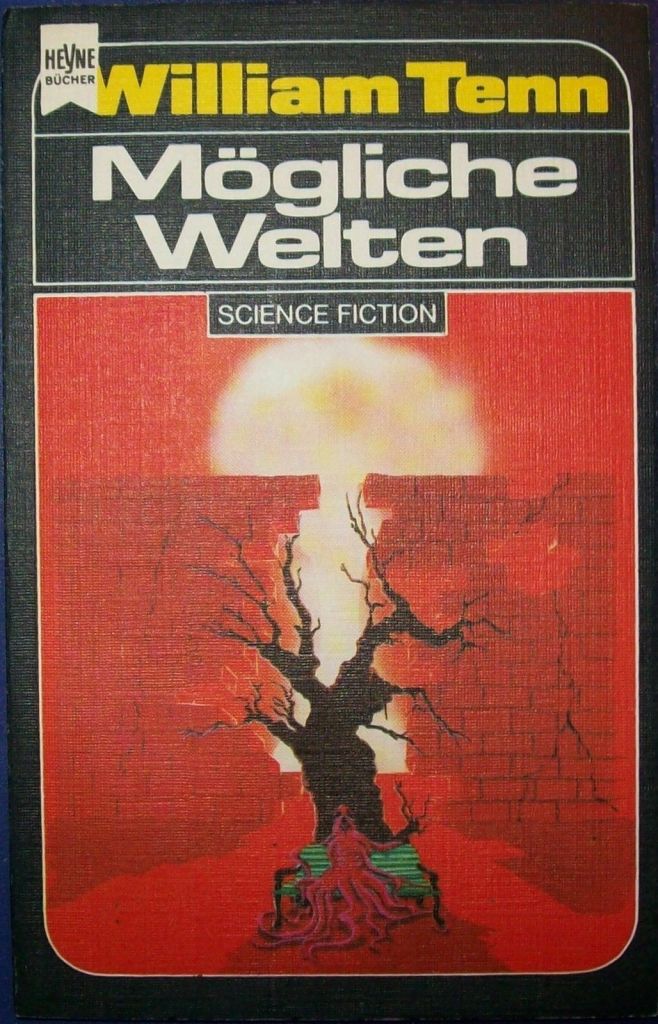 Blanchard’s cover for the 1960 edition