A while back I slogged through Philip José Farmer’s dismal To Your Scattered Bodies Go (1971) (the worst novel ever to win the Hugo Award?) and all the increasingly terrible sequels and made a solemn vow to wait a few years before I returned to his extensive oeuvre — so, against my better judgement I picked up a copy of  Traitor to the Living (1973).  I don’t have high hopes (but I love the cover!).  I hope my two dollars were well spent.

Malzberg is shaping into my “under read/unjustly forgotten author of the year” whom I’ll showcase.  Last year’s winner was the brilliant D. G. Compton (see INDEX for reviews).  Fresh off Conversations (1975) and In The Enclosure (1973) I picked up a copy of Guernica Night (1975).  I can’t wait!

Harold Mead’s The Bright Phoenix (1955) is yet another against the oppressive state à la Orwell’s 1984… But, I’ve found that the premise generally holds up despite frequent re-interpretations…

Greenfield’s Waters of Death (1967) should be avoided — at all cost.  I’ve already written a scathing review (rant).

From the back cover, “Medium… A heartwarming machine — designed to provide a connection with the dead.  Now all the world could reach their loved ones — at a prise.  Anything that emotionally loaded and carrying that kind of price tac could be a powerful weapon.  But no one, not even the inventor, could guess at how terrible that price might become.”

From the inside flap, “A rash of suicides has sent shock waves through a tightly organized society that officially frowns on such an act but privately makes it unavoidable.  How else could people endure in a world carefully calculated to rob its citizens of self-respect and dignity?  One man struggles against the overpowering temptation to take his own life, because he realizes that he must survive or else give the strange unseen rulers final victory.  The characters in this extraordinary novel of the future share a host of psychiatric disturbances.  One is haunted by strange visions in the night; another can reach sexual climax only in the confines of an old jalopy; others share schizophrenic fantasies that give frightening insight into the nature of their anguish.” 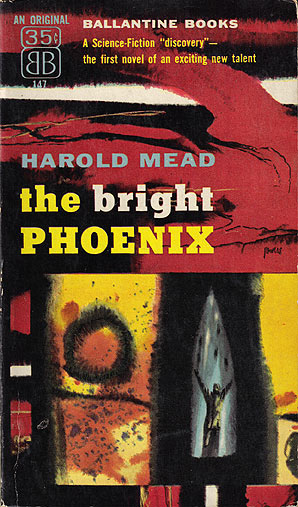 (Richard Powers’ cover for the 1956 edition)

From the back flap, “[The] Bright Phoenix is the story of a “perfect” state, founded on worship of the spirit of Man and dedicated to the mission of resettling the devastated areas of the world.  Officers, Workers, Colonists — everyone believed in the State.  Everyone but one man.  This is his story — of the Colony he led to the Island… of the primitive race he found there… and of the desperate plan to escape from a Utopia that had become a living hell.”

From the back cover, “The Menace Below… The year was 2160 and a century-old threat to man’s survival was, finally, a nightmare of the past.  Rising to the challenge of Earth’s population explosion, science had developed vast undersea farms to produce food for teeming billions.  No one need starve; peace and plenty awaited all.  Or so it was thought.  One day Dr. Robert Wilde was brought to the Institute of Oceanography and confronted with the new nightmare on man’s horizon.  Starvation, in its wake war, the end of civilization, cannibalistic orgies… Only Dr. Robert Wilde could avert the planet’s destruction.  Because no one knew the seas as well as he — and the seas were dying…”