Although Robert Sheckley’s collection The People Trap (1968) does not approach the heights of Store of Infinity (1960), there are plenty of gems and the overall quality should compel any fan of satirical 50s/60s science fiction to find a copy.   Sheckley’s stories are characterized by delightful wit (despite serious themes such as the effects of colonization, technology, and nuclear disaster), surprising twist-endings, a penchant for intellectual mind-games (especially his 60s stories), and often hilariously hapless characters.

It is worth noting that three of the short stories — ‘The Necessary Thing’ (1955), ‘The Laxian Key’ (1954), and ‘Ghost V’ (1954) — are in a loosely connected sequence, about two rather unintelligent planet decontaminators, which reminded me of Stanislaw Lem’s Tales of Pirx the Pilot (1968) stories.  The first two concern a piece of technology the decontaminators don’t fully understand — with fantastic consequences.

By far the best short story in the collection is the linguistically themed Nebula Award Nominated ‘Shall We Have a Little Talk?’ (1965).  It encapsulates what Sheckley does best —  he explores a serious (and complicated) theme (colonialism) via a hilarious situation, in this case the inability to understand a constantly modulating language.

Sheckley’s two very Borgesian 60s short stories — ‘Redfern’s Labyrinth’ (1968) and ‘Dreamworld’ (1968) — will not appeal to all readers due to their nihilism + metafictional elements.  I found them to be deceivingly complex — despite their length — ruminations on labyrinths and the nature of reality.

Along with Store of Infinity, The People Trap is highly recommended.

‘The People Trap’ (1968) (20 pages) 4/5 (Good): Sheckley’s take on future overpopulation.  Participating in the Land Race Day was a national pastime and the reward, a plot of land in the barren west, is the ultimate goal.  All you have to do is win a race against thousands of others from a raised dais in Jersey City’s Glebe Park to the Land Office in Times Square.  Unfortunately the decrepit city of New York is filled with pitfalls.  The nature of the journey itself purposefully harkens back to the journey out west.  Sheckley ruefully interjects at the end: “It was as happy an ending as could be found in the latter half of the twenty-first century” (26).

‘The Victim from Space’ (1957) (18 pages) 4.5/5 (Good):  One of the many stories on the theme of first contact.  First contact commonly serves as a commentary on Europeans coming into contact with other regions of the globe.  An explorer named Hadwell, a writer of travel narratives of how romantic he wished his own voyages would be, comes across a society whose ultimate goal is to die via a spectacular and painful death.  Of course, he’s oblivious to the societal norms — for once it seems that his idealized romantic vision is coming true.

‘Shall We Have a Little Talk?’ (1965) (24 pages) 5/5 (Very Good): Rightfully nominated for the 1966 Nebula Award….  The best story in the collection — despite the thematic similarity to The Victim from Space it is easily the better story.  Jackson, who is paid large sums of money to voyage from planet to planet talking to aliens in order to eventually steal their land, arrives at a deceptively primitive planet.  Despite his sophisticated linguistic abilities, Jackson is never able to fully understand the the alien language.  He realizes that his presence has changed the very nature of the alien language — at a rate faster than he can keep up.

‘Restricted Area’ (1953) (17 pages) 3.25/5 (Average):  One of the weaker installments…  Scientists encounter an unusual planet with a large metal pillar, a complete lack of bacteria, and odd — and rather comical — animal lifeforms that lack any internal organs.  When the world’s light goes dim in the middle of the day and the animals stop their cavorting the planet’s artifice is revealed.

‘The Odor of Thought’ (1953) (12 pages) 3.25/5 (Average): An intriguing take on telepathy…  An interplanetary mail carrier crashes on a planet with eyeless and earless predatory animals. The mailman soon discovers that the animals are attracted or repulsed by his thoughts.  He must survive the vultures and panthers by creating alternating mental images until rescues arrives…

‘The Necessary Thing’ (1955) (12 pages) 4/5 (Good):  Two hapless planet decontaminators take on board a dubious device called a Configurator.  The Configurator configures whatever you ask it to.  Its incredible utility — and the limited space on the spaceship — means that other survival items will have to be left behind.  Unfortunately, the Configurator has rather human foibles and will only create one object from each category of objects (decided by itself).  But one metal plate to repair the spaceship’s hull will not be sufficient.  Nor will one fowl supply enough food….

‘Redfern’s Labyrinth’ (1968) (6 pages) 4.75/5 (Very Good):  Charles Angiers Redfern, who appears to be the author of a work entitled Labyrinth, receives two letters in the mail.  The first decries the very boredom inducing labyrinthine nature of Labyrinth.  The letter itself creates the same effect on Redfern as his own work had on the reader.  The second letter is the invitation to a real labyrinth.  Despite the letter’s apparent simplicity it too has its labyrinthine characteristics….  And clearly this labyrinth doesn’t actually exist.

‘Proof of the Pudding’ (1952) (8 pages) 3.25/5 (Average):  One man survives after a nuclear war.  He was the commander of the Western Hemisphere Defense who secreted himself aboard a fully-stocked spaceship and hid on the other side of the moon before the button was pushed.  When he returns to Earth he discovers that he gained almost godly powers — but, altogether less potent.  And then a woman walks out of his spaceship…  Is she a creation of his intellect?  But then again, when he tried to create a woman he could only summon a poor simulacra.

‘The Laxian Key’ (1954) (11 pages) 4/5 (Good):  Two planet decontaminators discover another piece of technology, a Megden Free Producer.  This device pulls energy from whatever source is nearby producing a dust-like food product consumed only by Megdens.  Unfortunately, only a few Megdens exist outside of their home planet.  And no one seems to have the necessary key to turn the machine off…

‘The Last Weapon’ (1953) (9 pages) 3/5 (Average): An unremarkable tale of three men in search of the hidden weapon stash of a long extinct Martian civilization.  Each want the greatest profits possible and conspire against each other.  And even when they’ve discovered piles and piles of sophisticated weaponry they can’t resist investigating The Last Weapon.

‘Fishing Season’ (1953) (14 pages) 4/5 (Good):  A surreal — and creepy — story about the mysterious disappearances.  Despite the police cordoning off the neighborhood, people still disappear from their houses.  And then there’s an old grandfather who can’t stop talking about fishing, and making fishing flies….

‘Diplomatic Immunity’ (1953) (20 pages) 4/5 (Good):  An alien ambassador arrives on Earth promising that his philosophy will convince all of mankind to join the galactic community — although they have little choice in the matter.  Unfortunately, the humans don’t want to read his philosophical tract and rather try to kill him in anyway possible.  But, the ambassador has a very helpful form of diplomatic immunity.  But mankind is resourceful in coming up with new ways of killing.

‘Ghost V’ (1954) (16 pages) 3/5 (Average):  An average story of a planet where mental phantasms — in this case the imaginary monsters of one’s youth — become manifest and terrifying.  A rather uninspired effort by Sheckley… 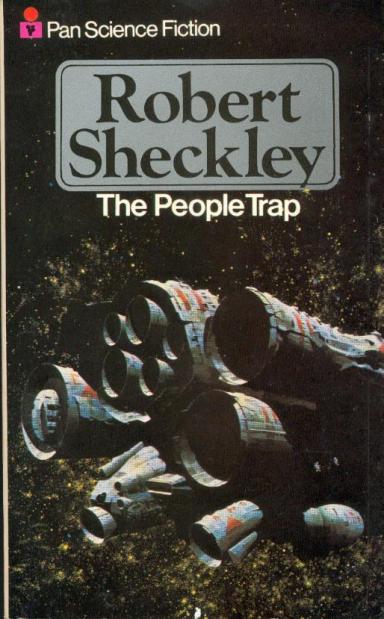