As is my wont, a wide range of authors, SF styles, and covers…. From Harlan Ellison’s collection with the first expanded and non-magazine publication of his famous  1970 Nebula Award-winning and Hugo-nominated novella “A Boy and His Dog” (1969) to Barbara Paul’s best-known SF novel.

And, how can you resist the gorgeous Karel Thole cover for Fast’s collection?  I know little about the author….

And finally, in my youth I was a cyberpunk fanatic and I adored (perhaps I was misguided, hah) Bruce Sterling’s Islands in the Net (1988).  At last I have his first novel in my hands!

As always, thoughts and comments are welcome! 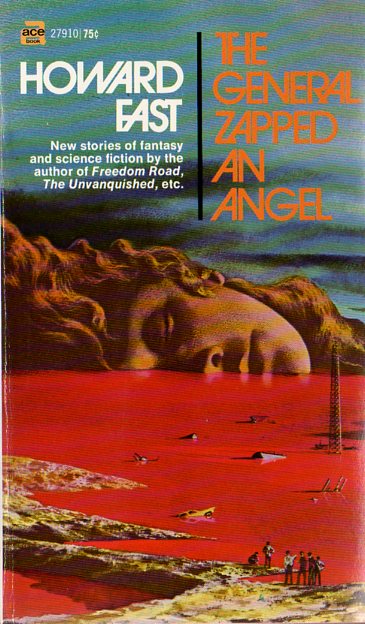 From the back cover: “HOWARD FAST, world-famous bestselling author, has been a reader and fan of science fiction all his life.  Here in this remarkable new book he presents nine of his own fine short stories of the fantastic and the science-fictional.

You will find some unforgettable tales here–stories of the unusual and strange in the world around us–tales like the little story of what happened when a twenty-foot long flying being was shot down over Indochina, like the man with the copy of tomorrow’s newspaper who tried to cash in on his advance information, like the strange results of the wounding of Mother Earth (See cover painting), like… but read them for yourself.

Louis Utermeyer writes: “In his new book, Howard Fast is as imaginative and as boldly inventive as ever.  I can’t think of a current book that is better reading, and what’s more important, rereading.”

From the back cover: “COME! SEE NULLAQUA! …AND DIE!

The entire habitable portion of Nullaqua lies at the bottom of an immense crater 70 miles deep, 500 miles across.  The rest of the planet is dead.

How quickly ca a person climb?  Two miles a day?  You would be two miles above sea level before you were even over the boulders at the foot of the NUllaquian crater.  After two days of climbed you would find it impossible to breathe.  The sky would turn black before you were halfway up The Cliffs.  After a month you would be climbing rockers undisturbed for four billion years.

And yet…something lives down there at the bottom of that ocean of dust.  Something cool and watchful.  No one talks about it on Nullaqua.

All this… and the crew of the dustwhaler Lunglance… make up this strange and memorable world.  For instance, you will never forget the winged woman Dalusa, or the hero of this novel, John Newhouse, who had the misfortune to fall in love with her…”

From the back cover: “WAR WORLD.  Lodon-Kamaria, a planet in a perpetual state of war.  No one in the Federation of United Worlds knew what the Lodonites and Kamarians were fighting about, nor, in the normal course of events, would anyone have cared.  But this was a world rich in alphidium, the most previous substance in the galaxy–and so, Lodon-Kamaria would have to become a member of the Federation.  And it was up to the Diplomatic Corps team, nicknamed the Anglo-Saxon Invaders, to do the recruiting.

It should have been an easy assignment.  Either make peace between the Lodonites and Kamarians, or figure our which side would be easier to deal with and see that it won the war.  That would have been the reasonable, rational approach.  But on a world where everyone is insane, reason just doesn’t apply…!”

4. The Beast that Shouted Love at the Heart of the World, Harlan Ellison (1969)

(Diane and Leo Dillon’s cover for the 1969 edition)

From the back cover: “FALL INTO THE BOTTOMLESS RABBIT HOLE WITH HARLAN ELLISON.

YOU WILL ENCOUNTER IN HIS UNSETTLING WORLD–

A terrifying paranoid delusion of a man whose vampirish friends feed on his slow charisma leak.

A James Bond Santa Claus who shoots it out with Ronald Reagan in the men’s room of a mental hospital.

The dizzying notion of a Jesus who has a strange, obsessive relationship with Promoetheus.

And a major new novella written especially for this volume, with the deceptively gentle title A BOY AND HIS DOG.”