This is the second post in a loose series on SF short stories that are critical in some capacity of space agencies, astronauts, and the culture which produced them.

Today: Edmond Hamilton’s “What’s It Like Out There?” (1952), 5/5 (Masterpiece). First appeared in the December 1952 issue of Thrilling Wonder Stories, ed. Samuel Hines. You can read the story online here.

Thank you “Friend of the Site” Jennifer Jodell for alerting me to the existence of this gem, our discussion, and for providing a summary  of  Damon Knight’s 1962 introduction. 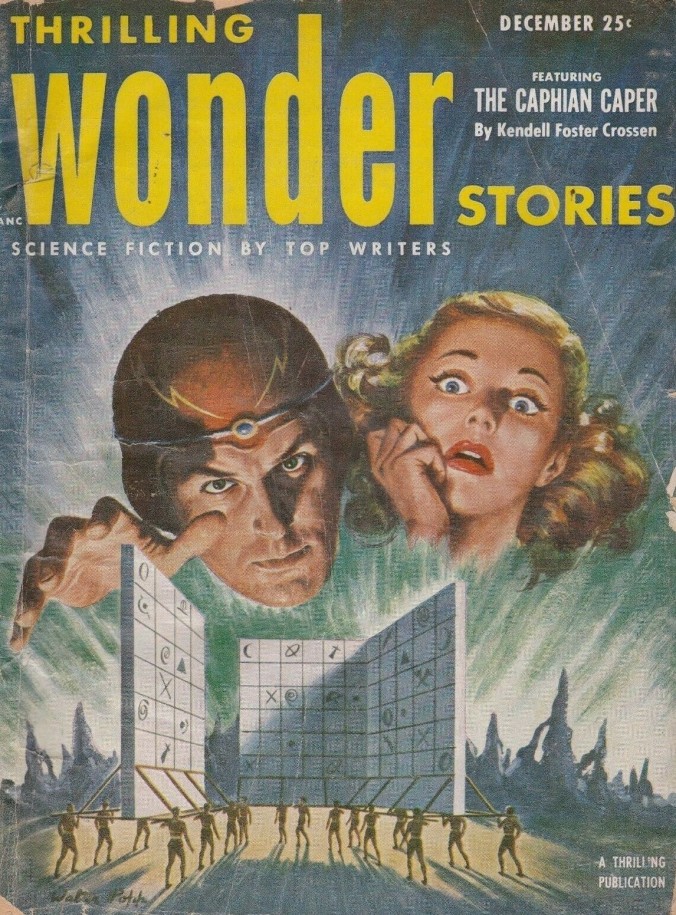 In the December 1952 issue of Thrilling Wonder Stories, Samuel Hines (the editor) presents “What’s It Like Out There?” as the culmination of Edmond Hamilton’s Phoenix-like evolution from a “primitive period” of writing extravagant pulps to “grown up” tales of “human emotion” (see full statement below).

Contrary to Hines’ narrative of authorial evolution, Damon Knight recounts in his introduction to A Century of Science Fiction (1962) that Hamilton wrote the story in 1933 but couldn’t find a publisher as it was “too gruesome, too horrible.” Found later by Leigh Brackett in a file, Hamilton rewrote the tale–and I’m glad he did!

Edmond Hamilton argues that returning spacemen will experience similar trauma to that of war veterans. And just like we glamorize war in media, the dangers of space travel (both physical and mental) are sanitized by gaudy pulp adventures. The story succeeds as a complex analysis of the tales we tell each other to obfuscate traumatic experiences and give comfort to those suffering loss.

The Second Mars mission, twenty rickety and cramped rockets, sets off to acquire cheap uranium. Suffering the internal organ-crushing terrors of takeoff, a rocket-splitting landing, Martian disease, isolation, and an abortive mutiny,  Sergeant Frank Haddon returns a different man. Like a veteran from a foreign war, Haddon must confront not only his own experiences but also the grieving relatives of his dead companions, who see him as the last connection to their loved ones.

This mission is told via flashbacks as Haddon travels from family to mourning family.  He tells the relatives of Joe Valinez that their son died without pain while “looking out the window at the stars” (12). In reality, due to Joe’s injuries he lay writhing in his hammock for hours and hours. At a dinner with two families, Haddon invents a cosmic accident that resulted in the death of their sons. Rather, the isolation and fear created a mutiny where their son’s likely shot each other in the dry red dust. He confesses later to Breck’s father that “it was just a story” (27). In each instance, the fabrication acts as a salve—the narrative people need to soldier on.

Haddon, struggling with the cognitive dissonance created by what he remembers and what he must vocalize, returns to his small Ohio hometown—and he realizes that his lived experience will only upset those who do not have the same memories. And he is compelled to perpetuate the same narrative that the First Mars expedition told the Second.

“Welcome home, Frank! What was it like out on Mars?” I said, “It was cold, Mr. Robinson. Awful cold.” “You should have been here last February!” he said. “Eighteen below—nearly a record” (28).

“What’s It Like Out There?” contains a brilliant structure that explores the cognitive dissonance I mentioned above. The question in the story’s title is asked repeatedly by Haddon’s adoring Earth-bound fans. Haddon answers in the same way, a small neutral comment that hints at his truly horrifying experience. The listener, unable to grasp the alienness of Mars, attempts to answer with an Earth-bound parallel that dodges understanding.

There is no wonder in “What’s It Like Out There?” While those on Earth project a heroic colonization of the unknown, Haddon strips all romanticism from his experience. I found the most fascinating moment of the story involved Haddon’s interactions with Jim’s fiancé, who preserves all of Jim’s pulp science fiction magazines. Haddon realizes that some of his companions might have held their experience on Mars in a more romantic light.

Alex Schomburg’s cover for the 1st edition of The Best From Startling Stories, ed. Samuel Mines (1953)

Don Maitz’s cover for the 1st edition of The Best of Edmond Hamilton, ed. Leigh Brackett (19771)

Uncredited cover for the 1st edition of What’s It Like Out There? and Other stories (1974)