And Aldiss’ most radical work (Barefoot in the Head (1969) might be the other choice for this distinction)?

In the past Budrys has not intrigued in the slightest—The Falling Torch (1959) was a bland alien invasion novel with a contemporary political message and Michaelmas (1976) turned a promising premise into a naive vision of absolute power wielded for absolute good.  But, short stories often give another avenue into an author’s oeuvre…

And more Lafferty—never pass them up in used bookstores, even if you do not appreciate his odd brand of SF, they are certainly worth a pretty penny…

Thoughts on this selection?

From the back cover: “The crystal world of J. G. Ballard where the white light of reason bends and breaks into every shade of fear… 12 chill splinters of unreality.”

From the back cover of the 1980 Avon edition: “DON’T EVEN TRY TO HIDE.  Mr. and Mrs. Mary have dismissed three of their servants.  Now G(ardener) is hiding out in a one-room bungalow nearby.  S(ecretary) is keeping vigil in the coach house.  C(hauffer) is holed up in the garage.  Each one owns a black and white reproduction of a 19th century painting that holds the key to something important.  Each one is observing Mr. and Mrs. Mary.

But in a world of spies, no one can escape the eyes of the watchful.  Caught in a prison without bars or locks, G, S, and C are in turn being watched, trapped in a mystery of time and space with no key, no answer—a mind-shattering infinity of watching and waiting…”

From the back cover: “Budrys’ Inferno is a choice selection of hair-raising moments in worlds where anything can happen and does… 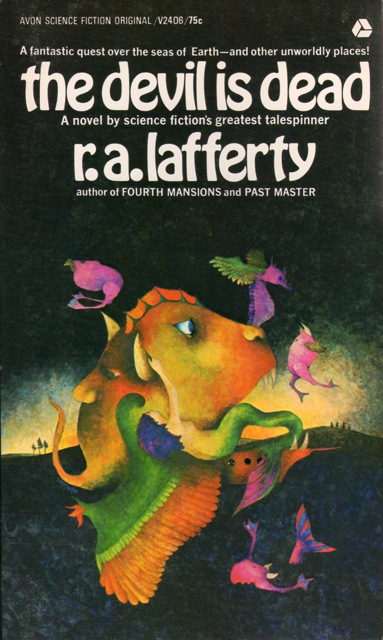 (Robert LoGrippo’s cover for the 1971 edition)

From the back cover: “R. A. Lafferty is a spinner of grand fantasies, a creator of fine lies, one of the great storytellers of science fiction.

Here he tells of an astonishing brand of adventurers seeking the Devil himself.  It is a tale of demons and changelings, monsters and mermaids—and of how it is not always serious to die, the first time it happens…”