1. Why more Fritz Leiber (you might ask) considering your scattered negative comments about his most beloved series of stories, Fafhrd and the Gray Mouser? In short, I enjoy his non-sword and sorcery short fiction—notably the stories in A Pail of Air (1964).

2. This looks like a fascinating collection “celebrating” America’s 300th future anniversary! I did not know that Edward Bryant edited volumes of short stories. He includes a wide range of authors—including those by Marge Piercy, Harlan Ellison, Jo Ann Harper (unknown to me), Carol Emshwiller, Vonda N. McIntyre, et al.

3. I finished Gary K. Wolf’s Killerbowl (1975) a few days ago and was blown away. Absolutely one of my favorite novels I’ve read so far this year! The bad taste left by The Resurrectionist (1979) is completely washed from my mouth. I snuck on the computer…. late at night…. and purchased the last of his three 1970s novels I didn’t own–A Generation Removed (1977).

4. A gift from a family friend…. with an otherworldly (and early) Vincent Di Fate cover.

Note: Images are hi-res scans from my personal collection. 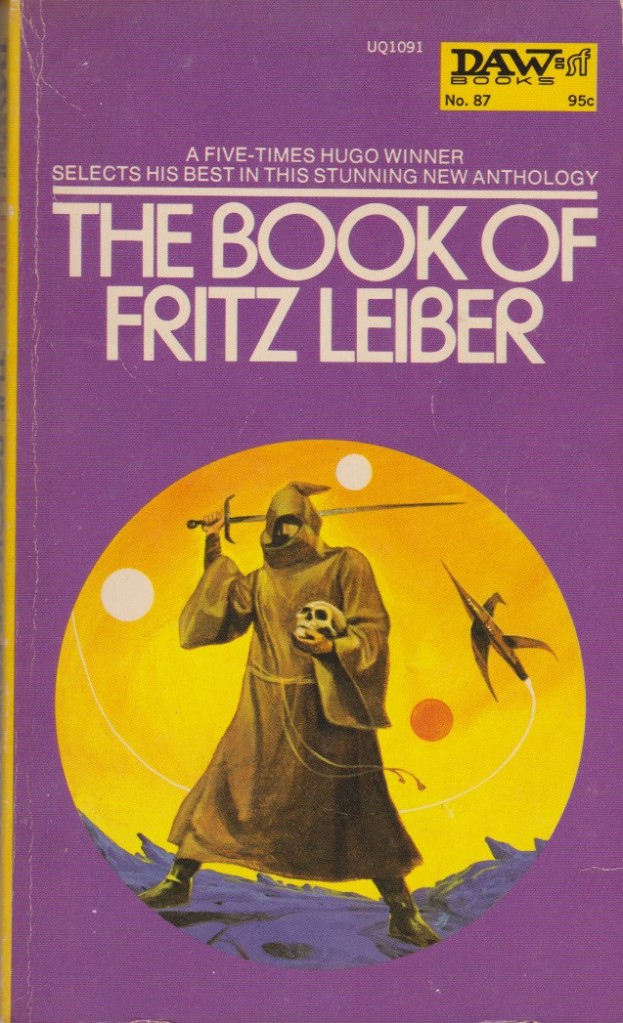 From the back cover: “Author’s prospectus: ‘There will be over sixty thousand words in all. The stories will make up two-thirds of them. There will be ten stories, all of them previously un-anthologized, most of them of recent origin. All the chief types of story I do will be represented: hard science fiction, Fafhrd-Mouser (sword & sorcery), romantic science fiction, Change War stories, cat stories, Lovecraft-related stories, supernatural-horror stories. The non-fiction will amount to about ten items. They will be of all sorts and closely related to the fiction. There will be book reviews, a pop. science article in the Asimov vein, my ‘Monsters and Monster Lovers,’ and so on. The stories and articles will alternate in the book, illuminating each other.’

And that’s the way it worked out, proving that Anthony Boucher was right when he said, ‘Fritz Leiber stands very firmly in the front rank of modern science fiction writers,’ and that Lin Carter was correct in saying, ‘Fritz Leiber is probably the finest living writer of sword & sorcery.'”

Short story contents: “The Spider,” “A Hitch in Space,” “Kindergarten,” “Crazy Annaoj,” “When the Last Gods Die,” “Yesterday House,” “Knight to Move,” “To Arkham and the Stars,” “Beauty and the Beasts,” “Cat’s Cradle.”

From the back cover: “America, You Ain’t Seen Nothing Yet!

After the last 200 years, what could the United States of America possibly do for an encore?

In this unique collection of spellbinding accounts you’ll:

Attend the nation’s 300th birthday celebration–the one where the people take a vote on which cities will live and which will die.

Witness the fatal beauty of an “aerosol sunset.”

Meet a beautiful bionic female who has fallen in love and discovered it is–was–to be a woman.

Roar down a deserted interstate in a forbidden Chrysler with a 106 year-old man who remembers America’s Bicentennial.

And explore in dozens of other ways the America in which your grandchildren will live.

Seventeen of America’s most gifted writers extrapolate today’s far-out notions into tomorrow’s everyday reality–and add some daring concepts that nobody has thought of before. It all adds up to a fascinating exercise in imaginative futurology that will keep you marveling.”

From the inside flap: “In America of the near future a youth-worshiping culture has franchised all teen-agers… and set in motion a frightening revolution. The all-powerful young have enacted laws that set a mandatory retirement age of fifty-five, at which time all “Gerrys” are forced to undergo physical examinations, all medication for illness is withheld, and euthanasia is prescribed for all infirm elders.

civilization’s deliverance from this hideous brave new world depends on an idealistic fifty-year-old, Hershel Lichter, a man chosen by the government to infiltrate and destroy the ranks of the underground Old People’s Army, a man who soon realizes that his only hope–and his country’s–is to join forces with the very “revels” he has been sent to eliminate.

In the same violent, riveting style of his first novel, Killerbowl, Gary Wolf has imagined an all-too-possible horror story that culminates in an eerie, futuristic Battle of Dunkirk.”

From the back cover: “Nuthatch on Noventa. A zombie factory.. a mad slasher… lecherous lizards… Was this any way to run a planet?

Muckrake magazine didn’t think so. They sent their ace reporter Jack Summer to rake up a little much about the corrupt government of Noventa.