Gifts!  From my fiancé!

Four more wonderful books…  I can’t wait to read J. G. Ballard’s The Burning World (1964) and Poul Anderson’s short story collection Time and Stars (1964)…  Ballard is a genius and Anderson is a solid writer who always produced fun plot-driven works (I suspect his Hugo nominated There Will Be Time (1973) will be similar).  Also, despite my general frustration with Clifford D. Simak’s ouvre, I’m intrigued by Why Call Them Back From Heaven? (1967)…. 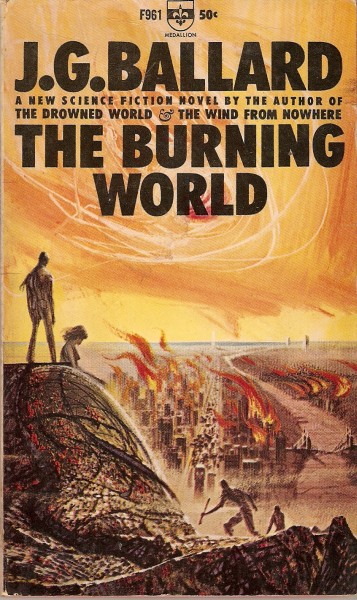 From the back cover: “World without Water.  ‘The Drought’ everyone called it, as day after day after day went by with no rain.  All over the world it was still ‘the drought,’ though the rivers had turned to trickles  and the trickles to mud as the earth dried, cracked open, and crumbled into dust.  Dust that was at first ankle-deep, then calf-deep, then knee-deep… Most of the world’s population streamed ocean-wards, choking the highways by the millions as they all sought the same thing: the last of the water.  And the sun beat down remorselessly on a world no longer capable of sustaining life…”

From Judith Merril’s review on the back cover: “Extremely provocative… deals with the effect on society of the kind of deep-freeze potential immortality we have heard so much recently.  Simak describes a rigid neo-puritan culture, a world of penny-pinching, body-saving, emotional isolationists, living as unremittingly for the ext Life as ever fundamentalist Christian did, because any man or woman who fails to provide an adequate investment sum to grow for him while he is frozen will be unable to compete in the reawakened society.  The only free men in such a society are the outcasts.  In the world of Forever Center, this means the rare criminals who have had a ‘death sentence’ and walk as living ghosts through the rest of their natural lives, aware that when they die, it will be for the last time, and forever…”

(Uncredited cover for the 1973 edition)

From the back cover: “Time travel-impossible!  There is no machine that can take you into time, past or future.  But what if you are born a time traveler?  Jack Havig did not know how he could cross the centuries merely by willing himself.  But the fact remained, he could.  And, thought Jack, if I can travel through time, there must be others!  So Jack Havig, human being extraordinaire, set out to see te world — the world of Ancient Rome, of the Byzantine empire, of the American Indian tribes, and ultimately the world of the future.  And, seeing the future, Jack found meaning in his life and a reason for his gift.  He must seek out others like himself throughout the centuries and together they must try to affect the future of mankind   For that future threatened the extinction of man’s entire civilization…” 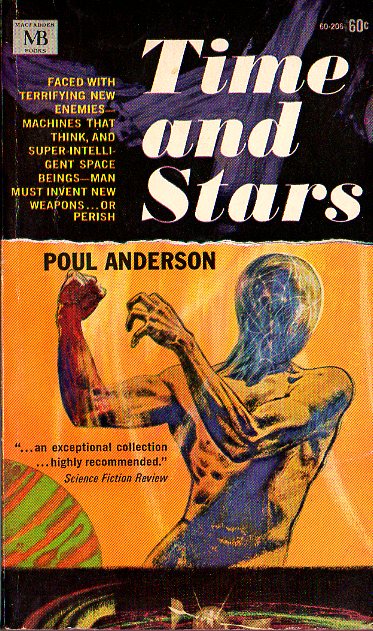 (Richard Powers’ cover for the 1965 edition)

From the back cover: “There is danger in the stars… when a spaceship crew encounters a race of machines that feed on human energy.  There is laughter in the planets… when an amorous spaceman gets shipwrecked on an uninhabited world with three lovely ladies.   There is suspense on earth… when a former pilot conceives of a daring plan to rescue three buddies stranded in space.  There are more stories to… giving you an exciting glimpse into the world of the future and the lands beyond the stars.”