Post-PhD job takes over… and books are not reviewed. But reading and buying still happens!

1. A supposed cult classic republished by Picador Press….. Has anyone read Smallcreep’s Day (1965)? Near the top of my “to read” pile. And I love Barbara Costall’s cover.

2. Early in the year I reviewed Conway’s short story “Mindship” (1971) in Universe 1 (1971), ed. Terry Carr. It was pretty solid. I tracked down the novel version which included the short as the prologue.

3. I was obsessed with Austin Tappan Wright’s Islandia (1942) as a kid. Not with the novel per se, which I never owned, but the lengthy and descriptive entry in Alberto Manguel and Gianni Guadalupi’s spectacular (and wonder inducing) The Dictionary of Imaginary Places (1987). And of course, the idea of  Wright slowly creating an imaginary world that could exist within our own and only “discovered” after his death resonated with a young me…

I’ve included the map from the entry in The Dictionary of Imaginary Places. 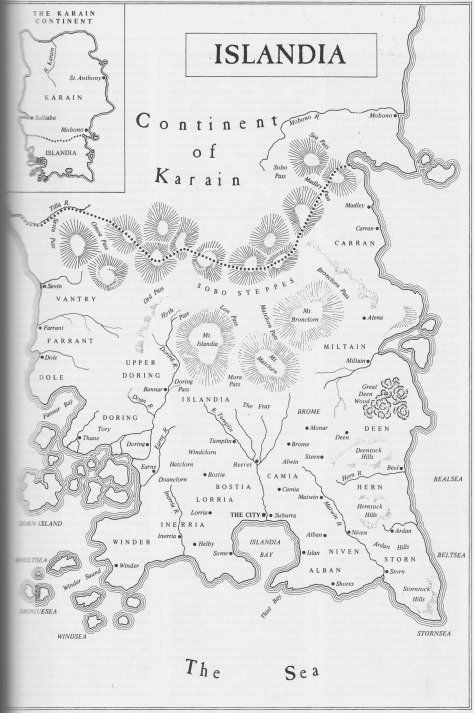 4. And finally, another John Wyndham novel… although the premise sounds downright bland and trite. But then again, I still have not read a lot of his work and I know he was a formative voice in SF.

(Barbara Costall’s cover for the 1973 edition)

From the back cover: “For sixteen years, Pinquean Smallcreep has slotted a certain type of slot into a certain type of pulley. Now, he feels he must find out why… and abandons his machine to search the factory for an answer.

What follows — wildly humorous, darkly visionary, profoundly challenging — is something no reader will ever be able to forget.”

From the back cover: “THE MINDSHIP was the break-through to the stars. In spite of work on Faster Than Light, hyperdrives, and such, it was the power of the mind that turned out to be the most certain directing force between the worlds. So the mindships came into being, driven forward by the lines of mental energy, directed by trained crews—and held together not by the navigator or the captain but by the man they called the cork.

He was just another man but he had the ability to siphon out the discords which could wreck a ship, to create the harmony without which starflight would be disastrous.

Kilgarin was such a “cork,” but he had deliverately grounded himself until they forced him to take up the mental reins again. It was their risk and they should have known better—because Kilgarin had ulterior motives no ship’s cork had a right to harbor.”

(Bob Pepper’s cover for a Signet edition with an unlisted date — 1970s?)

From the back cover: “ISLANDIA has been an underground classic for over two decades. Signet’s republication of this book brings before the public one of the most staggering feats of literary creation—a detailed history of an imagined country and a young American’s adventure there among the people he met, and with the woman he loved.

THE SPELL OF ISLANDIA is powerful. As Norman Cousins described the book’s power in the Saturday Review: “ISLANDIA, like life, was real; ISLANDIA was earnest. Little by little it became recognized for the miracle it was.'” 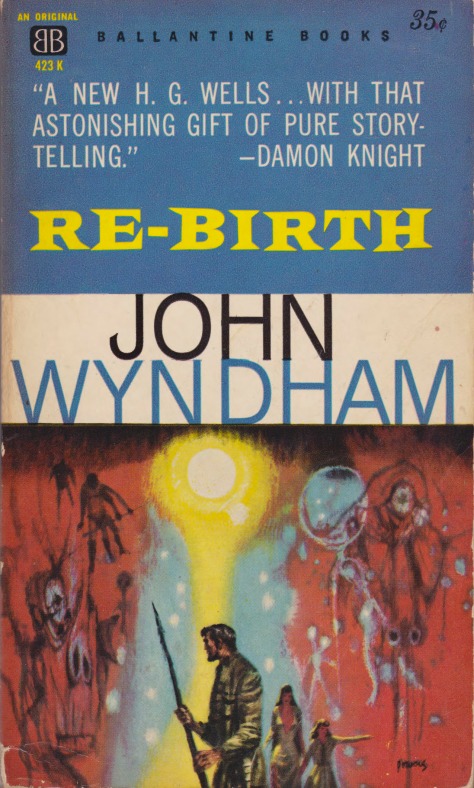 (Richard Powers’ cover for the 1955 edition)

From the inside flap: “‘Watch though for the Mutant…’ Long ago, perhaps in the twentieth century, a terrible catastrophe had fallen upon the world. You could still see the blasted, charred cities—and the Badlands where nothing grew at all.

But in the village where young David Strorm lived, they were trying to rebuild civilization. It was a time of hard labor in the fields, and sharp terror in the night—when the hideous raiding parties came out of the Fringes country. All this was part of life.

But there were other things David could not understand.

….the freakish plants and animals that sprang unpredictably from sound stock.

….the babies that were born, and then never seen or mentioned again.

….that law that said a Mutant was an abomination—a think to be hunted down and killed.

David tried hard to believe this, but he could not.

…Then one day he discovered that he he too was a mutant outcast, and there were others—Rosalind and Mark, Petra and Anne—who shared this fearful heritage…and that their forbidden powers might mean a re-birth for mankind…”